The regiment was created on February 21, 1684 as “Lorraine Infanterie” and given to N. de Monchy, Marquis d’Hocquincourt.

In 1742, during the War of the Austrian Succession, the regiment served in Flanders. In 1743, it was sent to Bavaria. From 1744 to 1745, it was stationed in Alsace. In 1746, it served in Flanders where it took part in the the capture of Mons and Charleroi and in the Battle of Rocoux. In 1747, it participated in the Battle of Lauffeld and in the siege of Berg-op-Zoom.

The regiment initially counted two battalions but an ordonnance, dated November 10 1756, brought it up to three battalions.

During the Seven Years' War, the regiment ranked 69th and was under the command of:

On December 10, 1762, when the French Army was reorganised, the regiment was disbanded and incorporated in the newly formed “Aunis Infanterie.”

An ordonnance, dated November 10, 1756, stipulated that the second battalion of the regiment would be sent to India and instructed to increase the effective strength of the regiment to 1,080 men (excluding officers) organised as follows:

Furthermore, for service in India, the second battalion would be split into two distinct battalions (2nd and 3rd).

For the duration of the Seven Years' War, the 1st battalion remained in Europe. The 2nd and 3rd were sent to the East Indies in 1757.

The 1st battalion remained in Europe during the entire war.

By August 1, 1757, the battalion was stationed on Belle-Isle in Bretagne.

On March 6, 1757, the 2nd and 3rd battalions of the regiment left Brest on board a squadron under the command of Admiral d'Aché to reinforce the French posts in India. The fleet pursued by British men-of-war loitered on the voyage to Île de France (present-day Mauritius). It then took three months on his passage to the Coast of Coromandel in India.

On April 25, 1758, d'Aché's squadron finally arrived before the British Fort St-David. The 2nd and 3rd battalions (a total of 983 men) then took part in the operations on the Coast of Coromandel. On April 30, these battalions were part of M. de Soupire's force who joined d'Estaing for the siege of Fort St. David until its capitulation on June 2. On December 9, the two battalions were at the Battle of Condore.

In 1759, they took part in the unsuccessful siege of Madras.

On January 22, 1760, 400 men of the regiment took part in the Battle of Wandewash. On March 11, they were retiring towards the boundary hedge of Pondicherry when they were charged with spirit by the Madras European Regiment dragoons and thrown into considerable confusion, having several men sabred. From September to January 1761, they took part in the defence of Pondicherry.

In 1761, after the surrender of Pondicherry, the 2nd and 3rd battalions returned to France.

On December 10, 1762, when the French Army was reorganised, the regiment was disbanded and incorporated in the newly formed “Aunis Infanterie.” 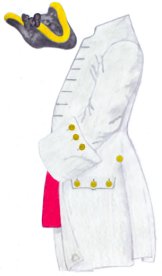 The drummers of the regiment wore the livery of the House of Lorraine: a chamois coat with chamois turnbacks and black cuffs; and chamois breeches. The coat was heavily decorated with yellow laces.