The regiment was raised on September 1 1743 by the Maréchal de Löwendahl.

During the Seven Years' War, the regiment ranked 106th and was under the command of:

On January 18 1760, when the German Infantry was reorganised, the regiment was disbanded, one of his battalions was incorporated into Anhalt Infanterie and the other into La Marck Infanterie.

In 1757, the regiment joined the French Army of the Lower Rhine. On May 5, the regiment was assigned to the blockade of Gueldre. It finally took its winter-quarters in the first line in the area of Bremen.

At the end of January 1758, the regiment was assigned to the army that Louis XV planned to send to Bohemia for joint operations with the Austrian Army. However, when Ferdinand of Brunswick launched his winter offensive in February, the regiment retired on the Rhine with the rest of the French Army. From March 30 to April 4, it was in the second line of Clermont's Army in the camp of Wesel on the Lower Rhine. By July, it had been transferred to Soubise's Army assembling near Friedberg in Hesse.

In June 1759, during the French offensive in West Germany, the regiment was part of the main army under the command of the Marquis de Contades and was deployed in the second line of the infantry centre. On August 1, during the Battle of Minden, the regiment garrisoned Minden, occupying the ramparts and the 3 bridgeheads. 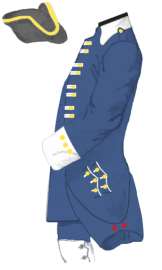 The colonel flag of the regiment was white with a white cross.

N.B.: the manuscript of 1757 illustrates a white colour decorated with a trophy of arms.

The ordonnance flags had a blue field with a 3 golden fleurs de lys surmounted with a golden crown and surrounded by yellow palm wreath. These flags were bordered by a wide purple band between two narrower white bands.