The unit was created in 1757 when Rittmeister Nicolaus von Luckner with 54 hussars which were formerly in the Dutch service joined the Hanoverian Army. These hussars were all foreigners commanded by Hungarian officers. During the year the unit increased to 90 men.

By 1758, Luckner was at the head of a squadron of 180 hussars organised in two companies.

At the beginning of 1759, an additional squadron was raised bringing the total strength of the unit to 434 men.

In 1760, the unit consisted of four squadrons, each of two companies of 86 men. By this time, the Luckner Hussars were mostly natives of Hanover.

The regimental Inhaber (proprietor) was Nikolaus Graf von Luckner, from 1757.

Throughout the war, the regiment was involved in almost every Kleinkrieg actions in the Western theatre of operation.

On July 26 1757, the unit was at the Battle of Hastenbeck where it was detached on the Weser.

On May 26 1758, the unique squadron of this unit was part of Wangenheim's Corps encamped at Dorsten. On May 31, this corps accompanied Ferdinand in his offensive on the west bank of the Rhine. On June 23, the unit took part in the Battle of Krefeld where it was posted on the left wing along with Hammerstein Cavalry, Drachenhausen Dragoons, Ruesch Hussars, and Grothaus Cavalry as part of the brigade under Lieutenant-General Spörcken. On September 19, the unit was part of a detachment sent towards Warburg against the camp of the French corps of Dumenil, it forced this corps to decamp and to pass the Diemel. On September 20, the unit pursued this corps beyond the Diemel, forcing it to retire to Kassel.

On January 7 1760, the regiment supported the 87th Keith's Highlanders in its attack on Beaufremont Dragons in the village of Eyesbach (probably Egelsbach or Esbach). The French dragoons were completely taken by surprise and the Allies took 80 prisoners along with 200 horses and all their baggage. By the end of January, the unit was attached to the Allied army of Ferdinand of Brunswick. On June 20 in the morning, the regiment attacked a detachment (Bercheny Hussards and the Volontaires du Hainaut) sent forward from Schlüchtern by Prince Xavier to reconnoitre the movements of the Hereditary Prince. The dragoons of the Volontaires du Hainaut were sent to the rescue and together with Bercheny Hussards, they drove back Luckner Hussars, taking 50 prisoners. On July 10, the regiment took part in the Combat of Corbach where it was attached to the left column under Lieutenant-General Griffin. On July 15, the regiment along with the 15th Light Horse joined the Hereditary Prince at Zwesten (present-day Bad Zwesten) for his planned attack on Glaubitz's detachment. On reaching the vicinity of Ziegenhain, the prince found that Glaubitz was encamped farther to the west, near the village of Emsdorf. His troops being exhausted by a long march, the Hereditary Prince halted for the night at Treysa. On July 16 at 11:00 a.m., he posted the regiment in a hollow near Speckswinkel, 1.5 km before Erksdorf. The Allies captured most of Glaubitz's detachment in the Engagement of Emsdorf. On July 31, the unit was present at the Battle of Warburg, incurring the wrath of the British command because it stayed to pillage the baggage of the retreating French. On August 10, a French party of 500 horse and foot drove part of Luckner Hussars out of Northeim. However, Allied jägers reinforced Luckner Hussars and together they forced one of the gates of Northeim and stormed the place. In this action, the French lost 150 men killed; and 11 officers, 300 foot and 30 dragoons taken prisoners and conducted to Hameln.

In 1761, the unit captured one flag from the Swiss Jenner Infanterie and two flags from General Belzunce (probably commanding Du Roy Cavalerie). These flags were sent to King George III.

The uniform was completely changed in 1760. The later uniform is shown in brackets in the table below. 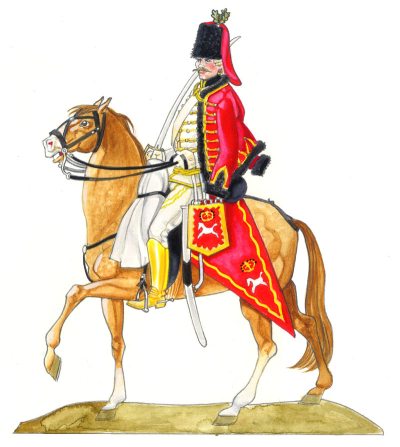 Individual information about the musicians has not been found. That said, given the very Prussian style, it can be assumed that the musicians would have followed the Prussian pattern.

Trumpeters would have worn the same uniform as any troopers.