The regiment was raised on February 14 1702 for Albrecht Friedrich Markgraf von Brandenburg-Sonnenburg who was Master of the Johanniter Order. For this reason, the "Johanniter-Kreuz" was used on the colours of the regiment. The regiment initially belonged to the garrison of Berlin.

During the War of the Austrian Succession, on March 9 1741, the regiment took part in the storming of Glogau and, on April 10 of the same year, in the Battle of Mollwitz. In 1745, it fought in the battles of Hohenfriedberg (June 4) and Soor (September 30) where it suffered heavy losses.

The numbering system (Stammliste) was first used by Leopold I., Fürst von Anhalt-Dessau (Der alte Dessauer) in the Dessauer Spezifikation from 1737. Around 1780 the numbers were used in the printed Stammlisten, still with some variations for the fusilier regiments. It became official by "Cabinets-Ordre" from October 1, 1806. The present infantry regiment was attributed number 19.

The unit was disbanded in 1806 after the capitulation of Hameln.

On August 26 1756, when the Prussian Army was ordered to proceed to the invasion of Saxony, the regiment was part of the centre column led by Frederick II. More precisely, it belonged to Margarve Karl's Corps. The centre column had concentrated in the area of Brietzen and advanced unopposed upstream along the Elbe River by Torgau and Wittenberg, leaving Meissen to its left. On September 6, it encamped at Rothschönberg and finally reached Wilsdruf. In October, after the capitulation of the Saxon Army at Pirna, the regiment incorporated all Irish troops formerly in the Saxon service. The regiment then accompanied Frederick back to Lobositz to bring back Keith's Army near Dresden. On October 22, it was part of the 10 battalions of Frederick's force who left Lobositz for Linai.

On May 6 1757, during the invasion of Bohemia, the regiment took part in the Battle of Prague where it was deployed in the first line in Ferdinand of Brunswick's Brigade. It took part in the close combat near Rocketnitzer Stream taking minor casualties. At the end of August, the regiment was part of the small Prussian army hastily assembled at Dresden by Frederick to head towards Thuringia and to offer battle to the Franco-Imperial Army invading Saxony. On November 5, at the Battle of Rossbach, the regiment was deployed in the first line of the infantry right wing under Lieutenant-General Ferdinand Prince von Braunschweig. On December 5 at the Battle of Leuthen, the regiment was deployed in Prince Francis of Brunswick's Brigade in the first line of the infantry centre. It attacked the churchyard and was completely ruined from continuous musket fire throughout the battle. The regiment then took part in the Siege at Breslau from December 14 to 21.

In April 1758, the regiment took part in the siege and recapture of Schweidnitz. It then participated in the unsuccessful invasion of Moravia. On October 14, the regiment took part in the Battle of Hochkirch where it was initially deployed in the village and immediately to its right. Its first battalion defended the big battery (10 x 12-pdrs) near Hochkirch while its second battalion bitterly defended the churchyard of the village. The regiment took the brunt of the murderous artillery fire into the village which consisted of both roundshots and howitzer fire. The second battalion stood with invincible stubbornness till its cartridges were spent. Some remnant of the battalion managed to get through.

From February 24 to March 4 1759, one battalion of the regiment was part of the small Prussian corps under the command of Major-General von Wobersnow who made an incursion in Poland against the Russian magazines. During this incursion, Wobersnow's forces destroyed provisions which would have supplied 50,000 men for 3 months. On August 12, the regiment fought in the Battle of Kunersdorf where it was deployed in the first line of the right centre as part of Thile's Brigade. The regiment suffered so heavily during this battle that it was later reorganised as a single battalion. On September 21, this battalion took part in the Combat of Korbitz where it was deployed in the first line of the right wing under Lieutenant-General Finck. When Hadik advanced Brentano's Corps against the Prussian right, Finck replied by sending Rebentisch with 4 grenadier battalions and Markgraf Carl Infantry against Brentano who was driven back. After driving back the Prussian cavalry, the Austrian cavalry redirected its effort on the Prussian infantry, charging it 5 or 6 times. The battalion of Markgraf Carl Infantry, after being charged twice, was pushed back and retreated under the cover of the Prussian grenadiers, loosing five 12-pdr guns and two howitzers.

In July 1760, the regiment was present at the unsuccessful Siege of Dresden. On August 20, it took part in the Combat of Strehla where it defended the field fortifications on the plateau. On November 3, it fought in the Battle of Torgau.

On July 21 1762, the regiment took part in the Battle of Burkersdorf. From August to September, it was at the siege and recapture of Schweidnitz. 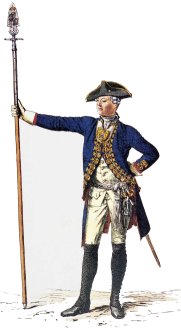 The narrow and wide drummer laces were of the same pattern, consisting of an orange braid bordered white and decorated with small "Johanniter-Kreuz".

Till 1763 the cross of the Knights of St. John of Jerusalem (in German the Johanniterorden) was on the flag because the Markgraf von Brandenburg-Schwedt was the grandmaster (Herrenmeister) of the Johanniter Orden.

N.B.: Two of these old colours (pre-1763) are in Vienna in the Heeresgeschichtliches Museum. They were lost in 1758 in a cold October night in the churchyard of Hochkirch.

User:Zahn for the information pertaining to the flags of the regiment.