Since 1702, the Bishopric of Paderborn had to contribute a contingent of 819 foot to the Reichsarmee in war time.

In 1757, after the Seven Years' War broke out, the Prince-bishop of Paderborn raised the required regiment to succour Austria threatened by Prussia. More than half of its troops were raw recruits.

The garrison place of the regiment was Paderborn and Neuhaus.

At the beginning of the Seven Years' War, the regiment consisted of a single battalion including 5 companies of fusiliers, 1 company of grenadiers and 2 x 4-pdrs battalion guns. The guns were served by artillerymen provided by the Münster contingent. During the war, its effective strength fluctuated from 582 to 465 men.

During the Seven Years War, the regimental Inhaber (who did not take the field) was:

During the Seven Years War, the regimental was under the command of:

In August 1757, after assembling in Paderborn, the regiment marched to Bonn where it arrived on August 9, leaving its Inhaber behind because of sickness. On August 13, it left Bonn and marched by Frankfurt to Hammelburg where it joined the two regiments of the Elector-archbishop of Cologne (Kurköln). Meanwhile, the contingent of Münster, consisting of the regiments Nagel and Elverfledt assembled at Meiningen. On September 16, the regiment joined these two latter regiments at Meiningen. This brigade was then assigned to the guard of the train of the Reichsarmee. In October, the regiment as part of the Baden-Durlach's Corps advanced towards Gera in Saxony. In November, the regiment defended the passage of the Saale River at Kösen. On November 4, it counted 582 men. It was not directly involved in the Battle of Rossbach. However, during the withdrawal of the Franco-Imperial Army, the regiment fought a rearguard action at Eckartsberg on the left wing, losing 7 men in this action. After this hasty retreat, the regiment was in a poor condition, several soldiers had no musket or weapon left. The regiment went into its winter-quarters in Eisfeld in Thuringia, near Hildburghausen. During winter, many soldiers died from disease but the regiment managed to replenish its ranks with recruits from Hildesheim.

On April 14 1758, the regiment left its winter-quarters and marched to Bamberg where the Nagel Brigade (Westpahlian Contingent) assembled. The regiment was then ordered to join the Reichsarmee Contingent destined to reinforce Daun's Army operating in Saxony. On May 29, this contingent arrived at the camp of Saaz where it made its junction with the Austrian Corps. The regiment then counted 539 men. In June, it came to grip with a Prussian force near Königswart, suffering 1 dead and 2 wounded during the action. On June 13, the regiment was assigned to Major-general Luzinsky's Division which covered the left flank of the Austro-Imperial army. The regiment acted as a Free Battalion and took part in several skirmishes. On August 28, the regiment was sent back to the Reichsarmme where it joined Nagel's Brigade in the Reserve under the command of General Hadik. During the siege of the Fortress of Sonnenstein near Pirna, the regiment did not suffer any loss. It then consisted of 518 men. From October 15, during the retreat of the Reichsarmee, it was part of Field-marshal Kolb's Corps who protected the flank of the army at Lauensteinn. On November 9, the army was at Freiberg, on November 21 at Zwickau. Each regiment then went to its winter-quarters, Mengersen Infantry being assigned to Schmalkalden in Hessen.

The campaign of 1759 started early in February, when Ferdinand of Brunswick advanced on Bergen. He detached his nephew, the Hereditary Prince of Brunswick with a division (a third of Ferdinand's force) to clear his left flank before continuing his march from Fulda. By that time, Mengersen Infantry (now counting only 508 men) along with Nagel Infantry was entrenched at Klein-Schmalkalden. The Allies captured 50 men of the regiment. The regiment did not share the fate of the troops from Münster who were taken prisoners. However, its ranks were so depleted that by mid-August 1759, during the Austro-Imperial campaign in Saxony, it was assigned to the protection of the baggage of the Prince of Zweibrücken. On September 21, the regiment probably took part in the Combat of Korbitz where it was deployed in Stolberg's Division. In December, when the regiment was in its winter-quarters around Bayreuth, it received 300 recruits from Cologne. This reinforcement brought the total strength of the unit to 682 men and allowed it to take the field during the next campaign.

In 1761, the regiment was part of Major-general Wartensleben's Corps. It was later transferred to Rosenfeld's Corps. In March, along with Kurköln Wildenstein Infantry, it occupied the heights of Saalfeld, to guard the Saale River crossing at the village of Schwarza. On April 2, it was attacked by a Prussian force. During the 5 hours long combat which ensued, the regiment was almost completely annihilated, a few escaped and 8 officers and 176 men finally surrendered and were taken prisoners.

In 1762, the regiment was re-established. However, it does not seem to have been involved in any operations of the Reichsarmee. By the end of the war, the new regiment counted only 228 men when the Reichsarmee was disbanded and the regiment returned to Paderborn. 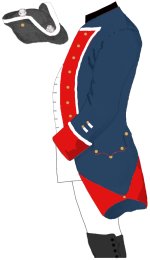 The regiment carried two colours: a Leibfahne and a Regimentsfahne. However no other information is known about these colours.