The origins of the Milices gardes-côtes (Coast-guard Militia) is much anterior to the establishment of land militia by Louvois. They can be traced back to the feudal right of the XVth century allowing lords to raise troops. The Garde-côtes units were destined to defend the maritime frontiers of France. Successive regulations stipulated the organisation and use of these units. Initially they were placed under the authority of the Amiral de France.

As soon as 1517, a decree specified the type of smoke signals (during daytime) and fires (during night time) to be used to give forewarning.

The decree of August 1681, finally completely regulated the Garde-côtes units. All coastal parishes, to the exception of sailors and of those assuming watch duty in towns, castles and fortresses, had to assume watch duty on the coast whenever required. Inhabitants of the coastal regions (up to 2 km from the coast) were compelled to this service.

Parishes subjected to this watch duty were grouped into Capitainerie de Garde-côte. At all time, inhabitants of these parishes had to be equipped with a musket, a sword and half a pound of powder or they could be fined. Up to the XVIIIth century, their main duty was to be on the lookout.

In a decree dated May 12 1696, the Garde-côtes units were designated as Milices Garde-côtes for the first time. Louis XIV kept for himself the right to appoint officers, even though the latter continued to be registered at the clerk's office of the Admiralty and to make oath to the Amiral de France.

The decree of November 23 1701, stipulated that the recruiting zone was extended to a distance of 2 lieues (about 8 km) from the coast. The inhabitants of these zones, between 18 and 60 years old, measuring at least 5 feet (1.62 m.) barefoot, had to supply the necessary number of militiamen. Their role too was widened. Now, besides being on the lookout, the militia were formed in mobile columns to oppose resistance to any landing operation. Regular infantry and dragoon regiments were barracked in nearby towns and, when required, marched towards landing places. For their part, the Milices Garde-côtes were responsible for the initial defence of the landing place while awaiting the arrival of regular troops. For these reasons, the parishes within the garde-côte zones were exempted from any contribution to the Milices provinciales. However, the Navy being constantly in need of sailors, who were mainly recruited in coastal regions, men from these regions, aged between 16 and 35 years old, were allowed to become sailors. This exemption also applied to all occupations related to the sea: sailor, mateys, bargees, carpenters, dry dock or construction workers. Furthermore, exemptions tolerated by intendants were numerous. Contrarily to the Milices provinciales, replacements were specifically authorised. Exercises were done once a month in peacetime (twice a month in wartime) on a Sunday under supervision of the captain or lieutenant of the company. Members of the Milices Garde-côtes benefited from a peculiar right: 10% of all wrecks found on the coast of their region were divided up among them  .

On December 23 1702, another decree forbade Garde-côtes to enlist in the regular army.

Between 1705 and 1716, a series of decrees profoundly reorganised the Milices garde-côtes. A decree of February 1705, made the charge of captain-general venal. The charge had now to be bought. In 1708, a decree introduced signals made with flags or cannon. In January 1716, the Milices Garde-côtes were reorganised. All parishes within 2 lieues (about 7.8 km) from the coast had to supply militiamen for guard and watch duty (sailors were exempted). To avoid any contesting, boundary stones were installed to clearly mark the recruitment territory. All inhabitants, between 18 and 60 years old, had to be equipped with a musket, a bayonet, a bayonet-scabbard, half a pound of powder and 2 pounds of musket-balls. Wherever possible, militiamen received a uniform similar to the uniform of marines. A militiaman who had served during 20 years of war and 4 distinguished actions was exempted from service for the rest of his life. All militiamen were exempted of service once they had served for 30 years. While on fatigue duty, the Milices garde-côtes took part in the construction of guardrooms, redoubts, battery platforms and entrenchments.

During the War of the Austrian Succession, the Milices Garde-côtes were assembled: in Bretagne, in 1744; in Provence, in 1746; and in Normandie, Poitou, Aunis, Saintonge and Guyenne in 1747. The decree of April 1 1748, created units of dragoons (200 men per province) in the captaincies of Aunis, Poitou and Saintonge. The dragoons were disbanded after the peace.

From the beginning of the Seven Years' War, similarly to the Milices provinciales, the Milices Garde-côtes were recruited by the drawing of lots, a system which saw many cheatings. Furthermore, there were so many exemptions that it was mainly the lower class which was targeted by these forced enrolments.

The Milices Garde-côtes also provided gunners for the coastal artillery pieces deployed in their parishes:

Militiamen received pay only if there had been assembled for more than four days.

After the Seven Years' War, seeing the poor results obtained by these militia, the government reduced their role.

During the first half of the XVIIIth century, most conflicts involving France took place on the eastern frontiers in Germany or in Italy, naval conflicts between France, Great Britain and the Netherlands essentially saw naval engagements or operations in the colonies. However, during the Seven Years' War, British threat on the French coasts became much more serious with frequent British incursions and, on the French side, preparations for an invasion of Great Britain, invasion which never materialised. In such a context, the Milices garde-côtes took a greater importance in the French defensive system. Throughout the war many decrees and regulations specific to various regions (Provence, Bretagne, Belle-Isle, Guyenne, Normandie, Picardie, Aunis, Saintonge, Languedoc...) were issued.

On May 26 1755, a battalion of Milices Garde-côtes (1,200 men) was assembled on the island of Belle-Isle, it consisted of 7 companies of fusiliers and 5 companies of gunners.

In 1756, the Milices Garde-côtes of the Generalities of Amiens, Rouen, Caen Poitiers, La Rochelle and Bordeaux were assembled.

In 1757, units of dragoons (total of 300 men) were raised in Guyenne. On June 5, Louis XV issued a decree reorganising the Garde-côtes, appointing 10 inspector-generals to control the organisation of batteries and signals. From then on, weapons (musket and bayonet, the sword being removed from the standard equipment) were supplied by the king. During wartime, they were kept by each militiaman, during peacetime, they were kept in magazines, being taken out only for exercises and reviews.

On April 9 1758, 4 companies (grouped in 2 squadrons) of dragoons were raised in Poitou and Aunis, and 4 other ones in Saintonge. Each company consisted of:

These dragoons were not destined to fight mounted. They were rather used as messengers.

By the regulation of May 15 1758, these militia were attached to the army and received a uniform. Men between 16 and 45 years old formed mobile companies assembled in camps or coastal places. When these companies needed to replenish their ranks, they chose soldiers form other companies of Milices Garde-côtes. Furthermore, squadrons of garde-côtes dragoons were added in each several provinces. Several parishes formed a company; several companies, a capitainerie générale or a battalion. There were 112 capitaineries générales for a total of 45,000 men in mobile companies:

Each company was commanded by a captain, a lieutenant and an ensign. Composition of companies varied widely from one capitainerie to the other and usually comprised between 50 to 100 men with 2 to 4 sergeants, 2 to 4 corporals, 2 to 4 anspessades and always a single drummer. In certain capitaineries, gunners were part of the companies while in others, they were organised in distinct companies.

Duration of service was 5 years for fusiliers and 6 years for dragoons. Despite these measures, the Milices Garde-côtes remained mere assemblies of peasants, unused to arms, often led by ignorant or old officers. They had no experience nor discipline and therefore a very low military value. Nevertheless, on September 11, the Milices Garde-côtes played a role in the French victory at the combat of Saint-Cast.

By a decree dated February 24 1759, the administration of the Milices Garde-côtes was transferred from the Navy to the Ministry of War and to the governors of each province. This decree also placed all coastal batteries, to the exception of those of the harbours of Brest and Toulon, under the tutelage of the Ministry of War. However, this did not put an end to the ceaseless conflicts of prerogatives between the departments of the navy and of war.

On March 12 1759, a new decree established 2 inspector-generals with, in each province, a provincial inspector. General-inspector Chevalier de Mirabeau was responsible of the coasts of Picardie, Normandie and Bretagne, while Inspector-General Comte de Beaujeu was responsible for Poitou, Aunis, Saintonge and Guyenne. By that time, the Milices Garde-côtes consisted of:

On May 31, 1759, the companies of Milices Garde-côtes of the Government Poitou, Aunis and Saintonge all contributed gunners for the creation of companies of Canonniers Garde-côtes. Each of these new companies consisted of 3 officers and between 80 and 100 gunners.

On April 19 1760, an additional inspector-general. M. de Surlaville, was appointed for Languedoc, Roussillon and Provence.

A decree dated March 16 1761, abolished the 3 charges of inspector-generals. 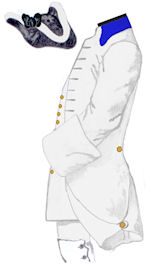 Armaments consisted of a musket and a bayonet (the sword had been removed from the equipment before the Seven Years' War).

Each dragoon equipped himself at his own expense. The uniform was red, the tricorne black laced yellow.

The uniforms of officers were grey-white lined blue with a golden epaulette on the left shoulder; blue cuffs and copper buttons; blue waistcoat, blue breeches and blue stocking. The uniform was laced silver or gold (probably gold). Officers wore a gorget and were armed with a musket.

The drummers of the militia battalions (and probably of their dragoons) wore the Royal Livery: blue coat lined red; red cuffs, waistcoat and breeches; laced with the braid of the small Royal Livery.

This article contains text translated from the following books which are now in the public domain: