The regiment consisted of 2 battalions. Each of these battalions counted 4 fusilier companies (140 men each) and 1 grenadier company (100 men). Furthermore, each battalion had 2 light 4-pdrs battalion guns.

The successive commanders of the regiment were:

In September 1764, the regiment was transferred to Ingolstadt to assume garrison duty.

In April 1757, the first battalion of the regiment was assigned to the Auxiliary Corps which was being assembled to serve with the Austrian Army on the basis of a subsidy contract settled with France on March 29. In August, its second battalion also joined this Auxiliary Corps which was assigned to the Austrian Corps under the command of Count Nádasdy. In October, the regiment took part in the siege and capture of Schweidnitz. On November 22, both battalions were at the Battle of Breslau where they formed part of the Corps of Count Seyssel d’Aix on the right wing of the second line. A few weeks later, on December 5 at the Battle of Leuthen, the regiment was part of Nádasdy's Corps on the left wing. It was deployed in the centre of this corps in the second line near the Württemberger Contingent whose fate they shared, being routed by the Prussian troops who attacked the flank of the left wing.

In April 1758, each Bavarian regiment contributed 1 company of fusiliers and 1 company of grenadiers to a converged regiment placed under the command of Colonel de la Rosée. During the Siege of Olmütz, this converged regiment distinguished itself against the Prussian besiegers but it lost more than 100 men in these combats. In July, the various companies forming this converged regiment rejoined their respective units. In August, the Minucci Regiment took part in the siege of Neisse. The regiment bravely defended its position when the Prussians made a sortie against the rearguard of the Austrian army. After the withdrawal of the Prussians, the regiment counted only some 1,000 men. On December 7, the owner of the regiment died. He was replaced by its former commander: Colonel Franz de la Rosée.

In January 1759, the regiment returned to Braunau, its garrison place. The regiment then remained in Bavaria till the end of the war.

Almost all sources mention yellow or buff distinctives and waistcoat. We have chosen to show the distinctives in a yellow buff color and the waistcoat in buff. 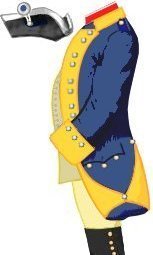 Schirmer mentions straw as the distinctive colour and straw breeches.

Staudinger, stangely, mentions some red waistcoats for this regiment, from 1761.

The horses of the mounted officers had a yellow shabraques and yellow pistol housings, all trimmed in white.

From 1759, the musicians wore the livery of La Rosée: yellow coat with bleu mourant (light blue) waistcoat, cuffs and facings. The coat was decorated with frogs, swallow nests and laces.

About the colours of the Bavarian infantry regiments , we know some models in use during the first part of the 18th century, before 1740; we know 4 models of flags which were in use between 1742 and 1745 and we also know the two models created in 1786 after the reunification of the bavarian and palatinate armies. So, between 1745 and 1786, information are unfortunately very scarce.

Prior to 1757, we think the old Max Emanuel pattern could have been taken out the arsenal and carried again. In 1757, we know this regiment received new flags. Perhaps these new flags were of the 1750s pattern.

In 1759, Obrist Franz von La Rosee received the privilege to carry the image of the Madonna of Dorfen on his Leibfahne.

Please note that, as Ordinarfahne, the 1742-1745 pattern Type "2 (or even type "4") could have been carried, but without the double-head imperial eagle.

information given by Herbert Moser, Dorfen