On the eve of the War of the Austrian Succession, in 1740, the duke Francesco III of Modena could field only his bodyguards (Guardia del Corpo) of 200 men and one infantry regiment: Palude Infantry. In 1740, Francesco III also raised 4 infantry national regiments, including Modena Infantry. These regiments each consisted of 4 companies of 150 men with drafts from the local Militia.

In April 1759, after the appointment of the Duke Francesco III as governor of Milan by Maria Theresa, there were some 2,700 Modenese soldiers in the territory of Milan assuming garrison duties. However, Modena Infantry remained in Modena. 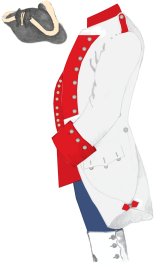 Officers wore uniforms similar to those of privates with the following differences:

In 1740, musicians were distinguished only by a blue and white braid on the coat edges and seams.

The drum barrel was made of brass and decorated with turquin blue points edged white.

Dr Marco Pagan for the reconstruction of the colours