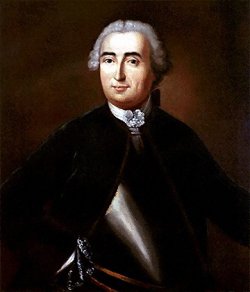 In 1718, Montcalm was placed in the charge of one Dumas, a natural son of his grandfather. This man gave him a good knowledge of Latin, Greek, and history. Young Montcalm had a taste for books and continued his reading in such intervals of leisure as camps and garrisons afforded. He aimed to be a "...honourable man, of good morals, brave, and a Christian. Secondly, to read in moderation; to know as much Greek and Latin as most men of the world; also the four rules of arithmetic, and something of history, geography, and French and Latin belles-lettres, as well as to have a taste for the arts and sciences...". He also learned to fence and ride.

In 1727, Montcalm became an ensign in the regiment of Hainaut.

In 1729, Montcalm's father bought him a captaincy.

During the War of the Polish Succession, in 1733, Montcalm saw active service under Berwick on the Rhine and was first under fire at the sieges of Kehl (1733) and Philipsbourg (1734).

In 1735, Montcalm's father died, leaving him heir to a considerable landed estate, much embarrassed by debt. The Marquis de la Fare, a friend of the family, soon after sought for him an advantageous marriage to strengthen his position and increase his prospects of promotion.

Accordingly, in 1736, Montcalm espoused Mademoiselle Angélique Louise Talon du Boulay. This union brought him influential alliances and some property. Madame de Montcalm bore him ten children, of whom only two sons and four daughters were living in 1752.

At the outbreak of the War of the Austrian Succession, in 1741, Montcalm took part in the campaign of Bohemia where he served as aide-de-camp to the Marquis de la Fare. He returned to France the following year.

On March 7 1743, Montcalm was made colonel of the Auxerrois regiment. On April 12, he was made a chevalier of the "Ordre de Saint-Louis".

In 1745, Montcalm fought in Italy under the Maréchal de Maillebois.

In 1746, at the disastrous action under the walls of Piacenza, Montcalm twice rallied his regiment, receiving five sabre-cuts (two of which were in the head), and was made prisoner.

In 1747, returning to France on parole, he was promoted to the rank of brigadier. He was soon after exchanged, rejoined the Army in Italy where he took part in the battle of Assiette in July. The same year, he was severely wounded by a musket-shot during the disastrous action of Exilles.

In 1749, Montcalm received the colonelcy of Montcalm Cavalerie.

During a visit to Paris in November 1755, the Minister d'Argenson hinted to Montcalm that he might be appointed to command the troops in Canada. Montcalm heard no more of the matter for a while.

Early in 1756, Montcalm received a letter sent from Versailles by D'Argenson on January 25. "Perhaps, Monsieur," it began, "you did not expect to hear from me again on the subject of the conversation I had with you the day you came to bid me farewell at Paris. Nevertheless I have not forgotten for a moment the suggestion I then made you; and it is with the greatest pleasure that I announce to you that my views have prevailed. The King has chosen you to command his troops in North America, and will honour you on your departure with the rank of major-general."

The Chevalier de Lévis was appointed as his second in command, with the rank of brigadier, and the Chevalier de Bourlamaque as his third, with the rank of colonel; but what especially pleased him was the appointment of his eldest son to command a regiment in France. Montcalm set out from Candiac for the court, and occupied himself on the way with reading the account of Charlevoix about Québec and Canada. On March 2, he informed his mother that his baggage had just gone off two days before. On March 15, he set out for Brest. On March 18, he was at Rennes. On April 3, he finally sailed from Brest on the frigate Licorne (32). The fleet accompanying him also brought two battalions to reinforce the French army in Canada: one of these battalions belonged to La Sarre Infanterie, the other to Royal Roussillon Infanterie. On May 11, Montcalm arrived at Québec. He immediately put Canada in a state of defence by dispatching troops to Fort Carillon (present-day Ticonderoga), Fort Frontenac (present-day Kingston) and Fort Niagara. He then organized the attack on Fort Oswego on Lake Ontario. After a brief siege from August 10 to 14, the fort surrendered. Montcalm destroyed the fortifications of Oswego as well as those of two auxiliary forts (Fort Ontario and Fort George). Leaving on August 21, he then returned to Montréal.

In the spring of 1757, Montcalm concentrated most of his army at Fort Carillon (Ticonderoga). On July 29, he started to advance in two columns for an expedition against Fort William Henry which stood near the shores of Lake Saint-Sacrement (present-day Lake George). From August 4 to 9, he besieged the fort. The British garrison surrendered after five days and was authorised to withdraw towards New England. Some Indian allies attacked the retiring British forces, killing several peoples. With much difficulty, Montcalm managed to stop the massacre. Fort William Henry was then destroyed and the French retired to Fort Carillon.

In 1758, Montcalm expected a British attack on Fort Carillon. He sent two battalions of Berry Infanterie and one battalion of Languedoc Infanterie to Carillon and joined them on June 25. He supervised the construction of a huge earthwork about 1 km in front of the fort. Meanwhile, a British Army under Abercomby concentrated at the former location of Fort William Henry. On July 5, it left this camp on a fleet of bateaux and whale boats, undertaking an [[expedition against Carillon. On July 6, it landed on the north shore of Lake Saint-Sacrement and immediately marched on Carillon in four columns. After a skirmish where Lord Howe was killed, the British returned to their landing place only to renew their advance on July 7, encamping near Carillon for the night. On July 8, Abercromby finally assaulted the French entrenchments in the Battle of Carillo. Montcalm commanded the centre, Lévis the right, and Bourlamaque the left. After several repulsed assaults, the British retired leaving some 2,000 men on the field. Carillon was Montcalm's greatest victory.

In 1759, the strategic situation had seriously deteriorated for the French in Canada. The previous year, the British had laid Siege to Louisbourg and captured this fortress. Similarly, several French forts on the western frontier were lost. With Louisbourg occupied, the British organised a huge amphibious expedition against Québec in the heart of Nouvelle-France. The expedition was placed under the command of Brigadier-General Wolfe. He besieged the city, defended by Montcalm, from July to mid September. Being unsuccessful in his attempts against Québec, Wolfe ordered his troops to burn the villages of the Saint-Laurent, hoping to lure the French out of their entrenched positions around the city. Finally, during the night of September 12 to 13, under the advice of his staff, Wolfe landed at Anse-au-Foulon, a small cove at the foot of the cliffs protecting Québec. In a matter of a few hours, his army was drawn up on the Plains of Abraham west of the city fortifications. Montcalm soon appeared at the head of his army. He rode along the ranks encouraging his men and then ordered general advance. The ensuing Battle of Québec soon turned to the advantage of the British troops. Montcalm was mortally wounded while trying to rally some units of his broken army. His soldiers held him up in his saddle while he entered Québec through the Saint-Louis Gate. Montcalm died early in the morning of September 14. He was buried in a shell hole in the Convent of the Ursulines.

Throughout his life, Montcalm had been pious in his soldierly way, and ardently loyal to Church and King.

This article incorporates text from the following books now in the public domain: