The regiment was raised on March 15 1749 with troops contributed by the 16 most senior regiments of cavalry.

In 1755, the regiment was stationed in Aimeries-sur-Sambre.

In 1756, the regiment ranked 68th and counted two squadron.

When the French Cavalry was reorganised on December 1 1761, the first squadron of the regiment was incorporated into Colonel Général Cavalerie while the second squadron was disbanded. However, effective incorporation seems to have taken place only on April 1 1763.

Somewhere between August 23 and September 6 1757, the regiment joined the Army of Saxony, led by the Prince de Soubise, in the area of Erfurt and Eisenach. On September 27, it was brigaded with Grammont Cavalerie under M. de Grammont in the second line of the left wing of the Franco-Imperial Army. On November 5, the regiment took part in the disastrous Battle of Rossbach where it was brigaded with Grammont Cavalerie and Poly Saint-Thiébault Cavalerie in Saint-Germain's Corps. At the end of the year, it took its winter-quarters in Immenhausen in Hessen.

On April 13 1759, the regiment took part in the Battle of Bergen where it formed part of the first line of the cavalry centre deployed behind the Wartberg under the command of the Comte de Beaupréau. In June, at the beginning of the French offensive in Western Germany, the regiment was part of the “Right Reserve” under the command of the Duc de Broglie who had taken position at Friedberg in Hesse.

By May 23 1760, the regiment was part of the left reserve of the first line of Broglie's Army, placed under the command of Saint-Germain. On July 31, the regiment took part in the Battle of Warburg where it was deployed in the first line of the centre. The brigade to which it belonged was the only one who withstood the initial charge of the British cavalry, even breaking the 1st King's Dragoon Guards. However, the French brigade in its turn was driven back by the Royal Horse Guards. By October 1, the regiment was at Düsseldorf, deprived of their horses infected with glanders; Castries sent them to Koblenz. 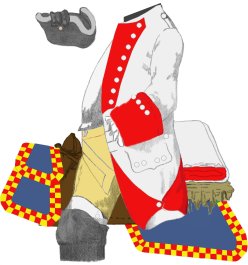