The regiment was created by decree on August 20 1715. It formed part of the garrison of Elvas.

From August 7 1762, the Portuguese army was camped not far from Abrantes, between this village and Zezere in place chosen by the count of Lippe-Bückeburg. Each day, the count was leaving on horseback, accompanied by some of his officers, to reconnoitre the country between Guarda and Castelo Branco, in order to establish his plan of operation. From this location, he could defend the entry to the valley of the Mondego. Observation posts in the vicinity of Viseu and Celorico were already occupied by forces under the command of general Townshend and field-marshal count of Santiago. By August 20, the first line under their orders consisted of 8 Portuguese infantry battalions, 67th Lambert's Foot, Moura Cavalry, a detachment of Burgoyne's Dragoons from the Voluntários Reais, and 10 pieces of artillery.

It is very likely that the uniform of this regiment in 1762 was similar to its uniform after the Lippe-Bückeburg's reform of 1764 for which we have a contemporary painting.

There is also a possibility that the coat had yellow lapels before the reform of 1764. 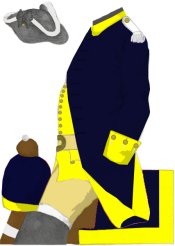 N.B.: in 1762, in a cloth order, the colonel of the regiment asks for 532 pairs of shoes and the same number of hats. He also orders 133 grosses of brass buttons to make the coats (1 gross is the equivalent of 144 units). Dividing the number of coat buttons ordered by the number of coats (532), we get the ratio of 36 buttons per uniform. However, we have no detail on the placement of these buttons on the uniform.