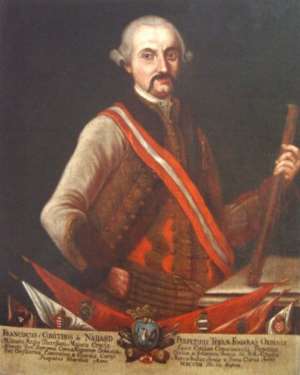 Portrait of Franz Leopold von Nádasdy auf Fogaras from the collection of SNM Betliar/SK, photo made by H. Skala

Franz Leopold von Nádasdy was born on September 30 1708 in a Hungarian family of old nobility. He was the son of Count Franz and Rosa Countess Schrattenbach.

From 1731 to 1735, Nádasdy took part in various campaigns in Corsica, Italy and on the Rhine. By 1734, he was colonel of the Czungenberg Hussars.

At the beginning of the War of the Austrian Succession, in November 1741, Nádasdy captured Neuhaus in Bohemia from a Franco-Bavarian Army. Then, while an Austrian Army besieged Prague, Nádasdy at the head of a body of cavalry raided the French frontier and occupied Neuburg in Upper Palatinate. The same year, Nádasdy was appointed General Feldwachtmeister (GFWM).

In 1742, Nádasdy bought the former Csáky Hussars (the regiment would remain his property till his death).

In 1743, Nádasdy served in Bavaria where he captured Wasserburg and Friedberg. After defeating Minucci at Braunau in March, he captured Oetting, Burghausen, Mülldorf.

In July 1744, Nádasdy took part in the crossing of the Rhine. Leading the Austrian vanguard. He then won engagements at Hagenau and Elsass-Zabern.

On February 15 1745, Nádasdy married Maria Maximilliana Countess Rottal. During this campaign, he served in Upper Silesia. On September 30, he took part in the Battle of Soor where he captured the war chest of the Prussian Army. The same year, he was promoted general of cavalry and received the commandment of the fortress of Ofen. The same year, he was promoted to Feldmarshall Lieutenant (FML).

In 1746, Nádasdy was transferred to the Italian theatre of operation. On March 17, he attacked a relief force at Guastalla. On June 16, he took part in the victorious Battle of Piacenza. On August 12, he was at the indecisive Battle of Rottofreddo. He also saw action at Novi and Genoa.

In February 1747, Nádasdy continued the Siege of Genoa during the Austrian retreat.

In 1754, Nádasdy was promoted to General der Cavallerie and commandant of Ofen.

In 1756, Nádasdy's wife, Maria Maximilliana, died. On September 26, Nádasdy was named Ban (viceroy) of Dalmatia, Croatia and Slavonia, thus replacing Batthyányi who had resigned from this post in the spring. Nádasdy would retain the charge of Ban until his death.

In 1757, Nádasdy raised new troops in the Lower Danube countries before joining Daun's Army who was advancing against the Prussian Army for the relief of Prague. On June 18, at the Battle of Kolin, Nádasdy led the decisive flank attack which gave victory to the Austrian Army. After this victory, he received the Great-Cross of the Maria-Theresien-Orden. On August 13, Nádasdy took part in the Combat of Landeshut. On September 7, Nádasdy led the successful attack on an isolated Prussian corps in the Combat of Moys. Finally, on November 13 after besieging Schweidnitz for only 16 days, he captured this important fortress. On December 5 at the Battle of Leuthen, Nádasdy led the cavalry of the Austrian left wing. He suffered from biased reports of his conduct during the battle and never assumed command again for the rest of the war.

In 1758, Nádasdy retired to Croatia where he dedicated his energy to the reorganisation of the two "Banal-Grenz-Infanterie-Regiments" of which, as the Ban (viceroy) of Croatia, he was also Inhabe (proprietor).

On the Day of Pentecost 1766, Nádasdy married again, this time with Baroness Susana Malatinsky de Felsö et Alsómalatin (1716-1786), widow of Josip Count Drašković. The - secret - marriage took place in Bukovac in Croatia and was made public only on May 25, 1766.

In 1778, Franz Leopold was promoted commander of the Army of Galicia in prevision of a war against Prussia. As soon as peace was signed, he abandoned the army. He was now 70 years old.

Nádasdy died on March 22, 1783, in Karlstadt (present-day Karlovac) in Croatia.