The regiment was initially raised in 1614 as the “Södermanlands Grand Regiment”, one of the nine grand regiments organised by Gustavus Adolphus. It incorporated various fänikors (smaller units of about 500 men) from Södermanlands, Närke and Värmlands.

In 1624, this grand regiment was organised into sub-units: three field regiments (Närke, Värmlands and Södermanlands) and one cavalry regiment. Two of these units were soon merged into a single one: the Närke-Värmlands Infantry.

On December 5 1682, the grand regiment was finally broken down into distinct and independent "Indelta" regiments, giving birth to the Närke-Värmlands Infantry regiments.

Four Värmlands companies remained at home to protect the border, while six companies were transferred to Livland in 1700-01 and with the King's Army thereafter. In Rehnskiöld's Corps 1705-06. Captured after Poltava. Reraised and went to Germany with 1.200 men in 1712. Captured at Tönningen but raised again. Norwegian campaigns of 1716-18.

At the beginning of the Seven Years' War, the regiment exceptionally consisted of 1,674 troopers in 2 battalions of 5 companies. Each company had 150 troopers and 11 officers, NCOs and musicians.

In August 1757, a battalion of the regiment (4 coys, about 600 men) was part of the expeditionary force sent to Pomerania under Field Marshal Mathias Alexander von Ungern Sternberg. The regiment remained in Pomerania until 1761.

In 1758, 3 additional companies (500 men) of the regiment were sent to Pomerania to reinforce the Swedish expeditionary force operating against Prussia. They joined the army in July. In September, the 2 bns were part of the field army, where they were deployed in Kalling’s Brigade in the second line of the infantry left wing.

By August 21, 1759, a detachment of 475 men of the regiment were part of the main army , which was posted on the Peene River. On September 10, 1 battalion took part in the naval combat of Neuwarp. In December, 7 companies of the regiment, under Captain Baron Nils Diurclow, reinforced the line of defence between Tribsees and Loitz; while 7 other companies formed part of the reserve and were transferred to Lingen’s Corps late in the month.

On October 3, 1760, a battalion of the regiment successfully defended Pasewalk against a Prussian attack.

At the opening of the campaign of 1761, 1 bn was part of the field army of General Augustin Ehrensvärd. On December 20, Major Knobelsdorf's detachment a detachment of the Närke-Värmlands Infantry. The same day, at Gültzow (present-day Gültzowshof just north of Loitz), another detachment (280 men) of the Närke-Värmlands Infantry, supported by a battery under Lieutenant Johan Gabriel Unge, repulsed a Prussian column (about 400 men of I./Hordt and 4 sqns of Belling Hussars). 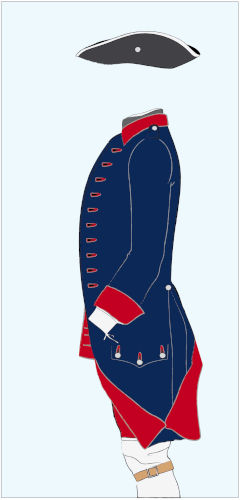 N.B.: contrarily to the custom in other armies, Swedish officers did not wear sash

Horses were equipped with blue housing with a red border.

Around 1720, the uniform of the drummers of the regiment had a red coat with a blue collar edged white, slit blue cuffs edged white, and blue turnbacks, the pockets of the coat were edged white and the seams were covered by a white braid; the waistcoat was blue; the breeches, yellow; the stockings, blue.

The drums were brass with the provincial coats of arms embossed on the front. The rims were blue with yellow edging.

Joseph Hillen-Keene for the information on the uniforms of the drummers of the regiment circa 1720.