Since 1699, there were Land-Bataillon (militia battalions). Each of these battalions consisted of 4 companies of 125 men each.

The battalion saw no action during the Seven Years' War. 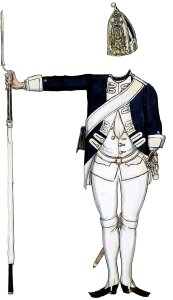 Privates were armed with a musket, a bayonet and a sabre.

Grenadier NCO's carried canes, their cuffs and cuff flaps were lined in silver and their sabre straps and cap pompoms were red, white and blue. They wore no lace buttonholes.

Grenadier officers wore grenadier caps; they were armed with carbines and had the small pouch on a gold-embroidered waist belt.