The regiment was raised on November 1, 1745 by Prince Guillaume Henri of Nassau-Saarbrück. It counted 2 battalions and recruited in Lower Alsace, Wesrgau and Landau as well as in the Counties of Saarwarden and Herbitzheim, and in the estates of the House of Nassau-Saarbruck.

In 1746, during the War of the Austrian Succession (1740-48), the regiment served in Flanders where it took part in the sieges of Mons and Charleroi, in the covering of the siege of Namur and in the Battle of Rocoux. In 1747, it fought in the Battle of Lauffeld. Shortly afterwards, in July, it was increased to three battalions. In 1748, it was at the siege of Maastricht together with Alsace Infanterie.

After the war, on February 1, 1749, the regiment was reduced to one battalion.

During the Seven Years' War, the regiment ranked 111th and was under the command of:

On March 20, 1758, while serving at Cologne on the Rhine, the regiment incorporated the single battalion of the disbanded Nassau-Ussingen Infanterie to form the new Nassau Prince Louis Infanterie. The colonel's company and the lieutenant-colonel's company of the Nassau-Saarbrück regiment became the two first companies of the 1st battalion while the company formerly under Sieur of Klingspoort, lieutenant-colonel of the Nassau-Ussingen regiment, became the first company of the 2nd battalion. The 13 other companies of the two former regiments were placed in the 1st or 2nd battalion according to the seniority of their commanding captains.

On January 18, 1760, when the German Infantry was reorganised, the regiment was increased to three battalions by the incorporation of Saint-Germain Infanterie.

In December 1762, when the French army was reorganised, the regiment was reduced to 2 battalions.

At the end of April 1757, the regiment arrived at Cologne for the planned invasion of Hanover. On July 1, it fought in the Battle of Hastenbeck. It then took part in the invasion of Hanover under the Maréchal de Richelieu and contributed to the capture of Minden and Hanover. At the end of the year, it took its winter-quarters in the first line of the French army at Ahlden and Grethem on the Aller River.

At the end of January 1758, the regiment was assigned to the army that Louis XV planned to send to Bohemia for joint operations with the Austrian Army. On March 20, the regiment was incorporated into the new Nassau Prince-Louis regiment. When Ferdinand of Brunswick launched his offensive in Western Germany in February, the regiment retired on the Rhine with the rest of the French army. From March 30 to April 4, it was in the second line of Clermont's Army in the camp of Wesel on the Lower Rhine. By July, it had been transferred to Soubise's Army assembling near Friedberg in Hesse.

On Tuesday January 2, 1759, at about 5:00 a.m., the regiment presented itself before the Sachsenhausen Gate of Frankfurt and was admitted as previously authorised on December 31, 1758. As soon as it had entered the town, the regiment ordered the town-guard to deposit arms and to admit five other regiments who easily captured Frankfurt. On April 13, the regiment took part in the Battle of Bergen where it formed part of the reserve of the left wing deployed in regimental columns behind the Warthberg. In June, at the beginning of the French offensive in Western Germany, the regiment was part of the “Right Reserve” under the command of the Duc de Broglie who had taken position at Friedberg in Hesse. The regiment finally took its winter-quarters in Ziegenheim.

In February 1761, the regiment was besieged in Ziegenheim, resisting for three weeks. This gave enough time to the Maréchal de Broglie to assemble a relief force. On February 25, the Allies were forced to raise the siege. On July 16, the regiment took part in the Battle of Vellinghausen where it formed part of M. de Closen's Brigade placed at the vanguard. The colonel-commandant of the regiment, the Baron de Zügmantel distinguished himself in this battle where the regiment captured three guns. On September 2, it was also present at the engagement of Osterode.

In 1762, the regiment took part in the defence of Kassel which capitulated on November 1. It then returned to France. On December 21, it was reduced to two battalions. 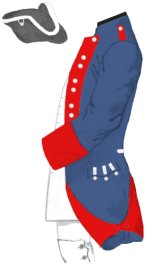 Colonel colour: white field; centre device consisting of the crowned arms of France (3 golden fleurs de lys surmounted by a golden crown) surrounded by two green laurel branches, the whole surmounted by a white scroll carrying the motto “HIS CONSECRO VIRES” (the manuscript of 1757 does not show any scroll). The lower outer canton carried a crouching golden lion.

Ordonnance colours (11): a white St. Andrew cross with a crowned blue escutcheon carrying a golden lion in each branch of the cross; centre device consisting of a royal sun; the right and left triangles were yellow while the upper and lower ones were blue; the upper triangle carried a white scroll with the motto “HIS CONSECRO VIRES” (the manuscript of 1757 does not show any scroll).

Menguy, Patrice: Les Sujets du Bien Aimé (a website which has unfortunately disappeared from the web).