This unit of dragoons was created in 1689 by Margrave Georg Friedrich von Ansbach with three companies of the Brandenburg contingent of the Reichsarmee and a fourth companies led by Captain Le Jeune.

In 1718, the regiment was reorganised in five squadrons, each of two companies.

In 1722, the regiment integrated several squadrons of light dragoons.

By the time of the Seven Years’ War, the regiment counted five squadrons and garrisoned Bahn, Freienwalde, Greifenhagen, Schoensliess, Schwedt and Wrietzen an der Oder. Replacement troops came from the Pomeranian districts of Bütow, Lauenburg, Neustettin and Rummelsburg and from the towns of Belgard, Coerlin, Greifenhagen, Neustettin, Rummelsburg, Ratzebuhr, Tempelburg and Zanow

In 1806, after the catastrophic campaign against Napoleon, the regiment was disbanded and some of its troops incorporated in the 5th Cuirassier Regiment.

On August 26, 1756, when the Prussian army proceeded to the invasion of Saxony, the regiment was part of the left column led by the Duke of Brunswick-Bevern. This column had concentrated in the area of Lübben, then advanced through Lusatia by Hoyerswerda and Bautzen, to Hohenstein (Sept. 8) and then to Lohmen north of the Elbe near Pirna. The regiment then took part in the blockade of Pirna from September 10 to October 16. At the end of the year, each squadron received 15 recruits.

In April 1758, the regiment took part in the siege and recapture of Schweidnitz. From May to July, it took part in the invasion of Moravia and in the siege of Olmütz. On August 10, the regiment was part of the corps who accompanied Frederick when he marched from Silesia to join Dohna to contain the Russian invasion of Brandenburg. On Tuesday August 22, this corps made a junction with Dohna at Manschnow. On August 25, the regiment fought in the Battle of Zorndorf. At the opening of the battle, along with Ruesch Hussars, they covered the gap between the Prussian left and right wings. During the afternoon, the regiment was transferred to the right wing where it counter-charged and drove off the Russian cavalry attacking the Prussian extreme right wing. On September 2, when it became clear that the Russian army was slowly retiring towards Landsberg, Frederick assembled the corps that he had brought with him from Silesia and left for Saxony where his help was badly needed. On October 14, the regiment took part in the Battle of Hochkirch where it was deployed in the centre of the second line in Zieten's cavalry brigade. On October 25, three squadrons of the regiment took part to the victorious engagement of Landskrone against the Austrian cavalry. On October 26 at Ebersbach, it captured 8 officers and 418 men from the Austrian Grenadier and Karabinier Corps.

From February 24 to March 4, 1759, five squadrons of the regiment were part of the small Prussian corps under the command of Major-General von Wobersnow who made an incursion in Poland against the Russian magazines. During this incursion, Wobersnow's forces destroyed food supply which would have supplied 50,000 men for 3 months.

The uniforms depicted in this section were introduced in 1745. 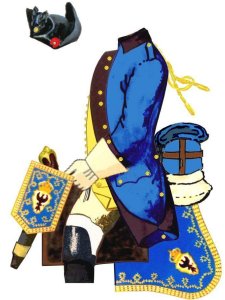 NCOs wore the same uniform as the troopers with only two exceptions: 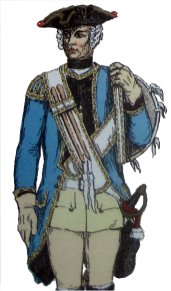 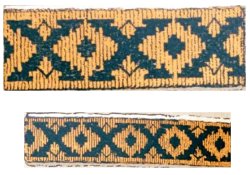 Drummers of the regiments of dragoons wore the same uniform as the troopers but decorated on the seams with yellow braids bordered white and decorated with a black pattern.

Standards were made of damask. They were swallow-tailed and measured some 50 cm along the pole, 65 cm from the pole to the extremity of a point and 50 cm from the pole to the centre of the indentation. The cords and knots were of silver threads. The pole of the standard was a yellow tournament lance reinforced with iron hinges. The golden spearhead wore the crowned monogram of Frédéric Wilhelm (FWR).

The regiment lost at least one Eskadronstandarte during the War of the Austrian Succession. Therefore it carried a mixed set of squadron standards (the 1713 “FWR” pattern and the 1742 “FR” pattern. However, its Leibstandarte dated from 1713, and was of the “FWR” pattern.

Our reconstructions of the standards of the “FWR” pattern are based on an original kept at the Heeresgeschichtliches Museum in Vienna, which shows evidence of a lot of repairs, some of them quite crudely. On this original, the “landscape” beneath the eagle is missing and both the eagle and the scroll sit much lower than is usual in the sketches from the Dessauer Manuscripts of 1729 and 1737, and in a photo of a dragoon Eskadronstandarte captured by the Russians, either at Paltzig or at the Zeughaus in Potsdam.

Since, the “landscapes” are a feature of the “FWR” pattern flags from 1713 until 1740, we decided to include them in our reconstructions. They were different for each regiment and, as captured examples of infantry flags show, even varied somewhat from flag to flag within the same regiment. The infantry flag landscapes could be quite ornate, as they were painted onto the colour. The cavalry landscapes were embroidered on and are therefore much simpler.

The eagles on the “FWR” pattern standards also varied. Each of the two surviving flags has a very different eagle.