The regiment was created during the War of the Spanish Succession (1701-13) according to a royal decree issued on 1 April 1707 by the Duke of Osuna at his own expense for Colonel Diego Gonzalez. It recruited in Andalusia. In 1708, the regiment served with the Army of Extremadura and took part in the sieges of Moura and Serpa. In 1709, it participated in the Battle of La Gudiña and in the blockade of Olivença; in 1710, in the battles of Almenar and Saragossa. After the defeat, it escorted the king to Valladolid. In 1711, the regiment returned to the Army of Extremadura. In 1712, it took part in the unsuccessful siege of Elvas. In 1713, the regiment was transferred to the Army of Catalonia where it fought against bands of Catalan migueletes until 1714. When peace was signed, the regiment was still stationed in Catalonia.

On February 10 1718, the regiment was renamed “Numancia Dragones”. In June, it was transported from Barcelona to Sardinia and then to Sicily where it took part in the siege and capture of Palermo and in the blockade of Syracusa. In 1720, it re-embarked for Spain.

In 1732, the regiment took part in the reconquest of Oran and Mers-el-Kebir.

In 1735, the regiment was allocated to the army of observation stationed in Extremadura. In 1737, when this army was dissolved, the regiment took up cantonments in Almendralejo and Villafranca.

In 1742, during the War of the Austrian Succession (1740-48), the regiment crossed the Pyrenees and marched to Dauphiné where it joined French units for the planned invasion of Piedmont. In 1743, it was at the capture of Montiers. In 1744, it escorted provision convoys destined to the troops attacking the Lines of Monte Albano. In 1745, it captured Codogno. In 1746, it occupied Vercelli, Guastalla and Reggio and fought in the engagement of Codogno and in the Battle of Piacenza. In 1747, it returned to Spain.

In 1762, the regiment joined the army assembling in the camp of Zamora where it was deployed on the right wing of the second line. On May 1, the regiment set off for the invasion of Portugal, entering into the province of Trás-os-Montes. It encamped at Montemarta within sight of the bridge of the Ezla. On May 9, it was at the capture of Miranda do Douro. On July 16, it occupied Ciudad Rodrigo where it remained until July 28. It then crossed the frontier and bivouacked in Aldea del Obispo awaiting for the division of the Count of Maceda. From August 6, during the siege of Almeida, the regiment was posted on the left of the first line. The place surrendered on August 25. On September 5, the regiment was incorporated into the division of General Rivaguero which was detached to the Zarza. On September 11, the regiment contributed to the capture of Salvatierra. On October 31, it took up cantonments in Arroyo del Puerco where it remained until November 14. It then marched to Montijo where, on November 25, it was ordered to cease hostilities.

In 1763, the regiment was sent to Lower Andalusia. 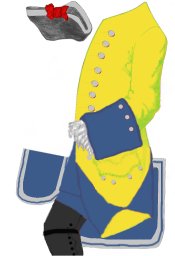 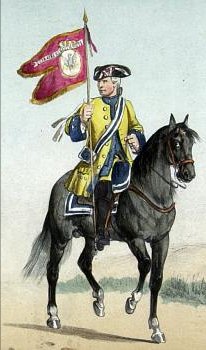 Swallow tailed guidon fringed in gold; centre device consisting of a phoenix burning in its nest, surrounded by the banners and flags taken by its brave dragoons.