After the War of the Spanish Succession, Emperor Charles VI brought with him in Austria three Spanish cavalry regiments: the Galbes Dragoons, and the Vasquez and Cordova Cuirassiers. Each regiment counted 600 horse. They had all honourably taken part in the campaigns in Spain and then served in the war against the Turks in Hungary in 1716 and 1717. In 1716, they were at the battle of Peterwardein and at the siege of Temesvar. In 1717, they took part in the siege and battle of Belgrade.

On September 28 1721, these three regiment were amalgamated into a single one: the Galbes Cuirassier Regiment. The new regiment consisted of 12 cuirassier companies and 1 carabinier company. Its recruits now came from German countries.

In 1727, an Auctionskompanie was raised. Part of this company was transferred to the Infant von Portugal Cuirassiers in 1731.

From 1737, the regiment served in Hungary against the Turks for three campaigns. In 1740, at the end of the war, the regiment was stationed in the Siebenbürgen Country (present-day Transylvania).

During the War of the Austrian Succession, the regiment took part in the battle of Mollwitz in 1741 where it had 6 men killed and 35 wounded. In November of the same year, it was brigaded with Philibert Dragoons under the Prince von Birkenfeld in the cavalry division of Baron Linden. In 1742, the regiment took part in the siege of Prague. By the end of September it had been transferred to the Count of Bentheim's Brigade. In 1743, the regiment served on the Rhine. In 1744, it was assigned to Vienna. In 1745, it was back in Germany. In 1746, it served in Italy. In 1748, at the end of the war, the regiment was stationed in Hungary.

At the outbreak of the Seven Years' War, in 1756, the regiment was stationed in the Héveser Komitat in Hungary and counted 793 men and 787 horses. On October 1, the regiment took part in the Battle of Lobositz where it was deployed in the first line of cavalry of the right wing under the command of Lieutenant-General Radicati. However, these cavalry units were deployed in the centre of the Austrian positions. At 11:00 a.m., when the fog finally raised the Prussian cavalry attacked the Austrian right wing between Kinitz and Radostitz. The Austrian cavalry deployed there in three lines impetuously counter-attacked. However, outnumbered three to one, the Austrians were forced to retire and were pursued up to Sulowitz. The Prussian cavalry was now alone, advancing in the crossfire of the Austrian artillery and infantry from Lobositz and from the heights behind the Morellenbach. The Prussian cavalry halted. In a wink, the regiment, led by Colonel Count Johann Bettoni, along with Stampach Cuirassiers charged at the gallop from Bukowitz and attacked the disordered Prussian cavalry while Hadik Hussars charged them in flank. The Prussian cavalry was thrown back and retired under the cover of its infantry where it rallied. During this battle the regiment suffered heavily. Several of its officers were killed: Rittmeister Nagy and Targa, Lieutenant Huss and Cornet Güntner. Others were wounded: Lieutenant-Colonel Count Verneda (who later died of his wounds) and seven other officers. Major Count Barzicka was taken prisoners along with another officer. Furthermore, several troopers were killed or wounded.

In June 1757, during the Prussian invasion of Bohemia, the regiment was part of the relief army sent to rescue the Austrian army besieged in Prague. On June 12, it was at the camp of Goltsch-Jenikau (present-day Golčův Jeníkov) brigaded with the Jung-Modena Dragoons under Major-General Castiglione in the division of Baron Lützow in the Reserve-Corps. Its six squadrons and its carabinier company amounted to 610 horse. During this campaign, the regiment took part in the Battle of Kolin on June 18 where it was part of Castiglione’s Brigade in the corps of Count Colloredo held in reserve behind the centre. A few weeks later, on July 21, Major Baron Barco captured an important convoy near Kamnitz (present-day Kamenice). Later during the same year, the regiment fought at the Battle of Breslau on November 22 where it was deployed in Count Ludwig Starhemberg's Brigade, in the second line of the cavalry left wing under Count Stampach. It supported the infantry left wing. On December 5, the regiment took also part in the Battle of Leuthen where it was deployed in Stahrenberg's Brigade in the second line of the cavalry left wing under General Serbelloni. During this battle, Lieutenant-Colonel Count Barczicka was grievously wounded. He died of his wounds a few days later.

By August 2 1758, the regiment was serving in the first line of the Austrian Main Army under the command of Daun near Jaromirs. Daun was following up the Prussian army retiring through Bohemia after the failure of the Prussian invasion of Moravia. On October 14, the regiment fought in the Battle of Hochkirch where it was deployed on the extreme right wing, to the east of Kotitz, in Buccow's cavalry column, with the Anhalt-Zerbst Cuirassiers under General Count Hohenzollern. It attacked the covering force of General Retzow at Weissenberg, inflicting it heavy losses. Even though the Prussian right wing was already defeated, the left wing still held its ground. The colonel of the regiment, Baron Brockhausen, requested the permission to charge the infantry of this wing in order to force the decision. When he received the authorisation, he placed himself at the head of his regiment and attacked the Grenadier Battalion of Prince August von Preussen across difficult terrain. Brockhausen struck the Prussian grenadiers in rear and flank with such determination and courage that soon about 600 men were obliged to deposit arms. This successful attack forced the entire Prussian left wing to retire. Rittmeister Baron Ravizza then impetuously fell upon the flanks of the disordered Prussian infantry with his carabinier company. In a wink, he received support from two other carabinier companies and he threw his unit in a short and bloody combat where he was wounded. The carabiniers captured 7 flags. After this battle, Colonel Baron Brockhausen and Rittmeister Ravizza both received the Maria-Theresia Order.

By mid August 1759, five squadrons of the regiment were part of Daun's Corps posted in Silesia. On September 2, they took part in the Combat of Sorau where they were brigaded under Major-General O'Donell. The carabinier company was converged with similar units in the brigade of Fürst Karl Lichtenstein.

In 1761 and 1762, the regiment was part of the army operating in Saxony. In 1762, the carabinier company served under General Ried during the attack of the Prussian advanced posts at Eula. 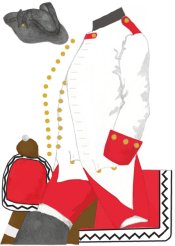 Uniform in 1762 - Source: Richard Couture and Ibrahim90 and from an illustration of the Albertina Handschrift

Donath illustrates the lace along the saddlecloth and sabretache as white with black squares.

Donath illustrates a pentagonal sabretache while the Bautzener Bilderhandschrift of 1762 shows a more traditional one.

Musicians of the regiment rode white horses. Their uniforms was similar to those of the troopers. However, blue swallow nests distinguished them from the troopers.

The brass trumpets had a royal blue silk apron decorated on both sides with a large white “B” and with blue fringe and tassels.

The aprons of the kettle drums were white decorated with three small blue and red standards with the cipher “MT” between the small standards. The aprons were fringed in gold

Colonel Standard (Leibstandarte): White field with a gold fringe, a blue flagpole and a gold spearhead decorated as follows

Reconstruction based on a standard preserved at the Heeresmuseum in Vienna 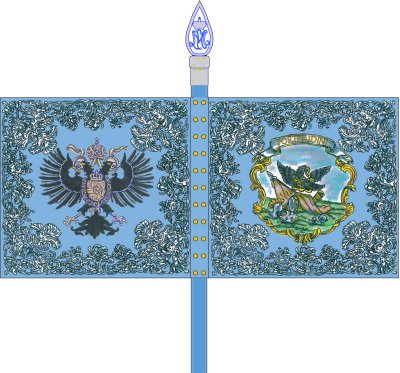