Difference between revisions of "Oertzen Dragoons"

The regiment was raised on January 3 1705 for the son of baron von Derfflinger.

The regiment was disbanded in 1806 after the capitulation of the Prussian army to Napolean.

On August 26 1756, when the Prussian army proceeded to the invasion of Saxony, the regiment was part of the left column led by the prince of Bevern. This column had concentrated in the area of Lübben, then advanced through Lusatia by Hoyerswerda and Bautzen, to Hohenstein (Sept. 8) then to Lohmen north of the Elbe near Pirna. On October 1, the regiment took part to the battle of Lobositz under lieutenant-general Schwerin. During this battle, it lost 29 men. On October 2, the regiment was part of Bevern's force sent to lay hold of Tschischkowitz (actual Cizkovice) on the road towards Budin. On October 23, when Keith's army left Lobositz to return to Pirna, the regiment formed its rearguard. The same day, the regiment joined Frederick II at Linai to cover Keith's advance. On October 28, the whole force reached Gross-Sedlitz near Pirna and the regiment took its winter quarters soon afterwards.

On July 29 1758, during the Prussian retreat after the failed invasion of Moravia, the regiment covered the crossing of the Mettau by the main army. On August 10 1758, the regiment was part of the corps who accompanied Frederick when he marched from Silesia to join Dohna to contain the Russian invasion of Brandenburg. On Tuesday August 22, this corps made a junction with Dohna at Manschnow. On August 25, the regiment fought at the battle of Zorndorf where it formed part of the first line of the cavalry left wing. It lost 89 men during this battle. On September 2, when it became clear that the Russian army was slowly retiring towards Landsberg, Frederick assembled the corps that he had brought with him from Silesia and left for Saxony where his help was badly needed. On October 14, the regiment took part to the battle of Hochkirch where, as part of the Reserve, it was initially deployed en potence between Steindörfel and the Birkenbusch. The previous night, its troopers had kept their mounts saddled. This allowed them to react quickly to the first Austrian attack and to rescue Prussian prisoners before being forced to retire. Around 7:00 AM, the regiment was among Zieten's corps when it charged the Austrian grenadiers, thus preventing the Austrians from turning the Prussian right flank. On October 25, the regiment took part to the victorious engagement of Landskrone against the Austrian cavalry.

On November 3 1760, the regiment took part to the battle of Torgau. 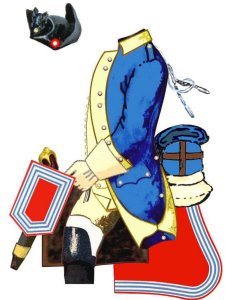 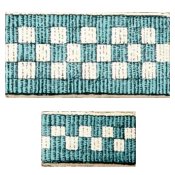 Drummers of the regiments of dragoons probably wore the same uniform as the troopers but decorated on the seams with a white lace decorated with 2 blue lateral bands and a central checker board pattern of white and blue squares.

Standards were made of damask. They were swallow-tailed and measured some 50 cm along the pole, 65 cm from the pole to the extremity of a point and 50 cm from the pole to the centre of the indentation. The cords and knots were of silver threads. The pole of the standard was a white tournament lance reinforced with iron hinges. The golden spearhead wore the crowned monogram of Frédéric Wilhelm (FWR).