This tercio of cavalry was raised in the estates of Pavia in Lombardy on May 1 1684 from five companies of Croatian horsemen. On April 9 1685, it was increased to twelve companies to form a Tercio de dragones arcabuceros under the command of the Count of Sheldon

In 1687, on the eve of the Nine Years' War (1688–97), the tercio was sent to Milan. In 1692, 200 men of the tercio joined the army of the Duke of Savoy and took part in the capture of Pinerolo, Susa, Cassale and Embrun, before occupying Gap. In 1693, the tercio took part in the attack of the Fort of Santa Brigida, outside Pinerolo, and in the Battle of Marsaglia; in 1695, in the siege and capture of Cassale. In 1696, the tercio returned to Lombardy and took quarters at Pavia.

In 1701, at the outbreak of the War of the Spanish Succession (1701-13) the tercio fought in the Combat of Carpi and in the Battle of Chiari (other accounts mention the French Mauroy Cavalerie instead of the Spanish Monroy Dragoons in these two actions) and was later surprised while guarding a bridge at Urago. In 1702, it participated in the reliefs of Mantua and Borgoforte, and in the Battle of Luzzara. In 1704, it campaigned in Piedmont and took part in the blockade of Turin. In 1705, it raided Imperialist outposts along Lake Garda and the Adige and participated in the capture of Nice, in the siege of Mirandola and in the Battle of Cassano. In 1706, it took part in the Battle of Calcinato, in the defence of Turin and in the disastrous Battle of Battle of Turin. In 1707, when Spain agreed to evacuate Lombardy, the regiment marched through France towards Pamplona. In 1708, it joined the Army of Extremadura. In 1709, it took part in the Battle of La Gudiña; in 1710, in the decisive combats of Brihuega and Villaviciosa; and in 1711, in the siege of Gerona. In 1713 and 1714, it fought against the Catalan insurgents.

In 1715, the regiment was stationed in Andalusia.

In 1720 and 1721, the regiment served on the coasts of North Africa, defending Ceuta. It then returned to Andalusia.

In 1730, the regiment was transferred from Andalusia to Catalonia.

In 1733, at the outbreak of the War of the Polish Succession (1733-35), the regiment embarked at Barcelona for Italy where it joined the Army of Tuscany who occupied Florence. In 1734, the regiment took part in the reconquest of Naples and in the Battle of Bitonto before being transferred to Sicily where it was at the capture of the Castle of Palermo. In 1736, it re-embarked for Spain.

In 1741, during the War of the Austrian Succession (1740-48), the regiment set off from Spain and marched to Dauphinée where a Franco-Spanish army was assembling. In 1742, it was successively posted at Conflans, Barraux and Saint-Martin. In 1744, it took part in the siege and capture of Demont, in the action of Caraglio, in the unsuccessful siege of Coni and in the Battle of Madonna dell'Olmo; in 1745, in the Battle of Bassignano, in the siege and capture of Valencia, and in the storming of Cassale; and in 1746, in a surprise attack on Codogno, in the battles of Piacenza and Rottofreddo. It then retreated to Provence. In 1747, the regiment returned to Spain and was stationed in Catalonia.

In 1750, the regiment was transferred to Old Castile.

On June 16 1762, during the Spanish invasion of Portugal, the regiment was ordered to reinforce the Spanish army encamped at Chaves. On July 8, it set off from Chaves for Ciudad Rodrigo. 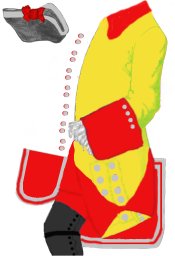