Since 1494, at the outbreak of the Italian Wars (1494-1559), there were units designated as bandes d'au delà des monts (bands from beyond the mountains) at the service of the King of France. They were charged with the conquest and permanent occupation of Piémont and other countries beyond the Alps.

In 1552, when Henri intervened against the Emperor, 20 black ensigns of the Bandes de Piémont were with his army.

In 1558, these Bandes noires de Piémont were organized into a regular regiment by King Henri II.

During the French Wars of Religion (1562-1598), on May 27 1569 at the camp of La Rochefoucauld, the regiment received an official status. The same year, it campaigned in Poitou and defended Poitiers. In January 1570, the regiment took part in a failed attempt to capture La Rochelle and, on June 15, in the combat of Sainte-Gemme where it suffered heavy losses. By 1572, the regiment garrisoned Abbeville. In 1575, it took part in the combat of Dormans; in 1577, in the siege of La Charité-sur-Loire; in 1579, in the failed relief of Saluces.

In 1584, the colonel of the regiment, M. de Brissac, having declared himself for the Catholic League, lost his regiment who took its definitive name of “Piémont”. In 1585, the regiment took part in the campaign in Provence; in 1586, in the siege of Chorges and in all expeditions along the Rhône; in 1592, in the capture of Digne; in 1593, in the captures of Cannes and Antibes. In 1597, the regiment had its quarters in Aix and Tarascon but was recalled to the army for the siege of Amiens. In 1598, it accompanied King Henry IV at Nantes.

From 1598 to 1610, the regiment was probably stationed in the region of Nantes and on the Loire.

In 1610, during the War of the Jülich Succession (1609-1614), five companies of the regiment were part of the expedition who entered into the Duchy of Zweibrücken, passed the Moselle and occupied Jülich.

In 1615, the regiment, who was still stationed on the Loire, was recalled to cover Paris and the Province of Champagne against Condé. On 21 October, part of the regiment fought at the combat of Chamlay. The regiment then returned to the Loire where it took part in the capture of the Castle of Isle-Bouchard. In 1616, it campaigned in Poitou and Guyenne before marching to Picardie in November. In 1617, eight companies took part in the siege of Soissons.

After the Treaty of the Pyrenees, the regiment was stationed in Lorraine.

The fact that Navarre Infanterie, Champagne Infanterie and Piémont Infanterie were all created during the same year gave rise to endless argumentations about their respective ranking. In February 1666, Louis XIV had to edict a regulation stating that each regiment would alternate for the 2nd, 3rd and 4th ranks on a yearly basis.

During the War of Devolution (1667–68), in 1667, initially stationed at Metz, took part in the campaign in Luxembourg and then took its winter-quarters in Charleroi. In 1668, it took part in the attack on Geneppe.

At the beginning of the Franco-Dutch War (1672–78), in 1672, the regiment took part in the sieges of Orsoy and Rheinberg, in the passage of the Rhine, in the captures of Arnhem, Doësbourg and Zütphen; in the siege of Woërden and in the expedition against Zeeland, the sack of Bodegrave and Swammerdam. In 1673, it took part in the siege of Maastricht; in 1674, in the defence of Maastricht; in 1675, in the sieges of Huy and Limbourg, and in the defence of Maastricht where it remained till the end of the war. In 1676, a newly formed battalion was sent to Sicily where it remained till 1678.

In 1684, two battalions of the regiment were at the siege of Luxembourg.

At the outbreak of the Nine Years' War (1688–97), in 1688, the first battalion of the regiment took part in the sieges of Philippsburg and Mannheim while the second was part of the force who submitted Kayserlautern, Kreuznach, Neustadt, Oppenheim, Worms, Spires Mainz, Bingen and Oberkirch; bombarded Koblenz and put Palatinate to contribution. In 1689, the first battalion campaigned on the Rhine. In 1692, the regiment took part in the siege of Namur; in 1693, in the battle of Landen where it suffered heavy losses, in the siege of Charleroi; in 1695, in the occupation of Namur and in the bombardment of Bruxelles; in 1696, in the defence of the Castle of Hart near Neustadt.

In 1714, the regiment incorporated the disbanded Nuaillé Infanterie.

In 1719, at the outbreak of the War of the Quadruple Alliance, the regiment marched from Bretagne to Spain but hostilities had ended before its arrival and it returned to its garrisons in Bretagne.

Piémont Infanterie was among the six French regiments known as Vieux Corps.

On the eve of the Seven Years' War, the regiment counted four battalions and had prévôté (provostship). The regulation of February 1, 1760 doubled its strength, each battalion now had 9 companies: one company of 45 grenadiers and eight companies of 85 fusiliers.

In 1756, the regiment was sent to Normandie where it was initially stationed at the camp of Cherbourg before being cantoned at Saint-Lô and Vire. It was then ordered to march to Landau.

In 1757, the regiment was considered as one of the best of the French Army. On July 20, the regiment set off from Landau. On July 28, it passed the Rhine at Mainz. On August 1, it arrived at Hanau which opened its gates. Somewhere between August 23 and September 6, it joined the Army of Saxony, led by the Prince de Soubise, in the area of Erfurt and Eisenach. By August 30, it was cantoned in several villages along the Saal. It then received orders to march to the relief of Weissenfels, threatened by the Prussians. Captain de Tasque was left behind to guard the baggage. There was a boat on the other side of the river which could be used by the enemy to attack Tasque’s detachment. A soldier, Claude Bélier, known as Bellerose, swam across the river under a hail of musket balls and brought back the boat. During this campaign, the regiment did not stand up to its reputation: it was badly equipped and its standard drill did not even compare to the worst German militia. On September 27, it was in the first line of the left wing of the Franco-Imperial Army. On November 5, under M. de Crillon, it took part in the disastrous Battle of Rossbach where it was placed in the first line of the centre. The first battalion was forming a column with a frontage of 12 men. The other battalions were deployed in column by platoons. The Prussian artillery opened with canister fire on the heads of these columns. The grenadier company, forming the head of a column was annihilated by the first artillery salvoes. The regiment then marched to the enemy and suffered heavy losses before routing. In this battle the regiment lost more than 1,000 men (including 22 officers killed and 64 wounded). At the end of the year, it took its winter-quarters in Cologne, in the fourth line of the French army.

At the end of January 1758, the regiment was assigned to the army that Louis XV planned to send to Bohemia for joint operations with the Austrian Army. However, when the Allies launched their surprise winter offensive in Western Germany, the regiment retreated towards Düsseldorf and Deutz with the bulk of Broglie's Army. It passed the Rhine on April 3 and 4. By July, it had joined Soubise's Army assembling near Friedberg in Hesse. On October 10, it was present at the Battle of Lutterberg where it was placed in the centre of the first line. It took up its winter-quarters in Hanau and detached 100 men to guard the Castle of Marburg.

On April 13 1759, the regiment took part in the Battle of Bergen where it formed part of the first line of the right wing under the command of Prince Camille de Lorraine. The regiment was among the infantry deployed in support behind the village of Bergen. Two battalions timely came to the rescue of the French infantry occupying Bergen, driving the Allies back. In this battle, the regiment lost Captains de Bony, de Brassant, Lecomte, Chevalier de La Perrère and Balan, and Lieutenants de Rédon, de Malleville, Pernon, Colombier, Maury, Govin, Prévost de Millery and Malherbe, killed; and 25 officers wounded. The regiment then went to Strasbourg to recruit. After six weeks, it rejoined the army. In June, at the beginning of the French offensive in Western Germany, the regiment was part of the “Right Reserve” under the command of the Duc de Broglie who had taken position at Friedberg in Hesse. On August 1, the regiment took part in the Battle of Minden where it was deployed in the first line of Broglie's Corps. In this battle, it lost 180 men killed or wounded, including Lieutenant Dallat, killed; and Captains Desaulnayes,Belhude, Méric, Caty, Fredfont, Biarge, Malleret and 8 lieutenants, wounded. At the end of the year, a murder involving several officers of the regiment had grave consequences: in a war council, 3 officers, who had escaped, were sentenced to death; 5 officers were dismissed from service and sentenced to 5 years in fortress; all other officers present were dismissed and imprisoned for a year.

By January 3, 1760, the regiment had taken position at Weilmünster. On January 28, a royal decree confirmed the sentences of the war council. The regiment was sent to Metz and then to Ostend where it remained until March 1761.

In March 1761, the regiment set off from Ostend to rejoin Soubise’s Army on the Lower Rhine. At the camp of Wesel, it was deployed on the right wing. On July 16, the regiment took part in the Battle of Vellinghausen where it was deployed on the right of the first line of the infantry centre. It later took part in the attack of Wolbeck and in the siege of Meppen. It took up its winter-quarters at Kleve and Goch.

In the spring of 1763, the regiment returned to France by Givet and was sent to Saint-Omer where it arrived in May. 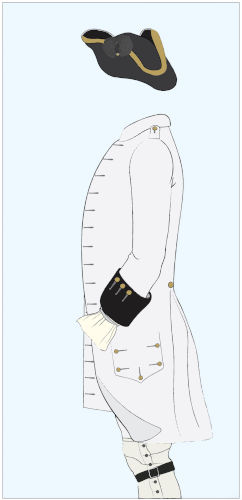 Colonel Colour (as per the État Militaire of 1740 and La Chesnaye in 1759): white field with a white cross.