The need for pioneers came from the infantry whose marching columns constantly had to have obstacles moved out of their ways, roads repaired, walkways and bridges thrown over rivers.

At the end of 1757 GFWM Count Franz Moritz Lacy persuaded Maria Theresa of the usefulness of a Pionier-Korps.

The Pionier-Korps was established in January 1758 and consisted of one battalion of four companies. Each company consisted of 161 officers and men, including jägers to protect the pioneers. More precisely:

Jägers were recruited among professional hunters and gamekeepers; pioneers among miners, fishermen and boaters. The battalion was attached to the General Staff. And was placed under the supervision of the quartermaster-general, GFWM Lacy.

The corps was equipped with a light bridge train consisting of 3 groups of six-horse wagons. Each company carried a stock of 3 m. long wooden poles and 10 m. long beams.

In 1759, each company of the Pionier-Korps was increased to 266 officers and men and was allocated to various armies and corps. Each company then comprised:

During the Seven Years' War, the successive commanders of this corps were:

In the winter of 1761-62, for cost reasons, the corps was disbanded at the instigation of Chancellor Kaunitz against the will of the generals. However, 200 pioneers were incorporated into the Stabs-Infanterie while the pontoon-wagons were transferred to the Pontoniers.

An independent Pionier-Regiment was re-established in 1867.

On October 14 1758, the Pionier-Korps proved its value at the Battle of Hochkirch.

In the Summer of 1760, the Pionier-Korps was present at the Battle of Landeshut (June 23) and at the storming of Glatz (July 26).

In September 1761, the Pionier-Korps took part in the blockade and storming of Schweidnitz. 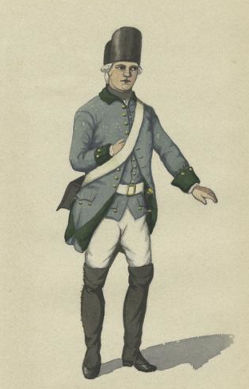 Pioneer in 1760 - Courtesy of The New York Public Library

NCOs wore the same uniform as the pioneers with the following distinctions:

Officers wore the same uniform as the pioneers with the following exceptions: