At the end of August 1756, when Frederick II proceeded to the invasion of Saxony, the regiment retired to Pirna with the rest of the Saxon army. At Pirna, the regiment was deployed on the left wing under the Fürst von Anhalt, as part of von Ronnow's Brigade. The Prussians blockaded the Saxon army in Pirna from September 9 until October 15 when the Saxons finally had to surrender. The regiment was disbanded and its troops distributed among Prussian cuirassier regiments. 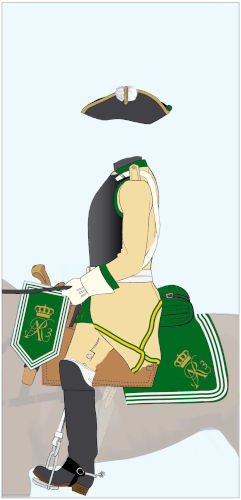 Trooper of the Plötz Cuirassiers in 1756 - Copyright: Franco Saudelli and Dr Marco Pagan

Leibstandarte: white damask field heavily embroidered in gold with silver piping, centre device consisting of a gold shield of ornate design carrying the Royal Polish arms (white eagles and white knights on a red field) and on the centre the arms of Saxony beneath the electoral hat, surmounted by a crimson royal crown and surrounded by green palm leaves. Fringe in gold (buttons color) and green (distinctive color = Russian green).