The regiment was created on June 15, 1727 from 5 squadrons of the Dragoner Regiment Nr. 6. It garrisoned Tilsit which would remain its garrison place throughout its existence. It recruited in the districts of Tilsit, Memel and Insterburg.

In 1744, the regiment contributed 5 squadrons for the creation of Dragoner Regiment Nr. 8. Thus, it was itself reduced to 5 squadrons.

In 1757, the regiment was part of Lehwaldt's Army assigned to the defence of East Prussia against a Russian invasion. On August 30, at the Battle of Gross-Jägersdorf, it was deployed in the first line of the cavalry left wing under Lieutenant-General Schorlemmer. During this battle, the regiment lost 136 men but captured a battery of 10 guns.

On August 2 1758, during the Russian invasion of Brandenburg, Manteuffel reinforced the Prussian detachment at Reppen with this regiment along with Schorlemmer Dragoons (5 sqns). On August 21, the regiment joined King Frederick II at Cüstrin. On August 25, the regiment fought in the Battle of Zorndorf where it formed part of the reserve behind the left wing. It belonged to the brigade of dragoons who, around 11:50 a.m., delivered a deadly counter attack and threw Gaugreben’s Brigade back into the ranks of the Russian infantry causing disorder and confusion. Frederick then sent the regiment to reinforce his right wing but changed his mind and recalled it to the left to support the attack of the Prussian cavalry. During this battle, the regiment captured 5 guns and lost 63 men. On September 15 in the evening, Dohna received orders from Frederick instructing him to send the regiment to Berlin where it would join Wedel who was advancing against the Swedes. On September 16, the regiment departed for Berlin. On September 26, it attacked a Swedish foraging party in the Combat of Tarmow where it charged Västmanlands Infantry six times but did not succeed to break them, loosing 2 officers and 120 men in this action. The Swedish regiment retreated in good order. On September 28, the regiment took part in the unsuccessful assault on Fehrbellin.

In mid-September 1761, during the Siege of Colberg, the regiment was attached to Werner’s small detachment who raided the Russian magazines. On October 21, Platen sent the regiment to the assistance of the small force of Lieutenant-General Courbière involved in the engagement of Zarnglaff against the Russians. However, reinforcements arrived too late to prevent Courbière’s surrender. On October 22, the regiment took part in the Combat of Gollnow. In mid-December, it formed part of the force under the Prince of Württemberg who vainly tried to relieve Colberg. On December 12, it fought in the Combat of Spie. At the end of December, after a very tough campaign, the various Prussian corps operating in Eastern Pomerania took up their winter quarters. The regiment, belonging to the corps of Prince Eugen von Württemberg, took up its winter-quarters in Mecklenburg.

On May 12, 1762, the regiment took part in the Combat of Doebeln where it was attached to the right column under Seydlitz. At the end of July 1762, the regiment formed part of Seydlitz’s Corps who launched a raid into Bohemia. On August 2, it fought in the Combat of Teplitz. Finally, on October 29, it participated in the Battle of Freiberg where it formed part of the vanguard. 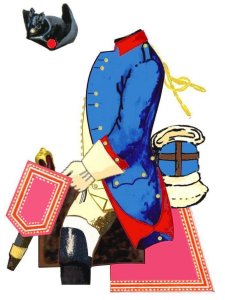 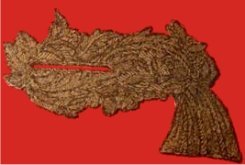 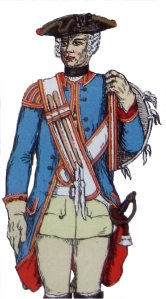 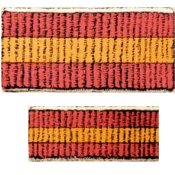 Drummers of the regiments of dragoons probably wore the same uniform as the troopers but decorated on the edges and seams with a red lace decorated with a yellow central band.

Standards were made of damask. They were swallow-tailed and measured some 50 cm along the pole, 65 cm from the pole to the extremity of a point and 50 cm from the pole to the centre of the indentation. The cords and knots were of silver threads. Exceptionally, the pole of the standard was a blue tournament lance (sources disagree about the exact shade, it being either pale blue or cornflower blue) reinforced with iron hinges. The golden spearhead wore the crowned monogram of Frédéric Wilhelm (FWR).

Originally this regiment used standards dating from Frederick Wilhelm I: a Leibstandarte and four Regimentsstandarte of the "FWR pattern". In 1740, when it was increased to 10 squadrons, the new squadrons required flags. These were issued in 1742/43 and were all of the "FR pattern", so the regiment carried equal numbers of "FWR pattern" and "FR pattern" flags.

When the regiment was split to form the new Dragoon Regiment No. 8 in 1744, the 1st, 3rd, 5th, 7th and 9th squadrons remained with the present regiment while the 2nd, 4th, th, 8th and 10th squadrons formed the new Dragoon Regiment No. 8. The 2nd squadron became the Leib or 1st squadron of the new regiment and was issued a new Leibstandarte in 1744 or 1745. Thus both regiments had a mixed set of flags, the present regiment having three of the "FWR" pattern flags (for the Leib, 2nd and 3rd squadrons) and two "FR" patterns (for the 4th and 5th squadrons). The regiment lost a couple of flags during the wars. All were Regimentsstandarten, but which squadrons lost flags (an unlucky squadron may have lost two flags) is not specified in our sources. However the present regiment still had "mixed sets" in 1806, which suggests that it retained at least one "FWR" pattern flag, as well as his "FWR" pattern Leibstandarte.