This regiment considered itself as a corps originating from a unit raised in 1585. It joined the regular French army on September 16 1616. It was initially a gentleman's regiment. On August 31 1682, it took the name of the province of Poitou.

The regiment counted two battalions. When the French army was reorganized in December 1762, the regiment was increased to four battalions by incorporating the disbanded Saint-Mauris Regiment.

During the War of the Polish Succession, the regiment initially served on the Rhine.

During the War of the Austrian Succession, the regiment first served on the Rhine from 1741 to 1743. In 1744, it was transferred to the Armée des Alpes. The following year, it took part to the battle of Tanaro. In 1746, it was at Plaisance, and in 1747 at Nice.

In January 1757, the regiment was garrisoning Béthune. In March 1757, it left for Bruxelles then joined the army of Prince de Soubise in Stockheim. On April 3 1757, the regiment was assigned to the Corps of six battalions blockading the Duchy of Gueldre, it occupied Kevelau and Retten. It took part to the capture of Wesel and Juliers. From April 27 to June 17, the regiment was part of the Reserve under the Prince de Soubise. On July 26, the regiment was at the battle of Hastenbeck where it supported the leading columns of the left wing. On August 16, the regiment was among the force sent by the Duc de Richelieu to occupy the Duchy of Brunswick who had submitted to the French domination. It was detached to Wolfenbüttel under M. de Voyer. It was then transferred to the Army of Saxony under Soubise. On November 5 1757, the regiment took part to the battle of Rossbach where it was brigaded with Provence Infanterie in the Reserve under Broglie. During this battle, it suffered heavy losses, including its colonel. At the end of the year, it took its winter quarters at Lippstadt, in the fourth line of the French Army.

In 1758, the regiment was sent back to France where it was assigned to the protection of the coasts.

In 1761, the regiment was sent to Germany to reinforce the Prince de Soubise's army. On July 16, it took part to the battle of Vellinghausen.

In June 1762, the regiment participated to the engagement of Grebenstein. On September 20, it took part to the capture of the Castle of Amöneberg.

At the end of the war, the regiment was stationed in Nîmes. 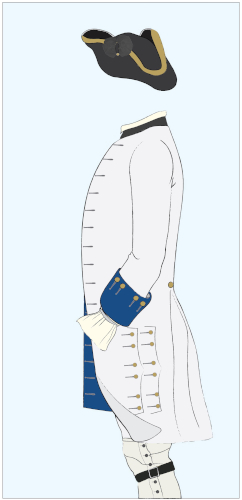