The colours carried by the Portuguese Line Infantry during the Seven Years War are not very well known. In fact, there are no surviving descriptions of these colours, the Arquivo da Tanéncia having been almost completely destroyed during the earthquake of 1755, and the Arquivo da Trés Estados destroyed by a fire in the 1820s. One can only make assumptions based on earlier colours or colours carried by the Portuguese Infantry shortly after the war.

Usually, infantry and cavalry regiments used colours carrying the arms or cipher of their commander on a background chosen by this commander.

An old black and white illustration published in a book entitled Milicia Pratica shows two identical colours where each canton is subdivided into a dark and a light triangle (most probably green and white) and bordered by bands of contrasting colours. These colours did not carry any arms or cipher.

A coloured illustration depicting the execution of the Tavora family in 1759 depicts 6 colours. All are of the same pattern: green field with 8 narrow wedges with a thin central green stripe surrounded by a monochrome border; wedges and borders are white on 5 colours and gold on 1.

Inventories of war materials made from 1763 onwards in different forts listed various colour patterns under the term bandeiras de guerra. These inventories ofter referred to green and white colours, which most likely would be the old green-white striped colours which were already in use during the War of the Spanish Succession (1701-1715) and still in use in some regiment in 1771. The inventory of Fort Estremoz in 1763 mentions 12 green and white colours. The same year, an inventory at Elvas lists 15 colours of white and green taffeta.

Other patterns were also in use. For example, an inventory of the general stores of the province of Minho (in Viana), made in 1771, mentions 14 regimental colours: 3 of red taffeta, 8 with blue and red stripes on a white background, 3 with green stripes on a white background, two black roan linen standards carrying the royal arms in the centre, 2 standards carrying the royal arms (without specifying the colour of the background).

Since we have only very concise textual descriptions and 2 contemporary examples of colour patterns, the colours illustrated here are mostly based on colours existing prior or shortly after the Seven Years War and must be considered as “tentative reconstructions” of the Portuguese colours in use during the campaign of 1762. 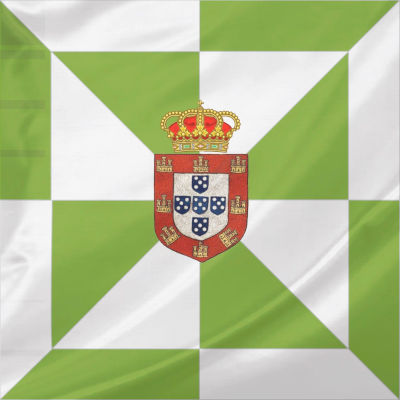 Example of a standard design colour, green and white are assumed because they were the colours of the House of Braganza and the national colour of Portugal as they appeared until 1834. This example also shows the arms of Portugal - Source: PMPdeL

An ordinance specified that each infantry regiment should carry only two colours. However, this regulation was not always followed, some commanders completely ignoring it. For instance, general Jaime dos Santos Agnelo Couvreur reported that, after the ediction of a “new ordinance" during the reorganization of the count of Lippe-Bückeburg in 1763, some infantry regiments carried 2 colours, others 4 or even 10!

Other examples show that the number of colours carried by each regiment varied greatly: in 1756, when the regiment garrisoning Setúbal surrendered, it sent 2 colours; in 1760 Peniche Infantry had 4 colours.