The regiment was initially raised in 1675 by Colonel von Ilten. It was disbanded in 1697.

In 1679, when Denmark established a blockade around the city of Hamburg, the regiment formed part of the Hanoverian and Celler troops sent to the Elbe who forced the Danes to retire.

In 1711, the regiment occupied Hildesheim.

In 1763, the regiment Monroy Infantry (No. 10B) was amalgamated to this regiment.

On July 26 1757, during the French invasion of Hanover, the regiment took part in the Battle of Hastenbeck where it was deployed in the first line of the right wing under the command of General Block. At the end of the year, during the Allied counter-offensive in Hanover, the regiment was allocated to Diepenbroick’s Corps who drove the French out of the region of Bremen.

On May 26 1758, the regiment was with the corps of the Prince von Anhalt in the camp of Coesfeld. On May 31, this corps accompanied Ferdinand of Brunswick in his offensive on the west bank of the Rhine. On June 23, the regiment took part in the Battle of Krefeld where it was deployed on the right wing under the command of the Erbprinz (Hereditary Prince) of Brunswick. At 1:00 PM, the regiment followed the Hereditary Prince in his attack against the wood held by Saint-Germain Division. Towards the end of the battle, the Hereditary Prince and Gilsa rallied the battalion along with other Allied infantry units and advanced onto the plain. The Comte de Gisors at the head of 4 squadrons of Carabiniers charged these advancing battalions who let them close in to about 20 paces before firing a devastating volley mowing down in an instant most of the first rank. A single squadron managed to break through but the third rank of infantry knocked it down. On October 10, the regiment fought in the Battle of Lutterberg where it formed part of Major-general Post's Brigade deployed in the first line of the centre. It covered the retreat and then took post at Einbeck.

At the end of March 1759, during the 1759 - Allied spring offensive in Western Germany, the regiment took part in the attack on Meiningen The regiment formed part of the Allied army of Ferdinand of Brunswick. It was attached to Post Brigade in the first line of the infantry centre. On April 13, the regiment took part in the Battle of Bergen where it formed part of the second column under the Prince von Ysenburg, posted on the left wing of the Allied army. The Prince von Ysenburg, who had been a rallying point for Hessian resistance against the French, fell leading the repeated assaults up a steep slope against the abattis situated around the village. The French units in Bergen were strengthened by a reserve who blunted all attacks. After repeated attempts to storm the village of Bergen, the Hanoverian and Hessian troops finally withdrew. In June, the regiment was part of Imhoff's Corps operating in Hesse. It took part in the siege of Münster. However, on September 6, facing a much larger army advancing towards Münster under the command of d’Armentières, Imhoff raised the siege and retired by Telgte. On September 12, after reinforcing the garrison, d’Armentières retired to Wesel and Imhoff resumed siege operations and Münster surrendered on November 20.

In February 1760, the regiment took up its winter-quarters in Bentheim. In June, it was allocated to Sprörcken's Corps posted at Volkmissen. During the night of July 24 to 25, this corps was harassed by a French Corps under the Comte de Broglie. Spörcken's corps spent the night under arms near a narrow defile between Fischbach (unidentified location) and Wolfhagen, then Spörcken sent his cavalry in a wide turning movement of about 20 km around a hill. His infantry then passed the defile but before the Allied cavalry could join it, the rearguard (Post Infantry (1 bn), Estorff Infantry (1 bn) and 400 picquets) was attacked by French horse and foot. The Allied rearguard managed to gain a rising ground where it held for 2.5 hours till the arrival of Spörcken's cavalry (7 Hanoverian sqns and 2 Hessian sqns under Breitenbach). This cavalry attacked the French in flank and put them into disorder. During this action, the French lost about 1,000 men, the Comte de Vair was killed and the Comte de Belzunce and M. de Comeyras wounded. The Allies lost 200 men. On July 31, the regiment took part in the Battle of Warburg where it was deployed in the first line of the right wing, in front of Ossendorf, under the command of Lieutenant-General Hardenberg.

In mid-February 1761, during the Allied campaign in Hesse, the regiment was part of Oheimb’s Corps who ambushed Maupéou's Corps between Sachsenberg and Neukirchen, instantly putting it to flight and capturing M. de Maupéou along with a lieutenant-colonel, 5 officers and 50 soldiers. The regiment then took part in the siege of Kassel which was raised on February 29. On July 16, the regiment was present at the Battle of Vellinghausen where it formed part of Wolff's Corps detached by Spörcken from Herzfeld to reinforce Wutginau. Its colonel, de Sance, was killed during this battle.

In 1763, the regiment returned to Hanover. 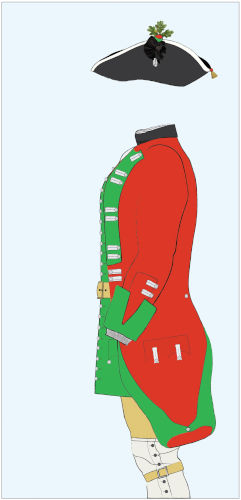 The drum pattern had hoops in alternating poison green and red diagonal stripes, white drum cords over a brass drum with the Arms of Hanover in the centre.

Regimental Colours: dark green field; centre device consisting of an outstretched mailed arm with sword, the whole surrounded by a laurel wreath and a trophy of arms; a white scroll above carrying the motto CUI VULT. Hereafter, we present an illustration from the Reitzenstein Sammlung, dating from circa 1761 (left) and the interpretation of Hannoverdidi (right).