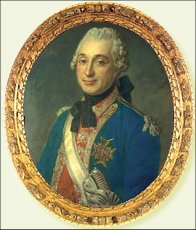 Detail of a painting of Poyanne - Source: Collection of Jean-Louis Vial

During the War of the Polish Succession, on March 25 1734, Poyanne was promoted captain in Royal-Étranger Cavalerie. In June and July, he was present at the siege of Philippsburg. On March 11 1735, he became third guidon of the Gendarmes de la Garde, with the rank of mestre-de-camp de cavalerie. That year, he campaigned on the Rhine. On November 11, he obtained the government of Dax and Saint-Sever, with the charge of Sénéchal of the Landes when his uncle, the Comte de Gassion resigned this charge. On October 28 1739, Poyanne became second guidon of the Gendarmes de la Garde.

Shortly after the outbreak of the War of the Austrian Succession, on August 29 1741, Poyanne was promoted mestre-de-camp lieutenant of Bretagne Cavalerie (later known as Bourgogne Cavalerie). He resigned his charge of guidon of the Gendarmes de la Garde and rejoined his regiment in the Army of Westphalia, wintering in the Duchy of Berg. In August 1742, when this army left Westphalia to reach the frontiers of Bohemia, Poyanne marched with the third division of the army. He contributed to drive the enemy out of Bavaria and, in December, was at the relief of the siege of Braunau. In 1743, Poyanne distinguished himself at the capture of Schmidmill in February and at the supplying of Egra in April. Then, in July, he returned to France with the army. In August, he was in Upper Alsace, under the command of the Maréchal de Coigny, and was instrumental in defeating 3,000 men who had passed the Rhine at Rhinvillers. In 1744, Poyanne served with the Army of the Rhine and contributed to the recapture of Weissembourg and of the lines of the Lautern. On August 13, he assumed the rank of brigadier (his qualifications had been issued on May 2). That year, Poyanne took part in the affair of Haguenau and in the siege of Fribourg. On November 1, he was assigned to the Army of the Lower Rhine where he served the following winter, under the command of the Maréchal de Maillebois. In March 1745, Poyanne was at the capture of Cronembourg. On July 19, he distinguished himself at the passage of the Rhine where he was taken prisoner while serving in the rearguard. From May 1 1746, he served in the army commanded by the Prince de Conti. He first campaigned on the Meuse, then between the Sambre and the Meuse, during the sieges of Mons and Saint-Guilain. He then was at the siege of Charleroy, where he covered the King's Army, and at the siege of Namur. On October 11, he took part in the Battle of Rocoux. From May 1 1747, he served with the King's Army. On July 2, he took part in the Battle of Lauffeld and finished the campaign under the command of the Comte de Clermont. On January 1 1748, Poyanne was promoted maréchal-de-camp and resigned his command in Bretagne Cavalerie. From May 1 to June 24, he served with the Army of the Low Countries.

On September 27 1754, Poyanne was commissioned Inspecteur-Général de la Cavalerie et des Dragons. A letter dated July 31 1755, assigned him as maréchal-de-camp at the camp of Richemont, under the command of M. de Chevert.

A letter dated March 1 1757, assigned Poyanne to the Army of Germany for the planned invasion of Hanover. By April 25, he was at Düsseldorlf. On July 26, he fought in the Battle of Hastenbeck. He then took part in the conquest of Hanover, marching on Zell at the head of the Carabiniers of the army. A letter dated November 29 placed him under the command of the Maréchal Duc de Richelieu for the winter.

On January 27 1758, Poyanne was placed under the command of the Comte de Clermont while continuing to serve in the same army. On May 1, Poyanne was promoted lieutenant-général. On June 23, he distinguished himself at the Battle of Krefeld and, after the death of the Comte de Gisors, obtained the charge of mestre-de-camp. On July 7, Poyanne was named lieutenant and inspector of the Carabiniers de M. le comte de Provence. In October, he was detached with 2,000 men towards Drentwort. On his way, he learned that the entire Allied jäger corps was at Herberen, he immediately took dispositions to attack them. He first drove back 100 grenadiers and 100 jägers entrenched in a farm where they defended themselves stubbornly. He then drove the Allies out of Herberen after a combat of 90 minutes where he killed 200 men, took 5 officers and 80 grenadiers prisoners, and routed the Allied cavalry. On October 25, Poyanne made a junction with the Marquis d'Armentières in front of the army and, by his manoeuvres, forced General Kilmansegg to retire into Münster.

A letter dated May 1 1759, assigned Poyanne once more to the Army of Germany where he would serve under the command of the Marquis de Contades. Poyanne was placed at the head of an elite corps consisting of the Gendarmerie de France and the Carabiniers de M. le comte de Provence. On August 1, he fought in the Battle of Minden where he was wounded by a musket ball and several sabre cuts. Poyanne was wounded once more by a bayonet thrust and a musket ball during an action at Todenhausen. On October 17, during a general forage, he repulsed a large Allied detachment.

From May 1 1760, Poyanne was attached to the Army of the Lower Rhine, under the command of the Maréchal Duc de Broglie. He was placed at the head of a large corps. On June 8, he made himself master of the post of Halsdorf. A few days later, he occupied Frankenberg/Eder. On July 10, Poyanne was at the Combat of Korbach. Later during the campaign, he took part in a general forage under the command of the Prince de Condé.

From March 8 1761, Poyanne was attached to the Army of the Upper Rhine. The same month, he took part in the French counter-offensive in Hessen who drove the Allies out of this principality. On March 26 at daybreak, a few Allied troops were guarding a bridge over the Schwalm at Dittershausen. When the Hereditary Prince of Brunswick started to evacuate his outposts, M. de Poyanne sent against them about 100 men of Royal-Nassau Hussards, led by M. Schwartz and supported by dragoons and the Volontaires de Saint-Victor. This force broke the Allied hussars and reached the infantry, capturing 4 guns, a British aide-de-camp of the Hereditary Prince, Lieutenant-Colonel Jeanneret of the Malachowski Hussars, along with 60 men. On October 10, at the head of a large corps, Poyanne took dispositions to attack General Luckner but the latter retired on Hameln from where he went to Hildesheim. When the French army retired to its winter-quarters, Poyanne commanded the rearguard, protecting the main body from Allied incursions. He wintered with the army and was employed as inspector-general in the amalgamation of cavalry regiments prescribed by the Royal Decree of December 1.

In 1762, after reorganising the French cavalry, Poyanne went to Gotha where he commanded till the opening of the campaign. He was then commander-in-chief of the Carabiniers de M. le comte de Provence.

After the war, on June 7 1767, Poyanne was made chevalier of the Ordre du Saint-Esprit.

To this very academic and "politically correct" presentation of Poyanne's biography, extracted from the Dictionnaire historique et biographique des Généraux Français written by the Chevalier de Courcelles, let us add two other less flattering texts. First of all, an excerpt of the memoirs of the Marquis d'Argenson, who in 1756 wrote:

"The party of the marquess is composed of M. de Soubise, who, though a honest man, has been embarked on it by the interests of his ambition, the garde des sceaux Machault, the Abbey de Bernis, M. de Poyanne, a mediocre man, as insolent as a lackey, etc., here are the main. The king, by habit, let himself govern by this party, and, if he finds some counter-weighs in his ministers, follow in this the worst parties, deferring to two opposite cabals who successively carry the day."

In another small work entitled Galerie des Aristocrates et Mémoires Secrets published in London and Paris in 1790, one can read on the flyleaf:

"counselled by fools, served by poltroons, Louis XV has received the most bloody affronts"

And the books mentions about the Marquis de Poyanne that:

"The Marquis de Poyanne, lieutenant-general, commanding the Carabiniers, is a braggart of the same kind as the Marquis de Lugeac. He has leased the maintenance expense of the corps under his command, and has made himself a rent of 60,000 livres to the expense of those who they belong; a shameful way for a man of war! Where are you du Guesclin, Bayard, Coligny? What would you say, seeing in this century all becoming the price of money, even honour, even shame! He sacrifices in a soldier all other qualities to his features, and he has lost the good spirit of this respectable troop whom he has filled with undisciplined bandits. Nobody is more conceited, more foolhardy and more peremptory than this general. He will cause the most fateful harms in all armies where he will be employed". (Mort)

This article is a translation of Jean-Louis Vial's article published in his website Nec Pluribus Impar.