The Preobrazhénskiy Leib-Guard was initially raised from the children regiments, the potiéchnyi used by Peter I during his childhood to play the little war.

In 1700, the regiment was one of the few uniformally dressed unit of the Russian army.

In 1742, Elizabeth Petrovna created the Leibkompanie from the grenadiers of the regiment in recognition of the help that this unit had given her when she had walked upon the Palais d'hiver.

At the beginning of the Seven Years War, the regiment counted some 4,500 men (3,720 men including 432 non-combatants according to the work of the Grosser Generalstab) and consisted of:

During the entire Seven Years War, the regiment was stationed in Sankt. Petersburg.

In 1762, the regiment took part to the coup which overthrew Peter III and replaced him by Catherine II. 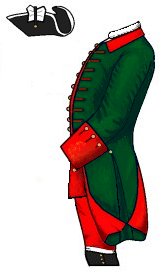 Leibkompanie’s officers carried shoulder-belt cartridge-boxes covered in red velvet, with EP and weapons and grenades trophies embroidered on the lapel, bandoleer were made in gilt mail. Similarly the lyadunka was in red velvet, lined by a golden edge, trophies and grenades. Officers of other companies had a red leather cover to protect and decorate the patronna sumka. 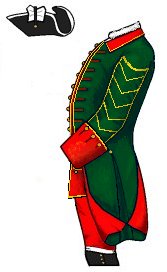 Preobrazenskiy Guard Fifer Uniform in 1757 - Source: rf-figuren from a Not By Appointment template 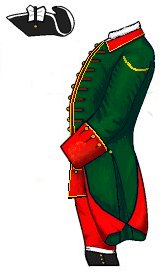 Preobrazenskiy Guard Drummer Uniform in 1757 - Source: rf-figuren from a Not By Appointment template

Drummers wore the same uniform as the troopers with swallow nests on shoulders and braids on cuffs, pockets and collar. Fifers wore the same uniform as the troopers with braids on cuffs, pockets and collar (no swallow nests on the shoulders). The Drum Major had a gold edge on his tricorne, and gold braids on cuffs and collar. Drums were made in copper, the regimental coat of arms engraved in the front, bordered in red and green, green and white cords. Important notice: Even though our illustrations depict yellow laces, the colour of the braids on the uniforms of the musicians were chosen by the colonel. For instance, it could have been the distinctive colour of the regiment (shown on the ordonnance flag). They were often decorated with red “XXXX” in the middle.

The flags measured 1,62 m. x 2,66 m., with a gold finial and silver cords and tassels. The flags were fringed in gold and mounted on a 3,35 m. white wooden pole. The three Guard regiments had flags of similar design. However, the distinctive colour of each regiment (red in the case of Preobrazenskiy) was used on the outer border and the part wrapped around the flagpole. Moreover, the Colonel flag seems to have more gilding than the Ordonnance flag.