In 1751, the regiment became the property of Count Palatine Friedrich Michael von Zweibrücken.

By the time of the Seven Years' War, the regiment counted 3 squadrons, each consisting of 3 companies for a total of 478 men in 9 companies.

The successive chefs of the regiment were:

During the Seven Years' War, its commander was:

At the outbreak of the war in 1756, the regiment was garrisoning Heidelberg and Mosbach.

In 1757, the II and III squadrons (each counting 144 men) of the regiment where combined with the Oberrheinische Kreiseskadron (Imperial District Squadron of the Upper Rhine) to form the so called Kurpfalz Cuirassiers (aka von Hatzfeld Carabiniers). This regiment joined the Reichsarmee operating in Thuringia. In August, this army combined with a French contingent under the prince de Soubise to form the Franco-Imperial army, which proceeded to the invasion of Saxony. Soubise rated the various units of the Reichsarmee and considered the von Hatzfeld Carabiniers as "mediocre". On November 5, the regiment fought at the Battle of Rossbach where it deployed in the first line of the right wing under the Prinz von Hohenzollern. The regiment suffered heavy losses during this battle.

On November 20 1759, as part of the Kurpfalz Cuirassier Regiment, the II and III squadrons took part in the Battle of Maxen where an Austro-Imperial army captured the Prussian corps of Lieutenant-general Finck.

On October 29 1762, as part of the Kurpfalz Cuirassier Regiment, the II and III squadrons took part in the Battle of Freiberg.

Throughout the war, the I./Prinz Friedrich squadron remained at Heidelberg in Palatine territories. 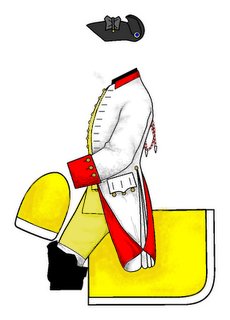 Uniform in 1777 - Source: rf-figuren from a Not By Appointment template

Troopers were armed with a straight bladed sabre (brass hilt), a carbine and 2 pistols.

The situation concerning the standards of the regiment was complex and we had to retrace its successive owners to match the standards correctly.

The Bavarian Army Museum (BAM) at Ingolstadt has the original Leibstandarte of Prinz Max Cavalry, issued in 1777. The standard is shown in reverse only, the obverse is probably the same as the Leibguidon of the Kurfürstin Leib-Dragoner.

Leib Standard (Leibstandarte): white field, heavily embroidered with silver foliage and fringed in silver. In the corners the "CT" monogram, surrounded by palm branches and surmounted by an elector's hat. In 1755 before the Seven Years' War, the monogram would already have been "CT". 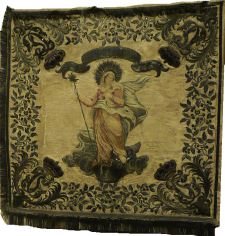 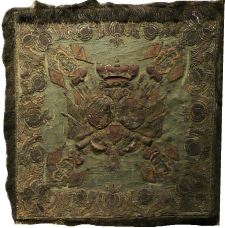 Each squadron carried a standard.

Volker Scholz for the information and illustrations of the standards.