In 1756, the regiment became prisoner at Pirna and turned over into Prussian service becoming the regiment of Major-general von Saldern.

In 1757, the regiment reformed in Hungary with a single bataillon and fought with the French armies till 1763. After the Treaty of Hubertusburg it was reorganised in 3 battalions in 14 coys.

The État of 1756 mentions 2 battalions with 10 coys of musketeers and 2 coys of grenadiers. Each musketeer coy had 95 men, grenadier coy 97 men, while the regimental staff counted 17 men. The regiment totalled some 1,160 men.

In 1757, the regiment reformed in a single battalion of 4 coys plus 1 coy of former gunners serving as grenadiers. This coy was disbanded in 1758 when a Saxon artillery detachment was raised. Thereafter, the regiment had no grenadier until 1761, when 1 coy of grenadiers was craated in each Saxon battalion.

At the end of August 1756, when Frederick II proceeded to the invasion of Saxony, the regiment retired to Pirna with the rest of the Saxon army. At Pirna, the regiment was deployed on the left wing under von Harthausen, as part of von Risckwitz's brigade. The Prussians blockaded the Saxon army in Pirna from September 9 until October 15 when the Saxons finally had to surrender. The regiment was then forcefully incorporated into the Prussian Army as Infanterie-Regiment Nr. 54 Saldern.

In 1757, a new regiment was raised in Hungary. It consisted of a single battalion of 4 musketeer companies. A 5th company of grenadiers was also added, it was formed from former gunners. The new regiment was included into the Saxon Auxiliary contingent serving with the French.

In 1758, the grenadier company was disbanded and its troopers incorporated into the newly formed artillery companies. The same year, to avoid further contact with the Prussians, the contingent marched through southern Germany and had, by July, assembled in Strasbourg. On September 3, the regiment was part of the Saxon contingent, under the command of Prince Xaver, who encamped at Castrop, 15 km from Recklinghausen, on his way to make a junction with the French army of the Marquis de Contades in Westphalia. This contingent made a junction with Contades' army around mid September. As part of Chevert's division, it reinforced the army of the Prince de Soubise in Hesse. On October 10, the contingent first saw action at the battle of Lutterberg where its determined attacks decided the day for the French army. On October 20, the Saxon regiments rejoined Contades at Werl.

Besides the uniform worn at the beginning of the war in 1756 and after the capitulation of Pirna, the new regiments were re-dressed with white uniforms from Austrian depots, just adapting the distinctive colors. Because of the difference between Autrian and Saxon color pigments, the distinctive colors have perhaps changed a little bit (medium blue instead of light blue ?). 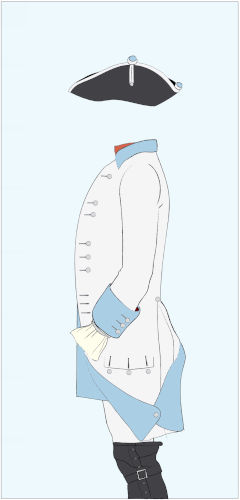 Ordinarfahne: sky blue field with rich white and red embroideries wearing a gold AR cipher on a stone pedestal surrounded by a green wreath and surmounted by a red and gold crown