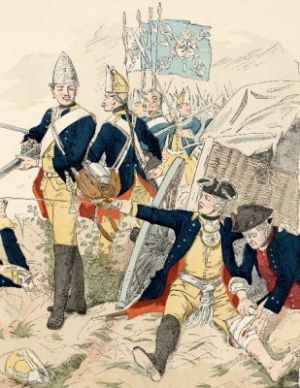 This fusilier regiment was raised June 27 1740 for Prince Friedrich Heinrich Ludwig of Prussia (aka Prince Henri), a brother of Frederick II. Its soldiers came from Garrison Regiment I Memel, Prussian Garrison Regiment II Pillau, from the Leibkompanie of the Grenadier Garde and from volunteers recruited across the empire. Its officers came from various Prussian infantry regiments. The new regiment was stationed in Potsdam.

At the beginning of the War of the Austrian Succession, in 1741, the regiment garrisoned the Fortress of Magdeburg. In September 1744, it was part of Frederick's Corps who besieged and occupied Prague before retreating in November. In 1745, the regiment served in Upper Silesia.

During the Seven Years' War, the regiment was under the nominal command by:

...and under the effective command of its successive Kommandeure:

From 1763, the regiment garrisoned Spandau and Nauen.

The regimental numbering system (Stammliste) was first used by Leopold I., Fürst von Anhalt-Dessau (Der alte Dessauer) in the Dessauer Spezifikation from 1737. Around 1780 the numbers were used in the printed Stammlisten, still with some variations for the fusilier regiments. It became official by "Cabinets-Ordre" from October 1, 1806. The present infantry regiment was attributed number 35.

The regiment was disbanded in 1806 after the capitulation of Erfurt, Magdeburg and Küstrin.

On August 26 1756, when the Prussian Army proceeded to the invasion of Saxony, the regiment was part of the centre column led by Frederick II. More precisely, it belonged to Keith's Corps. The centre column had concentrated at Brietzen and advanced unopposed upstream along the Elbe river by Torgau and Wittenberg, leaving Meissen to its left. On September 6, it encamped at Rothschönberg and finally reached Wilsdruf. While the main Prussian army moved forward to engage an Austrian army at Lobositz (October 1), the regiment remained in the Pirna country to maintain the blockade of the Saxon Army which surrendered on October 17.

In 1758, the regiment took part in the invasion of Moravia and in the unsuccessful Siege of Olmütz.

On August 12 1759, the regiment took part in the Battle of Kunersdorf where it was deployed in the first line of the right centre as part of Knobloch's Brigade. At a certain moment during this battle, Frederick II personally led the regiment, holding one of its colours in an attempt to rally routing troops. The regiment was the last to leave the battlefield.

On September 17 1760, the regiment took part in the Combat of Hochgiersdorf. On November 3, it fought at the Battle of Torgau where it suffered heavy losses.

In 1761, the regiment remained at the entrenched camp of Bunzelwitz.

From August 8 to October 10 1762, the regiment took part in the siege and recapture of Schweidnitz.

The lace of the drummers consisted of a 2.7 cm wide white braid decorated with yellow and blue squares in a checker board pattern.