A battalion was raised as a “Grenadier Guard Battalion” in Berlin in November 1698 by Colonel Anton von Pannewitz.

In May 1713, the regiment contributed six companies to the establishment of the 23rd regiment of infantry (IR23). Three years later, in 1716, it became a regular infantry regiment and incorporated 600 Swedish prisoners of war into its ranks.

In 1742, the regiment recovered its “Guard” status when it became the property of the Prince of Prussia.

During the War of the Austrian Succession, on September 18 1744, the regiment suffered heavy losses during its breakout from Prague. It later fought with distinction in the battles of Hohenfriedberg (June 4, 1745) and Kesselsdorf (December 15, 1745).

By 1756, the regiment garrisoned various towns and places around Berlin: Alt-Landsberg, Oranienburg, Spandau and Strausberg. It levied its recruits in the Alt-Mark and in the towns of Bernau, Köpenick, Lenzen, Spandau, Strausberg and Wittenberge.

The numbering system (Stammliste) was first used by Leopold I., Fürst von Anhalt-Dessau (Der alte Dessauer) in the Dessauer Spezifikation from 1737. Around 1780 the numbers were used in the printed Stammlisten, still with some variations for the fusilier regiments. It became official by "Cabinets-Ordre" from October 1, 1806. The present infantry regiment was attributed number 18.

The regiment was disbanded in October 1806 after the capitulation of Prenzlau and Spandau.

On August 26 1756, when the Prussian army proceeded to the invasion of Saxony, the regiment was part of the centre column led by Frederick II. More precisely, it belonged to Margrave Karl's Corps. The centre column had concentrated in the area of Brietzen and advanced unopposed upstream along the Elbe river by Torgau and Wittenberg, leaving Meissen to its left. On September 6, it encamped at Rothschönberg and finally reached Wilsdruf. While the Prussian Main Army moved forward to engage the Austrian Army at Lobositz (October 1), the regiment remained in the Pirna Country to maintain the blockade of the Saxon Army which finally surrendered on October 17. The defeated Saxon Army had to pass between two battalions of Prussian Gardes and was then received by Prinz von Preußen Infantry.

In the Spring of 1758, the regiment participated in the unsuccessful invasion of Moravia before retiring to Silesia. In August, the regiment was part of the corps who accompanied Frederick when he marched from Silesia to join Dohna to contain the Russian invasion of Brandenburg. On Tuesday August 22, this corps made a junction with Dohna at Manschnow. On August 25, the regiment fought at the Battle of Zorndorf where it formed part of the first line of the right division led by Count zu Dohna. At 3:00 p.m., its first battalion was charged in front and flank by Horvat Hussars. The battalion placed one of its platoon en potence to protect its exposed left flank and fired a deadly volley into the charging cavalry, breaking its charge and driving it back. While pursuing retreating Russian units, the regiment seized most of the army-chest, baggage and artillery. On September 2, a week after the battle, when it became clear that the Russian army was slowly retiring towards Landsberg, Frederick assembled the corps that he had brought with him from Silesia and left for Saxony where his help was badly needed. On October 14, the regiment took part in the Battle of Hochkirch where it was initially deployed in the centre of the first line. Around 7:00 a.m., the regiment advanced to the right the village of Hochkirch but was soon driven back by the Austrian cavalry, suffering heavy casualties.

From August to September 1762, the regiment took part in the siege and recapture of Schweidnitz, fighting in the Battle of Burkersdorf on July 21.

The uniforms depicted in this section were probably introduced in 1743. 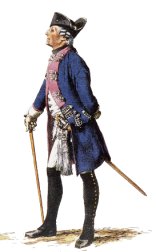 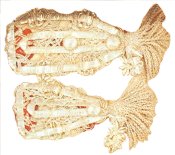 The narrow and wide drummer laces were identical, consisting of a silver braid with a thick rose-pink waved braid.

The pikes used as staffs for the colours were probably black.