The regiment was raised in 1691 from one company each of the regiments Nrs 1, 2, 3, 5 and 6 for colonel Hans Ehrentreich von Schöning. The same year, it served in Brabant and on the Rhine.

During the War of the Spanish Succession, on July 11 1708 the regiment fought in the battle of Oudenarde. At the end of the war, in 1718, it was increased by 1 company to 5 squadrons.

Upper Silesia was the inspectorate of the regiment and its garrison places were Falkenberg, Krappitz, Neustadt and Oppeln.

From March 31 to April 18 1758, the regiment took part in the siege of Schweidnitz. It then followed the Prussian army in its invasion of Moravia and, from May 27 to July 2, was at the siege of Olmütz. On October 10 1758, it took part in the battle of Hochkirch where it was deployed in the centre of the first line in Zieten's cavalry brigade.

From February 24 to March 4 1759, the regiment was part of the small Prussian corps under the command of major-general von Wobersnow who made an incursion in Poland against the Russian magazines. During this incursion, Wobersnow's forces destroyed food supply which would have supplied 50,000 men for 3 months. On November 20 1759, the regiment took part in the battle of Maxen where it was attached to Bredow's brigade. Completely surrounded, the entire Prussian force finally surrendered as prisoners of war (one of the captured Eskadronstandarte may now be seen at the Stadsmuseum Gent).

In 1760, 2 squadrons were re-raised. They joined the corps of prince Henri. 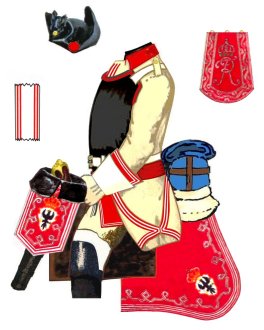 Saint George Crossbow Guild of Ghent and Stadsmuseum Gent] for its kind authorisation to reproduce the Eskadronstandarte on this display at the museum.