The regiment was raised on December 4, 1674 by the Comte de Grignan, lieutenant-general in Provence to give assistance to Messina against Spain. It initially counted 21 companies.

In 1681, the regiment contributed to the occupation of Casale.

In 1698, the regiment was reduced to a single battalion.

In 1727, the regiment took part in the training camp at Stenay.

In 1733, at the beginning of the War of the Polish Succession (1733-35), the regiment was at the camp of Metz and then took part in the occupation of the Duchy of Lorraine. In 1734, it served in the capture of Trier and Trarbach, in the attack of the Lines of Etlingen and in the siege of Philisbourg. In 1735, it fought in the Combat of Klausen.

In 1736, the regiment was stationed in Longwy.

In 1741, during the War of the Austrian Succession (1740-48), the regiment initially served in the Army of the Meuse. In 1742, it garrisoned Paderborn before being sent to Bohemia. In 1743, it took part in the relief of Eger (present-day Cheb). It then retreated towards France were it was placed in garrison in Landau. In 1744, the regiment was transferred to Italy where it took part in the attack on the entrenchments of Montalban and Villefranche, in the capture of Nice, Villefranche and Montalban, in the passage of the Alps through the Stura Valley, in the attack of the entrenchments of Pierrelongue and in the capture of Château-Dauphin. In 1745, it was at the sieges of Acqui, Serravalle, Tortona, Piacenza, Pavia, Alesandria, Valenza, Asti and Casale and in the Combat of Rivaronne. In 1746, it took part in the relief of Valenza, in the siege of Acqui, in the battles of Piacenza and Rottofreddo. The same year, the regiment was re-established at two battalions. In 1747, it participated in the recapture of the Sainte-Marguerite Islands and in the reduction of Nice, Montalban, Villefranche and Vintimiglia, and in the relief of Vintimiglia.

In December 1748, the regiment was reduced to a single battalion but, on March 10, 1749, it incorporated the disbanded Ponthieu Infanterie as its second battalion.

In 1753, the regiment took part in the camp of the Sambre.

During the Seven Years' War, the regiment ranked 61st and was under the command of:

In 1756, the regiment was at the camp of Dunkerque.

In 1757, the regiment joined the Army of the Lower Rhine at the camp of Stockheim. From April 27 to June 17, the regiment was part of the Reserve under the Prince de Soubise. On July 26, during the invasion of Hanover, the regiment was at the Battle of Hastenbeck where it supported the leading columns of the left wing. After the victory, it participated in the invasion of Hanover. After the Convention of Kloster-Zeven, it followed the main body, led by the Maréchal Duc de Richelieu, who encamped at Halberstadt, in Prussian territory, on September 28. The regiment was placed in the centre of the first line. A few weeks later, on October 7, the regiment left this camp, under the Duc de Broglie, to reinforce the army of the Prince de Soubise. On November 5, the regiment took part in the disastrous Battle of Rossbach where it was brigaded with Poitou Infanterie in the Reserve under Broglie. During this battle, it heavily suffered and its colonel, the Comte de Saarsfeld was seriously wounded; Lieutenant-Colonel du Rivier was taken prisoner; Major d'Ablancourt was wounded; Captain Laffite and Lieutenants Couverson, Chatillon and Verseuil were killed; Captains Thoisy, Thiaumont, Varignon, d'Esparbès de Lussan, Pavan, d'Ivory, Tesson, Dutertre and Lieutenants Clapiers de Capiane , Bourcia and Kerver were wounded. After this crushing defeat, the regiment retreated to the Rhine. At the end of the year, it took up its winter-quarters in Creuzburg and Treffurt in Hessen.

At the end of May 1759, when the French Army of the Rhine launched its offensive in Western Germany, the regiment remained on the Rhine as part of the Corps of the Marquis d'Armentières. On June 5, a battalion of the regiment who was posted at Erbefeld along with the Légion Royale was attacked by surprise by the light troops of the Hereditary Prince, who had passed the Ruhr. The regiment was dislodged, losing several men killed or wounded and 92 men taken prisoners. It then retired in good order to Medmann and then to Düsseldorf. By October 25, still attached to d'Armentières's Corps, the regiment was at the main camp at Bochum. By November 8, it was part of the garrison of Münster when the Allies laid siege to the city. On November 19, it made a sortie along with Touraine Infanterie against the Allied positions at Albachten.

In 1761, the regiment defended Cassel and, on July 16, took part in the Battle of Vellinghausen where it distinguished itself but suffered heavy losses.

On June 24 1762, the regiment was at the Battle of Wilhelmsthal. It later returned to France and was sent to Saint-Brieuc. 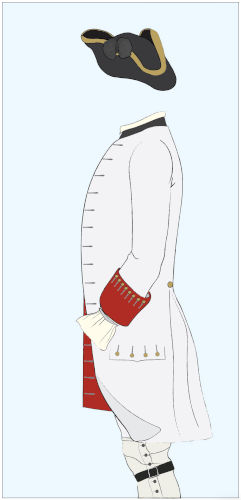 Ordonnance Colours: a white cross; first and fourth cantons red with a black lozenge and their second and third cantons black with a red lozenge. Ordonnance colours remained unchanged from 1675 to 1780.