Headgear was a large bicorne with national cockade, black loop and regimental button. Until 1762 it bore an edging in white tape. Under the bicorn an iron skull cap was worn when in action.

White plumes were worn for parades from 1762 onwards.

From early times (1688) the coat worn by these regiments of heavy horse was usually a buff leather Kollet, which had excellent protective properties against sword cuts and was relatively light and flexible. Facings were worn on the collar, the Swedish cuffs and on the narrow shoulder straps. The short turnbacks were in the coat colour. Apart from the colour of the facings and buttons, each regiment was distinguished by a braid edging to the front of the coat, the cuffs, turnbacks, waistcoats and carbine bandoliers. The skirts of officers' tunics were originally to the knee, but were buttock-length in 1756; those of the men were always cut short, so that they just covered the buttocks.

From about 1735 onwards, the leather tunics were replaced with white cloth items, only Regiment Nr 2 retained the yellow colour and they were then known as “the yellow riders”. The cuffs and turnbacks were edged in the regimental lace, as was the front of the tunic.

Waistcoats were originally in the coat colour, but in 1735 they were changed to be in the regimental facing colour, edged in the regimental lace. Only the Regiment Gensdarmes Nr 10 retained them in blue as before. After the 1st Silesian War (1741-1742) the facings of some regiments changed; they then remained the same until 1806.

All ranks, except officers, wore a waist sash in the facing colour over the tunic.

Breeches were in buff leather. 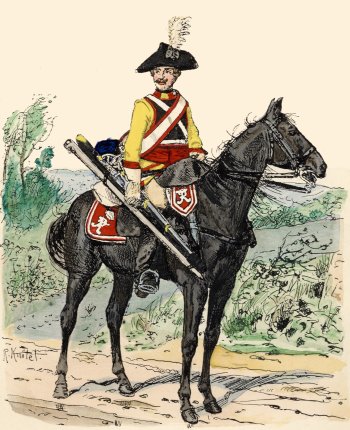 Every trooper was equipped with a brace of pistols, a heavy, straight-bladed sword and a carbine.

From about 1720 a two-piece metal cuirass was worn, but from 1735 the back plate was discarded and the front plate held in place by straps. The cuirass was polished for the Garde du Corps, blackened for the other regiments. These breastplates were abandoned under king Friedrich Wilhelm II.

All line cavalry wore white gauntlets. Leatherwork was white. The wide belt carrying the carbine was white edged in the regimental distinctive colour as shown in the accompanying illustration.

Other ranks wore a pouch (very much like the sabretache of the hussars) from the waist belt, which sat high up on the left hip. It was in the facing colour, edged with the regimental lace and bore various designs.

Troopers had black pouch lids with a round brass plate bearing the Prussian eagle.

Harness was black with steel fittings.

NCOs cuffs were decorated with gold or silver lace, the pattern varying from regiment to regiment.

The lids of NCOs' cartouches were in the facing colour, edged in braid in the button colour, bearing a crowned round plate showing the royal cipher.

From 1762, NCOs' bicorne had a white plume tipped black for parade.

Standard bearers had standard bandoliers in the facing colour, edged and fringed in the button colour. The standard pike was in the form of a lance.

The cuirasses of officers were edged in gilt metal and their shoulder straps were covered in gilt plates. On the top centre of the breastplate they wore the crowned Prussian crest in trophies of arms, all gilt.

The lids of officers' cartouches were in the facing colour, edged in the regimental braid, usually enclosing trophies of arms and the crowned royal cipher. Officers' cartouche lids of the 7th, 8th, 9th, 11th and 12th Regiments bore the crowned black Prussian eagle on trophies of arms. Officers of each regiment wore gold or silver lace decorations to their buttonholes that were unique to their regiment.

Apart from the daily uniform, officers also had a white state uniform, with lapels, Swedish cuffs and collar in the colour of their waistcoats. On each lapel were six embroidered lace loops, two under them, two on the cuff, two on each pocket flap and four in the small of the back. The small clothes were buff.

From 1762, officers' bicorne had a white plume with a black base.