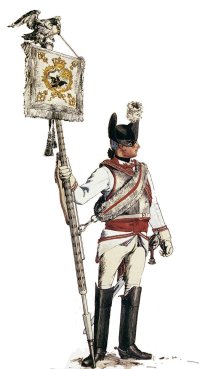 The regiment was raised in October 1740 in Potsdam and initially consisted of one squadron of 178 men. Candidates for all ranks were selected from existing cavalry regiments. King Frederick II was Chef of this regiment.

Mark Brandenburg was the inspectorate of the regiment and its garrison places were Berlin, Charlottenburg and Potsdam. From 1753, it garrisoned only Potsdam.

At the beginning of the Seven Years' War, the regiment counted 1 squadron. In 1756, it was raised to 3 squadrons, mostly using men of the Saxon Gardedukorps, who had been captured at Pirna.

During the Seven Years' War, although Frederick II was the nominal Chef of the regiment, effective command was assumed by:

The regiment was raised to 5 squadrons in 1798.

By 1806, the regiment was still known as “Gardes du Corps”. That year, on October 14, it was on the right wing at Auerstädt. Following the battle, it escaped to Eastern Prussia and joined l`Estocq's Corps. It then became the new 3rd Kürassiers.

On August 26, 1756, when the Prussian army launched the invasion of Saxony, the regiment was part of the centre column led by Frederick II. More precisely, it belonged to Keith's Corps. The centre column had concentrated at Brietzen and advanced unopposed upstream along the Elbe River by Torgau and Wittenberg, leaving Meissen to its left. On September 6, it encamped at Rothschönberg and finally reached Wilsdruf. On October 1, the regiment took part in the Battle of Lobositz where it was assigned to the cavalry brigade of Major-General Pennavaire in Kyau’s Division. During this battle, together with the Gens d'Armes and 2 squadrons of the Prinz von Preußen Cuirassiers, they overthrew 2 Austrian cavalry regiments, took 3 standards and captured the Austrian General Fürst Lobkowitz. After the surrender of the Saxon Army at Pirna at the end of October, the regiment was raised to 3 squadrons, mostly using men of the Saxon Gardedukorps.

In April 1757, the regiment was part of the Prussian army who proceeded to the invasion of Bohemia. On May 6, it took part in the Battle of Prague where its 1st squadron was deployed in the first line of the right wing under von Penavaire and its 2nd and 3rd were deployed to the west and south of Prague to contain the Austrians against the Sazawa. Its 2nd and 3rd squadrons then stayed for the siege of Prague while its 1st squadron followed Frederick and, on June 18, took part in the Battle of Kolin. Where it was deployed in the first line of the cavalry right wing under the Prince von Schönaich. At the end of August, the regiment was part of the small Prussian army hastily assembled at Dresden by Frederick to head towards Thuringia and to offer battle to the Franco-Imperial army invading Saxony. On August 30, it accompanied Frederick in the vanguard when the army left Dresden. On September 14, when Frederick was forced to divide his army to contain the French in the region of Magdeburg and to secure the Prussian magazines in the area of Torgau, the regiment remained with Frederick at Erfurt to observe the Franco-Imperial army. On November 5, at the Battle of Rossbach, the 3 squadrons of the regiment were deployed in the second line of the right wing under Major-General von Seydlitz. They broke the Austrian Trautmansdorf Cuirassiers and Bretlach Cuirassiers as well as 2 French regiments and took 2 pairs of kettle drums and 4 standards. On November 6 at Spielberg, during the pursuit, they took 2 howitzers and 5 cannon. On December 5 at the Battle of Leuthen, the regiment was deployed in Lentulus' Brigade in the first line of the cavalry right wing under Lieutenant-General von Zieten. It distinguished itself once more when, together with the Gens d'Armes, it broke the Jung-Modena Dragoons, took a number of colours and standards and 15 cannon.

In March 1758, the regiment took part in the invasion of Moravia. From May 27 to July 2, it covered the unsuccessful Siege of Olmütz. On August 10, the regiment was part of the corps who accompanied Frederick when he marched from Silesia to join Dohna to contain the Russian invasion of Brandenburg. On Tuesday August 22, this corps made a junction with Dohna at Manschnow. On August 25, the regiment fought in the Battle of Zorndorf where it formed part of the first line of the cavalry left wing. It charged over the Zubern-Grund and into the milling mass of disordered Russian infantry, casting it into irretrievable confusion, and taking a number of colours and cannon. On September 2, a week after that battle, when it became clear that the Russian army was slowly retiring towards Landsberg, Frederick assembled the corps that he had brought with him from Silesia and left for Saxony where his help was badly needed. By September 11, his army had reached the area north of Dresden. On October 7, the regiment marched to Bautzen. On October 10, the regiment took part in the Battle of Hochkirch where it was deployed in the centre of the first line in Zieten's Cavalry Brigade.

In 1759, the regiment did not take part in any significant action.

On July 21, 1762, the regiment was at the Battle of Burkersdorf. From August 7 to October 9, it covered the Siege of Schweidnitz. On August 16, it took part in the Battle of Reichenbach.

In campaign, the uniform of the Gardes du Corps was similar to those of the other Cuirassier regiments of the Prussian army. In court service, they were distinguished only by a red supravest edged with silver laces, bearing an eight-pointed silver star on the chest.

In 1756, when the Saxon Garde du Corps was forcibly incorporated into the Prussian Gardes du Corps, it kept its original uniform. 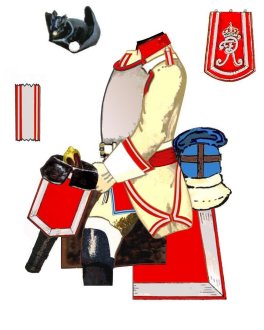 Troopers were armed with a heavy straight-bladed sword, a pair of pistols and a musket. They wore a silver breastplate edged red and fastened by leather straps. The musket strap was white edged with the regimental lace.

N.B.: silver embroidered buttonholes and a golden aiguillette on the right shoulder decorated the red full dress uniform but were not present on the service uniform.

In 1741 the regiment was presented with a standard in the model of a vexillum measuring 50 cm by 50 cm. This standard had a silver eagle instead of the usual spear point; the cloth hung from silver chains. The pole of the standard was a white tournament lance reinforced with iron hinges.

The standard bearers had silver standard bandoliers with a red central stripe, fringed in silver.

The vexillum had a white field fringed in silver; with a silver central medallion carrying an armed black eagle surmounted by a silver scroll edged gold bearing the motto "Pro Gloria et Patria" and surrounded by a crowned laurel wreath. Decoration in each corner (crowns, laurel wreaths and “FR” ciphers on a white medallion).

On February 29 1757 two new "standards" were presented to the Saxon Garde du Corps squadrons forcibly incorporated into the Prussian Garde du Corps. These new standards were simply tournament lances without vexilla. If these junior squadrons ever received vexilla, it probably wasn't before 1775.