The lock plate was engraved with 'POTSDAMMAGAZ' and 'S&D' (the initials of Splittgerber and Daum, the company which ran the royal arsenal between 1723 and 1740. The same basic weapon, with minor modifications, continued to be produced in the Potsdam factory from 1740 to 1760. The fittings were of brass, the conical ramrod of iron. The oval foresight was of brass; the rearsight was fitted onto the rear end of the barrel. The pan of the lock was of angular shape. The thumb plate, on top of the neck of the butt, bore the crowned royal cipher: 'FWR' (Friedrich Wilhelm Rex I).

This weapon was the first standardized musket produced in Potsdam and replaced similar weapons, previously supplied by the Henoul factory in Liège. The extreme barrel length was due to the misconception that accuracy of the projectile was a function of the length of the barrel.

When Frederick the Great succeeded to the throne in 1740, he expanded the army and ordered the barrels of all existing muskets to be shortened by 11 cm. This lightened the weapon and made it much easier for the shorter men of the newly-raised Fusilier regiments (Nrs 33 onwards) to load and use. From this year on, the thumb plates bore the crowned royal cipher 'FR'. This musket continued to be produced, without modification, until 1773. The calibre of this new weapon was increased to 18,5 mm. 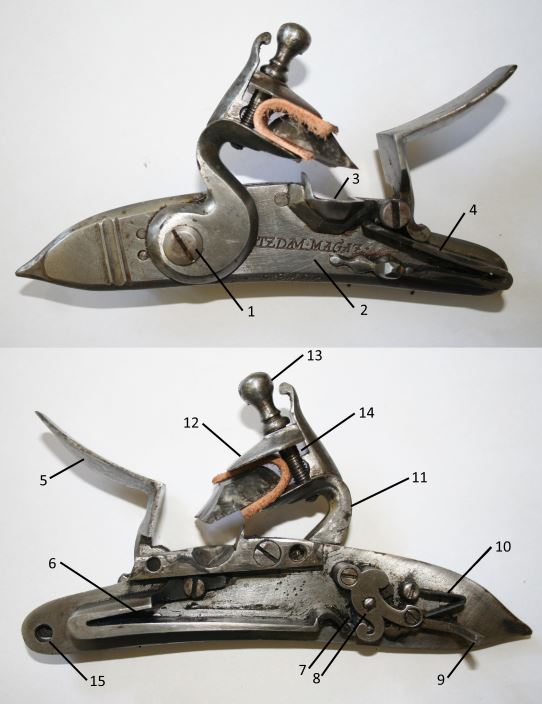 The same flintlock plate mechanisms were used on all other firearms, but in shorter versions (Kürassiers, dragoons - 155 mm, hussars - 154 mm and 147 mm). At some time after 1740, the maker's initials on the lock plate changed from 'S&D' to 'DSE' (David Splitgerbers sel Erben).

The cylindrical iron ramrod was introduced only in 1773 and the calibre of the weapon was increased to 19 mm.

The conical touchhole, aimed at speeding up the rate of fire of the weapon, was introduced in 1780.

Performance of the musket

To date, no empirical measurements are known for the muzzle velocity of the musket, when using full military charges. This is due to the lack of information on the powder charge itself, which currently prevents any direct testing. The nearest to such a test was one conducted in 2007, which used a 0.626 calibre ball, and 110 grains of FFg Goex powder. However, this test could still be used to extrapolate to the likely performance of the weapon, provided we know the following:

Based on the above, it appears the minimum muzzle velocity of this weapon was ~305 meters/second, though it is more likely the muzzle velocity was closer to 320-350 m/s. These results are quite close to a description of muzzle velocity in the range of 510 paces/second (~375 m/s) (Duffy), though this description does not specifically mention this velocity belongs to the M1740.

The use of a 16,5mm (0.65 calibre) ball, in an 18,3-18,5mm (0.73 calibre) bore, would have produced a gap of 0,95-1,0mm on all sides. In comparison, the Brown Bess, with a 19 mm bore, and 17,5 mm ball, will produce a gap of just 0,75 mm on all sides, and a French M1728 musket would have had a gap of 0,5-0,6 mm. Consequently, even with the addition of the paper wrapping of the cartridge to act as a wad, the accuracy and muzzle velocity of the weapon would have been inferior to most of the muskets used by the great powers, especially when at typical tactical ranges (100-150 m). This is confirmed by the previously mentioned musket test, which noted that the M1740 was one of the more inaccurate weapons of those listed (though this was exacerbated by the use of an undersized ball, relatively to the military load). This reflected the doctrine of the Prussian army, which emphasized speed of fire over accuracy: the greater windage allowed for rapid reloading, even with a heavily-fowled barrel. This trend would only accelerate over the course of the 18th century, with an increase of bore size to 19 mm late in Frederick II's reign. This, and the emphasis on speed over accuracy, also goes a long way to explain in part, the observation that Prussian soldiers typically took more casualties in a firefight than the Austrians did: the Austrian weapons were simply more accurately-aimed. To drive home this point, a test was conducted in 1755 on a target 10 paces across and 10 feet tall (~7x3 meters), with the participants being Prussian Grenadiers. Their fire produced the following results:

In comparison, the newer muskets used by Scharnhorst in 1813 scored ~44% accuracy at 300 paces, against a company-sized target (1.8x~30 m). A test conducted by Muller with Napoleonic British soldiers produced a minimum accuracy of 18% at 200 yards, and 15% at 300 yards (300 paces would be around 225 yards). Even allowing for the broader (though shorter) target in Scharnhorst's test, the M1740 musket proves remarkably abysmal in the hands of Frederick's soldiers: the lower accuracy, couple with inadequate training in aiming the weapons, combine to produce the above results.

Prior to 1722, officers were expected to provide their own weapons and equipment; many carried pistols made by Francois Henoul of Liège.

From this date, Frederick opened the arsenal in Spandau, west of Berlin. All weapons produced in Spandau still bore the 'POTSDAMMAGAZ' and 'S&D' marks and the crowned cipher 'FR' on the thumb plate.

All mounted Prussian officers carried a pair of pistols; from 1731 this became their standard weapon.

The hilt is brass; on both sides of the blade is the crowned royal cipher 'FWR'.

This Pallasch (broadsword) was in use in the artillery but also in a few infantry regiments like, for instance, Anhalt-Dessau Infantry (IR3) and Tresckow Infantry (IR32). 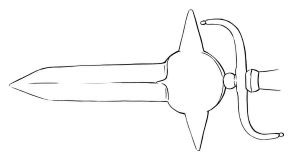 Still in use during the Seven Years' War, some of them were part of the booty captured by the Austrians at the Battle of Kunersdorf.

On both sides of the blade are the crowned royal cipher; the shaft is of brown wood.

On both sides of the base of the blade is an oval brass plug bearing the Prussian eagle, under this, along the blade is 'BERLIN', between small diamond-shaped markings. The grip of the gilt hilt is wound with gilt wire. The sword strap is silver with two black stripes, the tassel is of silver and black threads. This is the strap of a junior officer.