The regiment was formed in 1680 from the garrison companies of Minden and Lippstadt in Westphalia.

In 1702, the regiment was incorporated into the regular Prussian Army.

From 1726, the garrison places of the regiment were Soest and Hamm (from 1746, part of the regiment also garrisoned Unna). Its military district was the County of Mark (Westphalian enclave) and included the towns of Altena, Bochum, Hamm, Hattingen , Lünen, Plettenberg, Soest, Unna and Wetter.

At the beginning of the War of the Austrian Succession, in 1741 and 1742, the regiment was posted at Göttin. On December 15 1745, it took part in the Battle of Kesselsdorf.

During the Seven Years War the regimental Chefs were:

In 1763, one of its battalions was stationed in Hamm and the other in Soest.

The numbering system (Stammliste) was first used by Leopold I., Fürst von Anhalt-Dessau (Der alte Dessauer) in the Dessauer Spezifikation from 1737. Around 1780 the numbers were used in the printed Stammlisten, still with some variations for the fusilier regiments. It became official by "Cabinets-Ordre" from October 1, 1806. The present infantry regiment was attributed number 9.

The regiment was disbanded in 1806 after the capitulation of Erfurt.

On August 26 1756, when the Prussian army was ordered to proceed to the invasion of Saxony, the regiment was part of Ferdinand of Brunswick's column which had concentrated at Halle and advanced unopposed through Leipzig, Chemnitz, Freyberg and Dippoldiswalde, to the village of Cotta (reached on September 9) south of the Elbe near Pirna. On October 1, the regiment took part in the Battle of Lobositz where it was assigned to the brigade of Lieutenant-General Ferdinand of Brunswick. It reached the battlefield late in the afternoon. During this battle, its colonel was mortally wounded.

On July 23 1759, the regiment took part in the Battle of Paltzig where it was attached to Hülsen's Division deployed in the centre in the first line of infantry. Its brigade initiated the third assault on the Russian centre along with Manteuffel's Brigade. In furious close combat, in heat, powder smoke and dust, they managed to break through the first Russian line. Manteuffel was seriously wounded and his adjutant was struck down. However, with ammunition low, both brigades had to retreat and the assault collapsed. A few weeks later, on August 12, the regiment fought in the Battle of Kunersdorf where it was deployed in the first line of the left centre as part of Jung-Stutterheim's Brigade and formed part of the initial attack between the Kleiner Spitzberg and Mühl-Berg. The regiment suffered heavy casualties in the two preceding battles and was reduced to a single battalion. On November 20, this battalion took part in the Battle of Maxen where it was attached to Mosel's Brigade. Completely surrounded, the entire Prussian force finally surrendered as prisoners of war.

By August 20 1761, the regiment was with Frederick's Army in the camp of Bunzelwitz.

In 1762, the only task that the regiment could perform, was to garrison Neisse. 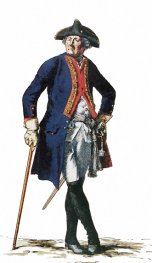 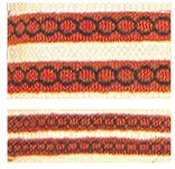 The uniforms of the drummers were similar to those of the privates but had much more elaborate lacing (drummer lace consisting of a white braid with a wide red central stripe decorated with black links) and other peculiarities: