Military organisation of the Holy Roman Empire dates as far as 1512. The Habsburg Emperor Maximilian I organised the Empire into 10 Reichskreise (circles or more precisely districts). These districts included a total of some 2,000 independent states and individuals. By 1756, the regulations for the raising and maintenance of the so called Reichsarmee (the Imperial army) had undergone a good number of changes. This will only be a very rough summary of military organisation as well as a presentation of the various district contingents making up for the Empire's armed forces – an army known among contemporaries to be composed of the finest as much as of the worst troops of all Europe.

The armies of the larger, or more prominent princely territories, not covered in the Armies section otherwise, will be presented individually here, whereas the remainder will merely be listed as part of it's respective Imperial District.

All of the districts' more than 300 immediate territories were to provide their preset contingent and pay their pre-estimated so called Römermonate, "Roman months", a military tax first raised by Charles V for his 1521 campaign against Rome. Besides these territories, more than 1.400 immediate imperial estates (unmittelbare Reichslande) of the Rhenish, Swabian, and Franconian knightages were not part of any district and, thus, not obliged to contribute troops, nor did they pay the Römermonate. Their tribute was the so called "subsidium charitativum" instead – an irregular wartime ex-gratita donation.

The number of troops – i.e. the contingent – each district was to contribute had been minutely regulated in the so called Reichsmatrikel (the Imperial register). This register only fixed the total return for each district, whereas the council of district would distribute the share of each member according to it's size. It should be noted that many sovereigns own "household" troops were excluded from the register of a district, and only few of these were sent as district tribute. Their sovereigns usually preferred to hire them into foreign service, as it was done by Mainz, the Palatinate, Württemberg and Bavaria.

Theoretical establishment of the Empire's standing force – the "miles perpetuus" – to be maintained in peacetime was an accepted 40,000 men. This "simplum matriculare" was set at 12,000 horse including 2,000 dragoons, and 28,000 infantry. A doubled peacetime establishment proposed in 1702 had never been fully agreed to. Even the "simplum matriculare" had been regarded to be more of an ideal rather than obligatory. As a result, most sovereigns took matters with considerable ease, for neither Imperial, nor district administration possessed the means for control or authority to sanction in case of non-compliance. Even the "simplum" peacetime establishment had probably not been maintained. An example would be the 1725 Westphalian District's register bill. It includes the rather curious and awkward entry of the Wild- und Rheingraf von Grumbach, who simply registered his sons – 1 private aged three, 1 first class private aged five, and 1 corporal aged eight. Others did not even bother to register anyone at all. Theoretical wartime establishment was to be the "triplum" with a formidable force of some 120,000 men:

This army was anything but an effective fighting force. The many district units assembling in 1757 were in fact multiple contingent regiments of untrained recruits, such as the Swabian District's Hohenzollern Cuirassiers. It was made up of no less than 61 contingents, the largest being 95 men provided by the Prince-Bishop of Augsburg and the smallest being the Abbess of Gutenzell's single horseman. They had no mounts in peacetime, nor had they undergone any kind of concerted training. They were unable to execute even the simplest manoeuvre. A regiment would serve with about as many regulations as the number of contingents it would include. It took several month of basic training to reduce this chaos to some extent and adopt a single regulation at least within a regiment. The Würzburg troops were trained according to the Austrian regulation. The Palatinate troops to their own 1740 regulation. Württembergers and Swabians used the Württemberg regulation, an imitation of the 1754 Prussian one. The Upper Rhine contingents were trained according to the Darmstadt regulation. The Bavarian regiment used its own regulation, whereas Salzburg contingent of this District used the Austrian one.

By 1756, taxes perceived were used to pay the Imperial General Staff, directly subordinate to the Reichstag (Imperial Diet) in Regensburg, as well as to maintain a reasonable artillery train (the Reichsreserveartillerie). Armament and maintenance, though, were under the responsibility of the sovereigns of each contingent of the army.

N.B.: for details on the administrative organisation of the Districts, please refer to the article on the Holy Roman Empire.

Austria and Burgundy had to contribute normally 11,529 horse and 24,645 foot. These numbers were never reached. The Austrian troops were with few exceptions never seen as a part of the Reichsarmee. They were regarded as national Austrian troops. In the later years of the war the Reichsarmee was sometimes actually seen as a part of the Austrian army. Only the regiment Blau Würzburg in Austrian pay, the cuirassier regiments Bretlach and Trautmannsdorff, the hussar regiments Splényi and Szechényi as well as some Grenz infantry regiments were assigned to the Reichsarmee for a longer period.

At the beginning of the Seven Years War the armed forces of Mainz consisted of:

The prince-elector of Mainz Archbishop Johann Friedrich von Ostein was among the closest allies of the Emperor, he immediately supplied one regiment to serve in Austrian pay: the Mainz Infantry Regiment (aka Lamberg Infantry Regiment). This regiment fought for the entire war along with the Austrian armies.

The remaining Mainz armed forces amounted to some 7 battalions, 1 company of dragoons, a smallish artillery and a miner corps with a total of some 5,202 men in March 1757. For his contribution to the Reichsarmee, the archbishop extracted troops from all his foot regiments to form a regiment of four battalions:

Only smallish and under strength military forces were to be found within the dominions of Archbishop Clemens August of Cologne as a result of his costly lifestyle and general lack of interest for his armed forces. However, on February 25 1715, when Archbishop Josef Clemens had returned home after 12 years of absence, he had established, besides palace guards units, two regiments of horse and two of infantry, raising a third body of cavalry in 1717. His successor, Archbishop Clemens August, disbanded all the cavalry raising a weak but fashionable Husaren Corps. As many other German princes, Clemens August had also arranged for a subsidies contract. In 1751, he had agreed to maintain an auxiliary corps of 6,000 men whenever France would require them. When, in 1757, France called for these troops, not a single formed body was available. Instead, Louis XV had to content himself with a mere 1,800 men, that were recruited into French regiments.

At the beginning of the Seven Years War the Cologne armed forces consisted of:

However, the contribution of Clemens August to the Reichsarmee in 1757, consisted only of the following units:

Throughout the war, Cologne's contingents were usually under strength, poorly armed and uniformed, and plagued with a high rate of desertion. Provincial militia (Landmiliz) and a number of units remained within its territories on fortress duty, to guard Clemens August's residence in Bonn, as well as to protect the inhabitants of the Westphalian dioceses from friend and foe, as these provinces became a major theatre of operations.

4. Elector of the Pfalz (Kurpfalz)

For this district, the Elector of the Pfalz contributed one infantry regiment (2 battalions) and one cavalry regiment (3 squadrons) to the Reichsarmee: 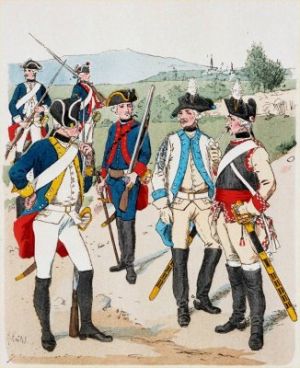 Troops of the Franconian District in 1781. - Source: Richard Knötel Uniformkunde

In 1756, the household troops of the Prince-bishop of Würzburg consisted of:

The contribution of Würzburg and Bamberg to the register of the district consisted of:

In contrast to most other Imperial principalities, the Würzburg armed forces were found in a good state of readiness, even the district units were maintained properly, though, all units were not up to strength. The military establishment of the principality also included an Artillery and Ingenieurs Akademie and a well esteemed cannon foundry. In September 1756, the prince-bishop had signed a subsidies contract with Austria, in which he agreed to send 4,000 men as auxiliaries to the Austrian army: one regiment in Austrian pay, the other at his own expense. According to this subsidies contract, the troops who took the field were:

The latter two infantry regiments were not part of the contribution of the Franconian District or of any other district. They were rather household troops of the Archbishop of Würzburg.

The artillery company served the battalion guns and four 12-pdr howitzers, that formed part of the heavy artillery of the Reichsarmee in 1757. The Würzburg and Bamberg units joined the Franconian District regiments in 1757. 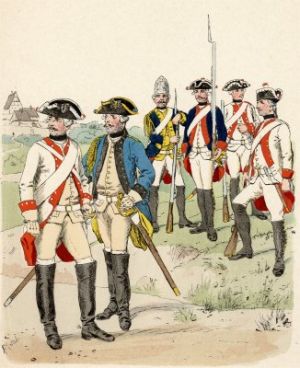 Troops of the Swabian District in 1781. - Source: Richard Knötel Uniformkunde

In 1757, the contribution of Münster and Paderborn to the Reichsarmme (2,400 infantrymen under the overall command of Colonel von Nagel) consisted of the following units :

N.B.: Münster supplied 118 artillerymen who served the battalion guns of the 3 aforementioned regiments as well as those of the 2 regiments (Nothast and Wildenstein) raised by the Archbishop of Cologne as part of the Electoral Rhenish District contingent.