The Reichsreserveartillerie was not some sort of reserve of ordnance to be used in case of emergency, but simply the Reichsarmee's heavy artillery. According to an Imperial resolution of 1734, each Imperial Circle had to provide two 6-pdrs.

In 1757, despite the aforementioned resolution, the Circle of Franconia and the Circle of Bavaria were the only ones to supply artillery pieces to the Reichsarmee. There was no modern, serviceable ordnance in the Franconian arsenal, so some Kreisstände (members of a circle) lent material to the circle. The same presumably applied to Bavaria.

From 1762, the unit was organised as follows:

N.B.: personnel was probably recruited by the commander of the unit. If necessary, foot soldiers were requisitioned to provide additional manpower.

In August 1757, Hildburghausen requested four 12-pdrs to be delivered by Nuremberg. It is not known if the city obeyed. The artillery pieces lost at the Battle of Rossbach were later said to have belonged to Nuremberg, Brunswick and Weimar. On the other hand, no record has been kept of such a loan at the Arsenal of Nuremberg. Two regimental guns belonging to Ansbach (probably 3-pdrs not directly attached to any regiment) are known to have been lost and two 12-pdrs belonging to the Reichsreserveartillerie are known to have been captured by the Prussians.

In 1758 (non-exhaustive listing based on known sources):

The colour of the carriages varied from one contingent to another:

The Reichsreserveartillerie probably accompanied the Reichsarmee throughout the war but is specifically mentioned only at the Battle of Rossbach (November 5 1757), at the Combat of Korbitz (September 21 1759), at the Combat of Strehla (August 20 1760) and at the action of Brettin/Torgau (August 27 1760). 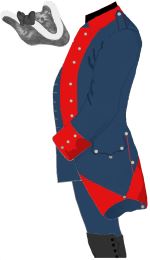 Troopers were armed with musket and a sabre.

The drivers of the Roßpartei had blue uniforms with yellow facings.

Documents from the State Archives Nuremberg, Würzburg and Bamberg and from the Hohenlohe Central Archives.

An anonymous contributor for the initial version of this article.