The regiment (12 companies) was raised at Daroca in Aragon on March 27 1735 by King Philip V in memory of his second wife, Queen Isabel Farnesio. It was named “Real de la Reina Dragones” and placed under the command of Colonel Don Joaquin Ponce de Leon Duke of Arcos. It consisted of:

The new regiment took up its quarters in Zamora.

In 1749, the regiment took up quarters in Daroca.

At the beginning of July 1760, the regiment was sent to Jeréz de la Frontera.

On January 14, 1762, the regiment set off from Lorca for the planned invasion of Portugal and, on February 11, took up cantonments in Olias in the Province of Toledo. On March 2, it resumed its march towards Old Castile. On March 15, it reached Alaejos. By April 14, the regiment was at Ciudad Rodrigo where a force of 10,000 men had been assembled. On May 13, the grenadier company of the regiment was detached to the Fort de la Conception along with the grenadiers of Africa Infantry and 200 Swiss to cover the frontier. On May 16, a squadron of the regiment left for the place of Gallegos. On June 5, the entire regiment concentrated at Gallegos. On June 6, it encamped in Valdemuela where it joined the army.. On July 8, after the surrender of Castel Rodrigo, the regiment retired to Ciudad Rodrigo. On August 4, it encamped near Almeida and took part in the Siege of Almeida which capitulated on August 25. On August 30, the regiment marched to Aldea Nova and, on September 5, to San Pedro. It then entered into Extremadura with the troops of General Rivaguero to guard the place of Alcántara. It then penetrated into Portugal and, on September 9, captured the place of Salvatierra. On September 14, it encamped in Penhagarcia. On September 21, it advanced on Castelho Branco. On October 1, part of the regiment took part in an engagement near Sarcedas. On October 18, it retired to Castelho Branco. On October 26, it followed the army who marched to Alcántara to cross the Tagus and lay siege to Elvas and Campo Maior. On October 31, the regiment encamped near Aldea del Puerco. From November 14 to 17, it took post at Albuquerque. It then marched to Montijo where, on November 25, it received orders to suspend hostilities. On December 28, it took up quarters at Orihuela.

In 1763, the regiment remained at Orihuela until February 14. 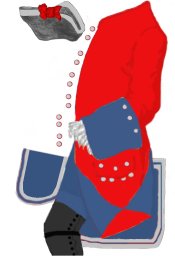 The tambour-major uniform wore the arms of the House of Farnesio on a escutcheon.

The regiment had the privilege to carry kettle-drums captured from the Austrian cavalry regiment Bersinghen in the Battle of Campo Santo on February 8, 1743.

Guidons were of crimson damask bordered in gold and silver with blue velvet streamers laced in silver.