During campaigns of this period, rivers and streams constituted natural barriers slowing down and even stopping the advance of armies, especially when they operated in enemy territory.

Often, several days were necessary to locate a point to pass a river. To pass a large river with an entire army required to be master of the city or place guarding its passage unless this army was well equipped with technical means to skirt around the strategic locks represented by these cities.

Navigable waterways were not very developed during this period and movement of troops were made by roads. Boats were essentially used behind the lines to transport supply, forage and wounded soldiers.

The present articles is based on the techniques used by the French Army but most armies of the period used similar techniques.

During campaigns, construction of bridges was made by artillery workers assisted by commandeered local boatmen under the command of artillery officers and engineers. 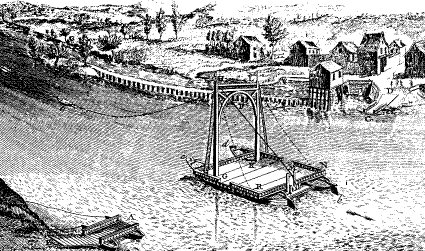 Ferryboats represented the easiest method to pass a river. Even though this technique required limited means, it was slow and laborious, especially when time came to ferry the artillery or the train. Ferryboats were thus used very occasionally. There existed three systems of ferry or flying bridges and they are described by Gauthier, among others, in his Traité des ponts published in 1716 and in the Encyclopédie of Diderot and d'Alembert:

When it became necessary to cross a river with heavy artillery or with a large number of troops, one or several fix pontoons were used. 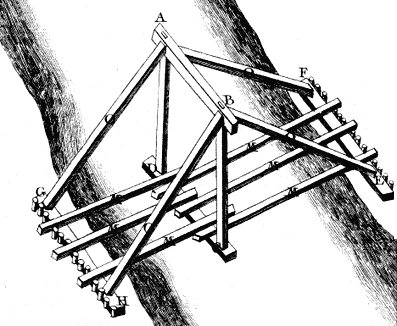 Small rivers were easily crossed using a trestle bridge or a pontoon made of barrels supporting a plank deck, thus making a kind of raft fastened to each banks by cables and capstans. If possible, these small bridges should be wide enough to accommodate six cavalrymen advancing side by side.

Trestles and sketch of a pontoon bridge built on barrels - Source: Jean-Louis Vial

When a force of infantry had to rapidly cross a small river, a simple plank deck thrown across small beams or over cables stretched by capstans was often sufficient.

For wider rivers, boat bridges were used. For this type of bridges, The Encyclopédie of Diderot and d'Alembert specifies “some of them are of very light wood to be transported in campaigns; others of wicker and pitch eand covered with oilcloth; others of boats made of ropes or tin, there were also boats made of wood with axles and wheels fixed to the boat and finally others made of copper which were the most used and which were transported on specially designed carts.”

Most often, these pontoon bridges were a disparate collection of embarkations provided by requisition by the local boatmen, of pontoons taken from the enemy and of an army own material. “Upon arriving in a country that we are conquering, we must seize all boats found on the banks, we always need them for bridges or for the transport of forage.”

There were also boats mounted on axles whose wheels acted as trestles, they carried with them the beams and planks to build the deck of the bridge. The shaft of these carts were removed to install them. These rolling bridges would allow to cross a small river no more than 2 m. deep and 12 m. wide, there were very useful for vanguards. At the camp of Einbeck in 1761, there were two such bridges who remained installed for the duration of the encampment.

The most used bridges during the XVIIIth century were made of “copper boats”, in fact wooden boats covered with copper sheets. Their use in France can be traced back to the XVIIth century as indicated by the Sieur de Guillet in his Dictionnaire des gens d'épée published in 1680. Reputedly, a certain Martinet had introduced the use of these boats in France. 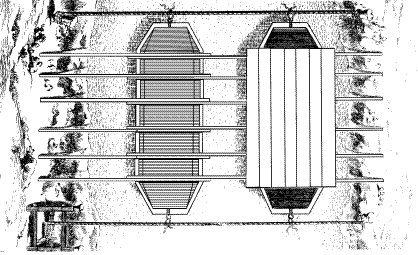 An entire team of joiners, carpenters and blacksmiths was necessary to assemble and repair these pontoon bridges.

Thus for 50 pontoons following an army, 54 carts were needed, including 4 spare carts with as many limbers and 4 wagons to transport cables, equipment and tools: 24 anchors, 8 capstans, 24 levers, 32 big stakes, 24 mallets, 12 oars, 12 hooks. There was a large assortment of ropes and cables: cinquelles, alognes, commandes, etc., all designating a specific type of cable according to its length and diameter. A total of 340 horses were necessary to transport such a pontoon bridge: 6 horses per cart and 4 horses per wagon.

In another example taken from the French army, to throw two or three pontoon bridges across a 150 m. wide river would require the following equipment:

The boats were transported on specially designed carts. The wheels were reinforced with iron pieces as for other carts. Each cart was drawn by 6 horses and transported a pontoon, 12 fir planks and 8 beams (only 6 were used, the 2 others being spare parts).

The installation of bridges and ferry systems imply that an army is master of both banks of a river. Therefore, work was always preceded by the crossing of light troops aboard nacelles or simply swimming across the river to secure the opposite bank. These light troops were then joined by the first workers who installed cables and capstans. Usually, the pontoon bridge was built along the bank where the army stood before being pivoted into the current and moored to the opposite bank.

A cavalry detachment would then immediately move across the bridge and take a forward position to protect the bridgehead.

Despite these difficulties, the building and installation of a pontoon bridge was relatively fast according to contemporary reports. In 1757, the French threw two boat bridges across the Rhine in front of Wesel in half a day. In 1758, a 780 m. long boat bridge was thrown across the Rhine near Cologne for the French army of the Comte de Clermont. It was made of a disparate collection of boats within three days.