The regiment was raised in 1690 for Colonel Margrave Christian Ernst of Brandenburg-Bayreuth from 2 companies of cavalry raised in 1689 by Colonel Baron von Lethmate and 2 companies of Mecklenburg cavalry. In 1689, the 2 initial companies fought against France; from June to October 12, they were at the siege of Bonn. In 1690, the regiment served against the Turks in Hungary. On August 19, 1691, it took part in the Battle of Slankamen. On September 11, 1697, it fought in the Battle of Zenta.

During the War of the Spanish Succession, in 1702, the regiment served against France; in April, it was at the siege of Kaiserswerth. On August 13 ,1704, it fought in the Battle of Blenheim. From 1706, it was cantoned in Neumark and Pommerania.

After the war, the regiment was stationed in East Prussia.

On August 22 1718, the regiment received a squadron of the disbanded regiment von Heyden. It now counted 5 squadrons.

In 1742, during the War of the Austrian Succession (1740-48), the regiment served against Austria; on May 17, it fought in the Battle of Chotusitz. From September 10 to 16, 1744, it took part in the siege of Prague. On May 22, 1745, it was at the clash of Neustadt in Upper Silesia. The same year, it took part in the battles of Hohenfriedberg (June 4) and Soor (September 30). On November 23, at the clash of Katholisch-Hennersdorf, it took a standard, 3 colours and 4 guns. Finally, on December of the same year, it fought in the Battle of Kesselsdorf.

Lower Silesia was the inspectorate of the regiment and its garrison places were Grottkau, Münsterberg in Silesia, Ohlau and Strehlen.

By 1806, the regiment was known as the von Heising Cuirassiers. That year, on October 14, it took part in the Battle of Auerstädt where it was deployed on the left Wing. It suffered heavy losses. The rest of the regiment surrendered at Pasewalk on October 29. The regiment was not re-raised. Remnants went into the new 1st Kürassiers.

On August 26, 1756, when the Prussian army proceeded to the invasion of Saxony, the regiment was part of the left column led by the Prince of Bevern. This column had concentrated in the area of Lübben, then advanced through Lusatia by Hoyerswerda and Bautzen, to Hohenstein (September 8) then to Lohmen north of the Elbe near Pirna. On October 1, the regiment took part in the Battle of Lobositz where it was assigned to the cavalry brigade of Major-General Schonaich in Kyau Division. In this battle, it lost 6 officers, 16 NCOs and 130 troopers. On October 23, when Keith's army left Lobositz to return to Pirna country, the regiment joined Frederick II at Linai to cover Keith's advance. On October 28, the whole force reached Gross-Sedlitz near Pirna and the regiment took up its winter quarters soon afterwards.

From March 31 to April 18, 1758, the regiment covered the siege of Schweidnitz. It then took part in the invasion of Moravia, covering the siege of Olmütz from May 27 to July 2. It followed the Prussian army when it retreated to Silesia. On August 10, the regiment was part of the corps who accompanied Frederick when he marched from Silesia to join Dohna to contain the Russian invasion of Brandenburg. On Tuesday August 22, this corps made a junction with Dohna at Manschnow. On August 25, the regiment fought in the Battle of Zorndorf where it formed part of the first line of the cavalry left wing. During the battle, led by Seydlitz, the regiment counter-charged and overwhelmed the Russian cavalry, taking a battery of heavy guns and overthrowing the Russian right wing. On September 2, a week after the Battle of Zorndorf, when it became clear that the Russian army was slowly retiring towards Landsberg, Frederick assembled the corps that he had brought with him from Silesia and left for Saxony where his help was badly needed. On October 10, the regiment took part in the Battle of Hochkirch where it was initially deployed in the second line of the left wing under Seydlitz.

On September 25 1759, the regiment took part in the clash of Hoyerswerda.

On February 15, 1761, the regiment took part in the combat of Langensalza. On August 14 it fought in the clash of Kloster Wahlstadt. 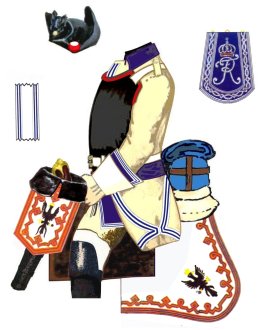 Troopers were armed with a heavy straight-bladed sword, a pair of pistols and a musket. They wore a blackened breastplate edged crimson and fastened by white straps. The musket strap was white edged with the regimental lace.

N.B.: silver embroidered buttonholes and a silver aiguillette on the right shoulder decorated the full dress uniform, which also had red distinctive, but were not present on the service uniform

The square standards were made of damask. The cords and tassels were silver and black. The pole of the standard was a black tournament lance reinforced with iron hinges and gold finial.

The standard bearers had dark blue standard bandoliers, edged and fringed in gold.