In 1717, the regiment received the same establishment as regular French regiments.

On March 10, 1749, the regiment incorporated the disbanded “Fleury Infanterie.”

During the Seven Years' War, the regiment ranked 64th and was under the command of:

In December 1762, when the French Army was reorganised, the regiment was incorporated into Poitou Infanterie.

In 1756, the regiment took part in the amphibious expedition against Minorca and in the siege and capture of Fort St. Philip.

In 1757, the regiment was sent to reinforce the Army of the Lower Rhine. It made its junction with the main body in Hessen in August. At the end of the year, it took its winter-quarters in the first line of the French army at Duderstadt.

On Tuesday January 2 1759, at about 5:00 a.m., Nassau Prince Louis Infanterie presented itself before the Sachsenhausen Gate of Frankfurt and was admitted as previously agreed. As soon as it had entered the town, the regiment ordered the town-guard to deposit arms and to admit 5 other regiments (Beauvoisis (2 bns), Rohan Montbazon (2 bns), Rohan Rochefort (2 bns), Bentheim (2 bns) and Royal Deux-Ponts (4 bns)). These regiments then seized the artillery on the walls and all the other gates, easily capturing the City of Frankfurt. This very important town remained under French control for the last four years of the war. By May 10, the regiment was part of the corps under the command of the Comte de Noailles who had taken position near Deutz on the right bank of the Rhine. In June, during the French offensive in western Germany, the regiment was part of the main army under the command of the Marquis de Contades and was deployed in the first line of the infantry centre. 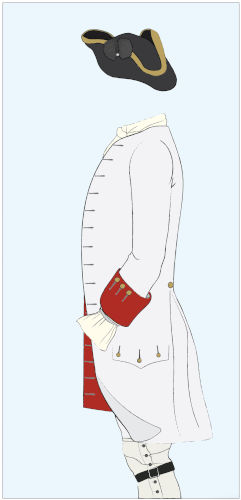