Difference between revisions of "Royal-Allemand Cavalerie"

The regiment entered into the French service in 1639 after the death of the duke of Saxe-Weimar. The regiment was reconstituted on August 10 1671 by the count of Königsmark. Originally German, it later recruited in the French provinces and in the Palatinate. On November 15 1688, the regiment took the name of “Royal-Allemand”.

During the War of the Austrian Succession, the regiment first took part in the invasion of Bohemia in 1741. On June 27 1743, it took part to the battle of Dettingen. In 1744, it was on the lines of the Lauter. In 1745, it was at Pfaffenhofen.

In 1756, the regiment counted two squadron.

When the French Cavalry was reorganised on December 1 1761, the regiment was increased to 4 squadrons. The 2 additional squadrons came from the Wurtemberg Cavalerie who was incorporated into Royal-Allemand Cavalerie. However, effective incorporation seems to have taken place only on April 10 1763 at Lauterburg.

In 1757, the regiment joined the Lower Rhine Army commanded by the maréchal d'Estrées for the planned invasion of Hanover. From April 27 to June 17, it was part of the Reserve under the prince de Soubise. On September 8, after the Convention of Kloster-Zeven, it followed the main body, led by the maréchal de Richelieu, who encamped at Halberstadt in Prussian territory from September 28 to November 5. The regiment was placed on the left wing of the second line. At the end of the year, it took its winter quarters in the first line of the French Army at Poltz.

At the end of January 1758, the regiment was assigned to the army that Louis XV planned to send to Bohemia for joint operations with the Austrian Army. However, when the Allies launched their surprise winter offensive in West Germany, the regiment had to retreat towards Düsseldorf and Deutz with the bulk of Broglie's army. It passed the Rhine on April 3 and 4. In the first days of June, as a French army prepared for an offensive in Hesse, the regiment was part of a detachment under the command of Broglie who followed up Ysenburg's Allied corps during its retreat. By July, it had joined Soubise's army assembling near Friedberg in Hesse. On July 23, the regiment took part to the combat of Sandershausen where it was initially placed in the second line. It fought in the cavalry combats in the plain adjoining the Ellenbach woods where the French cavalry was finally broken. It then rallied and reinforced the threatened French left wing. On October 10, it was present at the battle of Lutterberg where it was part of the Reserve of cavalry. 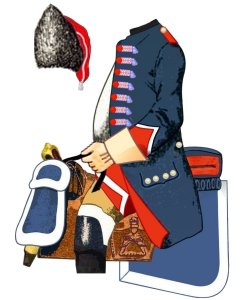 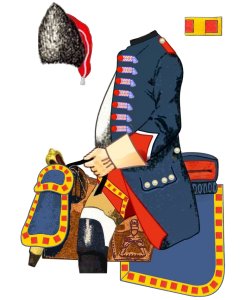