After the capture of Besançon and the final annexation of Franche-Comté, a regiment was raised on August 9, 1674 by the Marquis de Listenois to reward the nobility of the County of Bourgogne. Shortly after its creation, the regiment left Besançon and joined the Army of Catalonia, serving with this army till the end of the Franco-Dutch War (1672-78).

In 1685, when the Marquis de Listenois retired, Louis XIV took the regiment who received the name of “Royal-Comtois”.

In 1688, during the Nine Years' War (1688-97), the regiment was attached to the Army of Germany and contributed to the capture of Philisbourg, Mannheim and Frankenthal. In 1690, the regiment was transferred to the Alps and was at the capture of Cahours, at the Battle of Staffarda, then at the capture of Veillane, Carmagnola and Montmélian. In 1692, the regiment was increased to two battalions (each of 13 companies). It was recalled to Flanders where it participated in the siege of Namur and in the Battle of Steenkerque where it greatly distinguished itself. In 1693, it initially served on the Moselle before being sent back to Italy where it the Battle of Marsaglia. It remained in Italy until 1696. Recalled to France, it was sent on the Meuse. In 1697, it formed part of the force covering the siege of Ath.

During the first two years of the War of the Polish Succession (1733-35), the regiment was not involved on any theatre of operation. In October 1734, it was sent to Italy. In 1735, it took part in the capture of Revere, Reggio, Reggiolo and Gonzague. In returned to France in September 1736 and was was stationed on the island of Oléron.

In 1741, during the War of the Austrian Succession (1740-48), the regiment joined the Army of Germany. In 1742, it took part in the invasion of Bohemia, and in the capture of Elnbogen and Kaaden, in the relief of Braunau and Egra; in 1743, in the glorious defence of Deckendorf. In 1744, the regiment was transferred to Flanders where it participated in the sieges of Menin, Ypres and Furnes, in the Combat of Augenheim and in the capture of Freiburg. In 1746, it was sent back to Italy. On November 7, 1746, the regiment was increased to two battalions. In 1747, it took part in the defence of Genoa where it remained in garrison till December 15, 1748.

On December 27, 1748, when it returned to France, the regiment was reduced to a single battalion. However, on March 10, 1749, it incorporated the disbanded Bassigny Infanterie and was re-established to two battalions.

During the Seven Years' War, the regiment ranked 59th. Its nominal commander was the king but effective command was assumed by the successive lieutenant-colonels:

The ordonnance of December 10, 1762, transferred the regiment to the ports and colonies service.

In April 1756, the regiment took part in the amphibious expedition against Minorca. On June 27, when the French stormed Fort St. Philip de Mahon, the regiment was part of the left attack directed against the Strugen, Argyle and Queen’s redoubts. In this action, the regiment lost Captain de Sartre and Sub-Lieutenant Dufard, killed; and Captain Beaumesnil and 1 lieutenant, wounded. After the conquest of Minorca, the regiment returned to France where it assumed the defence of the coasts of Flanders.

In 1757, the regiment was initially sent to reinforce the Lower Rhine Army. It made its junction with the main force in Hessen in August. It seemed that the regiment was then redirected to Soubise's Army of Saxony and then again to the Lower Rhine Army where it was by Mid September. At the end of the year, it took up its winter quarters in the second line of the French Army: one battalion in Göttingen, the other in Dransfeld.

In February 1758, when Ferdinand of Brunswick launched his winter offensive in Western Germany, the regiment retired on the Rhine with the rest of the French army. From March 30 to April 4, it was in the first line of Clermont's Army in the camp of Wesel on the Lower Rhine. In April, when Clermont redeployed his army along the Rhine, the regiment was placed in the third line at Roermond. After the successful crossing of the Rhine by Ferdinand's Army on May 31, the regiment retired towards Rheinberg where it joined Clermont's Army on June 2. It remained in this camp until June 12 and was placed in the centre of the second line.

The regiment then returned to France where it was stationed on the coasts of Flanders, to the exception of 160 volunteers who remained in Germany under the command of Captain Muret. In contemporary relations, this detachment would often be designated as the “Volontaires de Muret” and assimilated to light troops.

On December 29, 1759 near Winterwitten, the detachment of Captain Muret, along with 60 volunteers from Turpin Hussars and one gun was attacked by 400 men from Luckner's Hussars, 100 cavalrymen from various regiments, 400 infantrymen and two guns. At the beginning of the engagement, the hussars took flight. Muret and his volunteers, attacked in flank and rear, fought for 90 minutes and surrendered only when a third of the detachment had been killed. 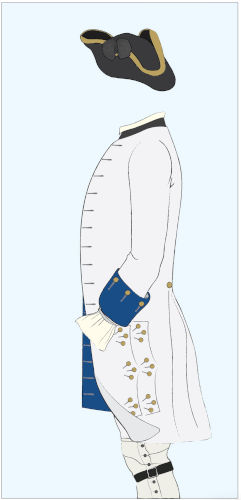