In 1738, France intervened in Corsica at the request of the Republic of Genoa to quench the whims of independence of the island. However, after the end of the rebellion, the Genoans imposed so harsh conditions that the French decided to offer Corsicans to serve in the French Army. On August 10, 1739, a royal decree created the “Royal-Corse Infanterie.” The regiment, which initially consisted of twelve companies, was raised under the supervision of M. de Maillebois who commanded the French troops in Corsica. Only the colonel and the lieutenant-colonel were French, all other officers were chosen among the most influential leaders of Corsica. In November, the four first companies embarked at Calvi For France. They were soon followed by the rest of the regiment.

During the first campaigns of the War of the Austrian Succession (1740-48), the regiment initially guarded the frontiers with Flanders. In 1743, it was initially posted at Berghes but was sent to Dunkerque in preparation of the planned expedition in Scotland. At the beginning of 1744, it embarked for Scotland but a storm having caused heavy damages to the fleet, the expedition was canceled and the regiment rejoined the army of the Maréchal de Saxe and served at the sieges of Menin , Ypres and Furnes. In 1745, it formed part of the Eu Brigade and fought in the Battle of Fontenoy. It then took part in the reduction of Tournai, Oudenarde, Termonde and Ath. In 1746, it formed a brigade with Dauphin Infanterie and fought in the Battle of Rocoux. At the end of the campaign, the regiment was placed in garrison at Antwerp where it spend the first five months of 1747. It then contributed to the capture of Lierre. During the Battle of Lauffeld, it was charged to guard the town of Tirlemont and was not involved in combat. It then served at the siege and capture of Berg-op-Zoom. In 1748, it took part in the siege of Maastricht.

In 1749, the regiment returned to France where it was placed in garrison in Bouchain.

On the eve of the Seven Years' War, this regiment counted only one battalion.

During the Seven Years' War, the regiment ranked 103rd, it was under the nominal command of king Louis XV and under the effective command of its successive lieutenant-colonels:

On December 21, 1762, the regiment was incorporated into Royal Italien Infanterie. Effective incorporation took place in March 1763 at Perpignan. The regiment would be re-established in 1765.

On April 23 1756, fearing for the coasts of Provence which were only guarded by II./Cambis Infanterie and five poor quality militia battalions, Richelieu ordered the regiments of La Viefville Saint-Chamond Infanterie and Royal Corse to reinforce this area.

By August 1, 1757, the regiment had been transferred to the Isle de Ré in the Aunis country. 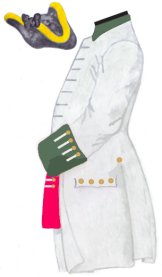