This regiment was raised at Perpignan with troops from Roussillon and Catalonia for the Cardinal de Mazarin according to a commission issued on May 25 1657. It originally counted 3,000 men and was known as “Catalan-Mazarin”.

In 1658, almost at the end of the Franco-Spanish War (1635–59), the regiment was sent to Flanders where it took part in the siege of Gravelines before assuming garrison duties in Oudenarde until the restitution of this city to Spain. It then returned to Perpignan.

On March 13 1661, after the death of the cardinal the regiment was reduced to 12 companies and renamed “Royal-Catalan”.

In March 1666, the regiment participated in a training camp at Monchy, near Compiègne.

On January 27 1667, the regiment was renamed “Royal-Roussillon”. The same year, at the outbreak of the War of Devolution (1667–68), the regiment served in Flanders, contributing to the capture of Lille. In 1668, it took part in the first conquest of Franche-Comté.

In 1670, the regiment took part in the submission of Lorraine and in the sieges of Épinal, Chasté and Longwy. It then returned to Perpignan.

After the Treaty of Nijmegen, the regiment assumed garrison duties in Southern France.

In 1684, the regiment quitted Longwy to take part in the siege of Luxembourg.

After the Treaty of Riswyck, the regiment remained in Hainaut.

In 1733, at the outbreak of the War of the Polish Succession (1733-35), the regiment was sent to Italy where it took part in the capture of Pizzighetone and of the Castle of Milan. In 1734, it participated in the siege of Tortona, in the affairs of Colorno, in the Battle of San Pietro, in the combat of the Secchia and in the Battle of Guastalla. In 1735, it took part in the sieges of Revere, Reggio, Reggiolo and Gonzaga. In 1736, it returned to France.

In April 1739, the regiment was sent to Corsica where it took part in the engagements of San-Giacomo and Bastelica.

In 1741, during the War of the Austrian Succession (1740-48), the regiment was recalled from Corsica to France where initially served on the frontiers of Flanders. For two campaigns. In 1743, it operated on the Rhine. It was later sent to rendezvous with the army retiring from Bavaria and then fought in the combat of Rheinweiler. In 1744, it took part in the combat of Augenheim and in the siege of Freiburg; in 1746, in the siege of Mons. It was then transferred to Provence. On its way, a second battalion was raised at Briançon. In 1747, it took part in the attack on the defile of Assietta.

On the eve of the Seven Years' War, this regiment counted two battalions and had prévôté (provostship).

After 1763, the regiment was among the 24 regiments dedicated to colonial service. It was initially stationed in Corsica.

In March 1757, the 1st battalion, which had remained in France, sent four of its companies to Lunéville to guard the King of Poland, replacing the Gardes Lorraines in this duty. The companies of Gardes Lorraines were then allowed to join the rest of their regiment at Metz. Somewhere between August 23 and September 6, the remainder of the 1st battalion joined the Army of Saxony, led by the Prince de Soubise, in the area of Erfurt and Eisenach where it was brigaded with Piémont Infanterie. On September 27, it was brigaded with Royal Deux-Ponts Infanterie in the first line of the left wing of the Franco-Imperial Army. On November 5, the 1st Battalion was at the disastrous Battle of Rossbach where it formed a brigade along with Royal Deux-Ponts Infanterie in the first line of the centre. In this battle, Grenadier-Captain Derons and 1 lieutenant were wounded. At the end of the year, the 1st Battalion took its winter-quarters in Wolfhagen in Hessen.

In April 1758, when the Comte de Clermont redeployed his army along the Rhine, the 1st Battalion was stationed in the area of Friemersheim. After the successful crossing of the Rhine by the Allied army of Ferdinand of Brunswick on May 31, the 1st Battalion retired towards Rheinberg where it joined Clermont's Army on June 2. It remained in this camp until June 12 and was placed in the centre of the first line. On August 5, the grenadier company of the 1st Battalion was detached from Cologne to form part of Chavigny's advanced guard and took part in the Combat of Mehr where it was engaged in the fighting inside the village. In October, the 1st Battalion left Germany, returned to France and took garrison at Nancy.

In 1759, 4 companies of the 1st Battalion were sent once more to Lunéville to guard the King of Poland. The rest of the battalion was again brigaded with Piémont Infanterie. On April 13, the battalion took part in the Battle of Bergen where it formed part of the first line of the right wing under the command of Prince Camille de Lorraine. The battalion was among the infantry deployed in support behind the village of Bergen. It timely came to the rescue of the French infantry occupying Bergen, driving the Allies back.

In April 1756, the 2nd Battalion was sent to Canada where it served under the Marquis de Montcalm. On May 12, it arrived at Québec. On June 10 and 11, it left Québec for Montréal. It was then sent to Fort Carillon (present-day Ticonderoga) to reinforce it in prevision of a British offensive. On November 12, it left Carillon to take its winter-quarters in the region of Montréal.

In May 1757, the 2nd Battalion worked at the completion of Fort Carillon. By July 20, a French force totaling 8,000 men (including this unit) was gathered at Carillon. On August 1, this force left Carillon with Montcalm and advanced upon Fort William Henry. The battalion then took part in the siege of Fort William Henry which lasted from August 5 to 9. On August 16, after the capture and destruction of the fort, the French force reembarked for Carillon. At the beginning of September, the battalion was back to Carillon where it continued work on fortifications. On October 20, the battalion set off from Carillon to take its winter quarters, leaving a piquet behind to garrison the fort during winter. On October 27, the battalion took its winter-quarters at Boucherville.

In mid June 1758, the 2nd Battalion left its quarters and moved towards Carillon. On June 30, the battalion was part of the detachment that Montcalm sent to the left bank of the channel connecting Lake Saint-Sacrement (present-day Lake George) to Lake Champlain. On July 7, it worked at the entrenchment in front of the fort. On July 8, the battalion took part in the victorious Battle of Carillon where it was deployed in the centre under Montcalm. In this battle, the regiment lost Captain Ducoing and 18 men. Between November 1 and 5, the entire French army set off from Carillon to move to its winter-quarters, leaving detachments from various battalions to guard the fort.

On May 29 and 30 1759, the Chevalier de Lévis arrived at Québec with all 5 battalions of regulars (La Sarre Infanterie, Royal Roussillon Infanterie, Languedoc Infanterie, Guyenne Infanterie and Béarn Infanterie) along with the Militia of the Government of Montréal. While awaiting the arrival of the British fleet, the French army encamped on the right bank of the Saint-Charles River and fortified it to serve as a second line of defence if ever the British were able to land at Beauport. On June 26, the French army moved to its encampment at Beauport. The 5 battalions of regulars, forming a single brigade, held the centre. On July 31, the battalion took part in the victorious Battle of Beauport where it was initially sent to support the part of the line threatened by the British manoeuvres. When the British landed and advanced against the redoubts on the strand, the regiment advanced directly behind the entrenchments crowning the heights, supported by Guyenne Infanterie. Together, they drove back the British assault. On September 13, the battalion took part in the Battle of the Plains of Abraham near Québec where it was deployed on the left wing. After the battle, the regiment followed the French army in its retreat towards Jacques-Cartier. On September 24, the regiment and Guyenne Infanterie were sent to Deschambault to prevent a landing of the British and to protect the line of communication with Trois-Rivières. On October 25, Lévis sent the battalion along with Guyenne Infanterie as additional reinforcements for Bourlamaque at Île-aux-Noix to stop the advance of Amherst's forces. At the end of November, the French army of Île-aux-Noix retired into its winter-quarters after completing the fortifications of the island. The regiment took its winter-quarters from Boucherville to Laprairie.

By March 1760, 51 men of the battalion had been detached to Saint-Jean while 12 were unfit for duties. This left 316 men available for the expedition against Québec. The latter were supplemented by 298 men from the militias of Boucherville, Longueuil and La Prairie who were integrated into the battalion. From April 21 to 25, transport vessels gradually sailed from Montréal for Québec. Overall the battalions then counted 24 officers, 305 regulars, 279 militia and 13 non-combatants for a total of 621 men. On 28 April, the regiment fought in the victorious Battle of Sainte-Foy. On May 23, the battalion along with Guyenne Infanterie departed from its camp on the banks of the Jacques-Cartier River. In mid August, La Reine Infanterie and Royal Roussillon Infanterie were sent to Saint-Jean under the command of M. de Roquemaure who was later reinforced with all the Milice du district de Montréal. On September 9, after the capitulation of Montréal, the battalion still counted 297 men and 24 officers. On September 15, as per the terms of the capitulation, the battalion was embarked aboard British transports who reached Québec on October 10 and 11 and then sailed for France where they arrived in December.

After the return of the 2nd battalion to France in 1760, the regiment was reorganised by the regulation of February 1 1761 into only 12 companies of 20 fusiliers and one company of 40 grenadiers.

Contrarily to the battalions sent to Canada in 1755, those who formed part of the reinforcements sent in 1756 wore the standard uniform of the regiment. Therefore, the Continental and Canadian uniforms were identical. 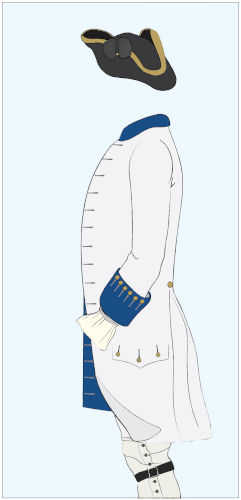 Jean-Louis Vial for information on the colonels of the regiment