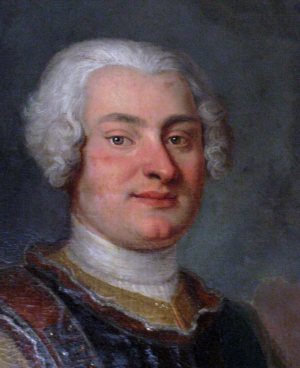 After she became the King's mistress, Fatima was christened Maria Anna and moved to the Dresden court. After the birth, Fatima was married, at the instigation of Augustus, to his chamber man Johann Georg of Spiegel. Frederick Augustus moved to the estates of the Spiegel Family, but his father cared about his education.

Fatima, despite her marriage, remained a mistress of Augustus. In 1706, she gave birth to the King's second child, a daughter, called Maria Anna Katharina. However, soon Frederick Augustus and his sister became orphans: Johann Georg of Spiegel died in 1715 and their mother Fatima five years later. Augustus the Strong took the guardianship of the children.

In 1724, Augustus the Strong recognized and legitimized the two children he had had with Fatima. Shortly after, he raised both, as his right of King of Poland, to the Polish title of Count Rutowsky and Countess Rutowska. The coat of arms awarded to them shows a Saxon rhombus wreath as well as a Polish White Eagle. On October 8 of the same year, Frederick Augustus, now Count Rutowsky, received from his father the highest Polish decoration: the Order of the White Eagle. He had the rank of colonel in the Saxon Army.

After a journey to Munich and Venice, Rutowsky arrived in February 1725 at the court of the King of Sardinia and Duke of Savoy, Victor Amadeus II in Turin, where he took command of the Piedmont regiment and was garrisoned in Alessandria. He really enjoyed his time there, and maybe that was the reason why he wrote his father asking to give to him the permission to enter in French service in order to remain in Turin.

His father had different plans for his son. He demanded his immediate return.

On May 26 1727, Rutowsky was appointed Major-general in the Saxon Army but, shortly after we find him in the service of the Prussian King (in Regiment von Thiele). He learnt his lesson perfectly.

In 1729, the General Count Rutowsky was again in Saxon service.

During the following War of the Polish Succession, the Saxon Field Marshal Johann Adolf II, Duke of Saxe-Weissenfels (1685–1746) led the well prepared Saxon troops into Poland (October 1733). For the next 3 years, the Saxon army remained mainly in southern Poland, until the coronation of the Elector Frederick August II of Saxony as King of Poland after the defeat of the rival candidate for the Polish throne, Stanisław Leszczyński. The same year, Johann Adolf inherited Saxe-Weissenfels when his brother Christian died without children. During this war, Rutowsky participated in the campaigns in Poland and on the Rhine.

On January 1 1736, Rutowsky was appointed Lieutenant-general and Commander of the Saxon Garde du Corps.

In 1737, Rutowsky was the leader of the Saxon Contingent in the war against the Turks in Hungary.

On April 21 1738, Rutowsky was appointed General of the Cavalry.

On January 10 1742, Rutowsky was appointed commander of a dragoon regiment.

During the Second Silesian War, Prussian troops crossed the Saxon border, and Saxony and Austria agreed to proceed together against Prussia. Saxon troops planned to cut off the Prussians in northern Silesia, while Austrian troops would advance from the south. But in June 1745, they were defeated at the battle of Hohenfriedberg. Johann Adolf Saxe-Weissenfels planned a new offensive campaign in September 1745, but he changed his mind two weeks later. Because of this, he was replaced as commander-in-chief by Count Friedrich Augustus Rutowsky.

On December 15 1745, at the battle of Kesselsdorf, the Saxon Army suffered a crucial defeat against Prince Leopold I of Anhalt-Dessau. The Elector removed his half-brother Rutowsky from command and reinstated Johann Adolf, who began his duties as commander on the same month. Furthermore, Johann Adolf was appointed chief of the Saxon government during the absence of the Elector and of the Minister Heinrich Brühl.

Johann Adolf retreated with the Saxon troops to Bohemia. In 1746, he suffered a heart attack and died at age 61.

In 1756, at the sudden outbreak of the Seven Years' War, Rotowsky had in his hands a blunted weapon. He simply had no chance against the advancing Prussian Army. During the Prussian invasion of Saxony, Rutowsky concentrated the Saxon Army of only 18,100 men in the strong defensive position near Pirna. He withstood a siege of 6 weeks, but lacking food and ammunition, he had to capitulate on October 16 1756. He became a prisoner of King Frederick II of Prussia.

During the years of war, Rutowsky stayed in Saxony.

On March 8 1763, just after the Treaty of Hubertusburg, Rutowsky renounced all his military functions.

Rutowsky died one year later after a long disease, aged 62.

Dr Marco Pagan for the initial version of this article